Like many diseases of stealth, hypertension can afflict a person without any telltale outward symptoms. It works its harm by taxing an overworked cardiovascular system, forcing the heart to work harder and potentially damaging arteries and other organs. It is the leading risk factor for stroke and contributes to other chronic diseases, including heart disease, metabolic syndrome, diabetes, weakened blood vessels in the kidneys and eyes and may affect brain function. High blood pressure was recently ranked the top risk factor for the global burden of disease. The good news is that it can usually, but not always, be treated and controlled successfully with one or more drugs. Improving one’s lifestyle habits through weight control or weight loss, consuming a healthy diet and increasing physical activity can also reduce blood pressure.

Dietary strategies to reduce blood pressure include consuming less sodium, increasing food sources of potassium, adhering to a DASH diet or the Mediterranean Diet and limiting alcohol intake. Individual foods, such as tree nuts, polyphenol-rich olive oil, apples/pears and the long-chain omega-3 PUFAs (n-3 LC-PUFAs) EPA and DHA have also been associated with a lower incidence of hypertension or lower blood pressure. An extensive list of such foods and their constituents has been described recently.

There is limited evidence that flaxseed oil is associated with lower blood pressure. The latter is of particular interest because flaxseed contains large amounts of alpha-linolenic acid (ALA), an 18-carbon n-3 PUFA, lignans and dietary fiber. The bioavailability of ALA is greatest from flaxseed oil and to a lesser extent from milled flaxseed. Whole flaxseeds are poorly digested and do not provide appreciable amounts of ALA. Several studies have reported that flaxseed oil consumption leads to increased levels of EPA and DPA, but does not affect DHA levels. Flaxseed is a relatively rich source of polyphenols and contains dietary fiber, which contributes to lower diastolic blood pressure. Flaxseed lignans have been reported to have cholesterol-lowering properties.

Several studies have reported beneficial effects of flaxseed consumption on risk factors or markers of cardiovascular disease, but few have examined the effect of flaxseed on blood pressure. This question was explored in a recent study in patients with peripheral artery disease who frequently have hypertension. The study was designed to compare the effect of foods rich in milled flaxseed or milled wheat on blood pressure over 6-months. Participants were recruited from St. Boniface General Hospital, Winnipeg, Manitoba, Canada. Eligibility criteria included clinically diagnosed peripheral artery disease of 6 months or more duration, an ankle brachial index < 0.9 (indicative of early peripheral artery disease) and absence of moderate or severe renal failure, bowel disease or inability to walk. Participants were 67 years of age on average, ate no more than 2 fish meals per week and 90% were current or former smokers. Seventy-five percent of participants met the criteria for hypertension defined in the Seventh Report of the Joint National Committee on Prevention, Detection, Evaluation, and Treatment of High Blood Pressure.

The patients were given prepared foods containing 30 g of milled flaxseed or wheat, which they consumed daily for 6 months. Blood pressure was measured using a mercury sphygmomanometer (Illustration) using the American Heart Association protocol with readings taken at baseline, 1 and 6 months after the study began. A total of 110 patients enrolled in the study and 86 completed the 6-month trial. Withdrawals 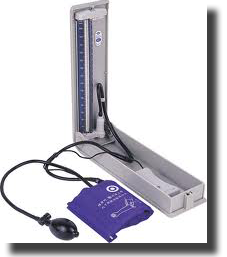 were similar in each group. Of the enrolled participants, 75% had clinically diagnosed hypertension, 79% were taking antihypertensive drugs and 90% were on antithrombotic medication. Average baseline systolic and diastolic blood pressures were 143 and 77 mm/Hg, respectively.

Over 6 months, participants’ body weight, waist circumference, ankle brachial index and markers of renal function did not change between or within groups. Plasma concentrations of ALA and enterolignans, which are relatively high in flaxseed meal, were used to assess dietary compliance. Both indices rose sharply in the flaxseed group, but remained constant in the wheat (placebo) group. As has been previously reported, plasma EPA concentrations increased significantly at 1 and 6 months, but DHA levels increased only slightly and not significantly. The investigators noted that within one month total enterolignans increased by about 10-fold, with the enterodiol component rising nearly 50-fold.

In the flaxseed group, both systolic and diastolic blood pressures fell within one month, reaching significantly lower levels at the end of 6 months, while the systolic pressure rose slightly in the placebo participants (Table).

The investigators analyzed the relationships between plasma ALA and enterolignan levels with systolic and diastolic blood pressures. They observed significant inverse relationships between both blood pressure measures and plasma ALA and enterodiol, and between enterolactone and diastolic pressure, but none with total enterolignans. As plasma levels of EPA increased significantly after 6 months’ intake of milled flaxseed, it would have been useful to know whether the changes in EPA levels were also associated with lower blood pressure.

The key finding of this study was a significant reduction in systolic and diastolic blood pressure in patients with peripheral artery disease and mildly elevated systolic blood pressure who consumed 30 g per day of milled flaxseed for 6 months. Body weights did not differ between the groups throughout the study. Control patients who consumed milled wheat did not experience reduced blood pressure. The reduction in blood pressure occurred in spite of continued medication with antihypertensive drugs. The authors also noted that participants with the highest systolic pressures (> 140 mm Hg) experienced the greatest blood pressure lowering, suggesting that such patients would obtain the greatest benefit from consuming milled flaxseed. 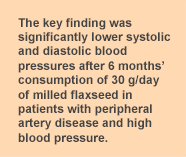 It is worth noting several aspects of this study. One is the high intake of milled flaxseed of 30 g per day. A typical serving of ground flax meal is about 13 g, so achieving this amount might require ingenuity. Typically for studies using whole foods, it is uncertain which components of the diet were most responsible for the observed effects. With milled flaxseed, both ALA and enterolignans are candidate agents and these were significantly associated with the reductions in blood pressure. Whether the higher EPA levels would also have contributed is unknown. There is evidence linking higher serum EPA with lower blood pressure in some, but not all studies. Other components of milled flaxseed, such as dietary fiber and peptides might also have contributed to these observations. Readers might also note the substantial variation in blood pressure measurements, which suggests highly variable patient responses. Measurements of plasma PUFAs showed nonsignificant changes in DHA during the study in both groups, suggesting that the participants did not alter their fish consumption or begin taking fish oil. The investigators also noted that the peripheral artery disease of the participants did not deteriorate over the course of the study.