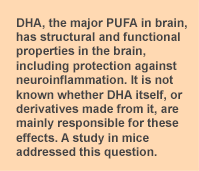 DHA, the major PUFA in the brain, is required for optimal fetal and infant development of the brain, retina and nervous system and is vital for the healthy functioning of these tissues throughout life. DHA is important in many cell communication pathways, in the ability of neuronal connections to adapt (synaptic plasticity) and for neurite growth, to name several functions. DHA is also the precursor of several specialized pro-resolving mediators (SPM) that actively reduce inflammation and promote homeostasis in tissues. These mediators include resolvins, (neuro)protectins and maresins, which have been shown to inhibit inflammatory responses, reduce tissue damage, promote cell survival, inhibit the production of proinflammatory mediators, and suppress neutrophil migration and infiltration (see preceding article). These substances have potent effects in many animal models of human disease, including colitis, lung injury, obesity-related inflammation, ischemic stroke injury, neuroinflammation and Alzheimer’s disease. As pointed out in a recent review, there is little, if any, direct evidence that DHA itself protects against neuroinflammation, although higher dietary or brain DHA levels protect against neuroinflammation in several animal models of disease. What is unclear is whether these effects can be attributed to DHA or to its anti-inflammatory derivatives or both. Richard Bazinet’s group at the University of Toronto, Canada, sought answers to this question by using a transgenic mouse model and dietary strategies to increase brain DHA levels. They evaluated the effect of unesterified DHA and 17S-HpDHA, a more immediate precursor of neuroprotectin D1 than DHA, on neuroinflammation in the mouse hippocampus (Figure) that was induced by the injection of lipopolysaccharide directly into the brain. 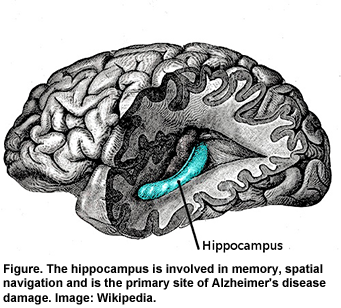 The transgenic mice contained the fat-1 gene, which confers the ability to synthesize long-chain omega-3 PUFAs (n-3 LC-PUFA) from n-6 PUFAs, a conversion humans cannot perform. As a result, fat-1 mice have significantly lower levels of linoleic and arachidonic acids and significantly higher levels of EPA, DPA and DHA in their brain cells. Wild-type littermates without the fat-1 gene were used for comparison. Both sets of mice were fed 10% safflower oil diets, which provides only 0.12% EPA and DHA. Fish oil-fed animals received an 8% safflower oil diet enriched with 2% menhaden oil, providing 3.6% EPA and DHA. Under normal circumstances, DHA resides mainly in the phospholipids of membranes, from where it is released in unesterified form by the activity of phospholipase A2. Usually, the pool of unesterified DHA is small. The fat-1 mouse, however, has a significantly larger pool of unesterified DHA (~0.8 nmol/g) compared with the wild-type animal (~0.3 nmol/g), as shown in the analysis of unesterified DHA in the hippocampi of transgenic and wild-type mice. The pool of arachidonic acid did not differ between the two groups of mice.

To examine whether the fat-1 mice compared with the wild-type mice differed in their neuroinflammatory responses, the investigators injected lipopolysaccharide, a highly inflammatory substance, into the cerebral ventricle of the mice 24 hours before sacrifice and examined the hippocampi from both groups. Triggers of neuroinflammation activate the release of arachidonic acid from membranes, leading to the increased production of proinflammatory mediators such as prostaglandin E2. Expression of the genes for many of the enzymes related to inflammation were significantly reduced in the fat-1 mice compared with the wild-type animals, as reported previously. Lipopolysaccharide injection resulted in significant increases in interleukin-1β (IL-1 β), a marker of astrocytes (GFAP), a marker of nuclear factor-κB, the chemokine CCL3 and iNOS, a marker of oxidative stress, in both groups of animals. However, the inflammatory responses in the fat-1 mice were significantly lower than in the wild-type animals, with a significant gene-treatment interaction for all measures except GFAP and the subunit marker of nuclear factor-κB. These responses could only be partly explained by the n-3 PUFA profile in the fat-1 mice.

Because the fat-1 mouse is only partly reflective of the effects of increased DHA and reduced n-6 PUFAs in normal animals, its relevance to situations without gene modification is limited. For this reason, the investigators repeated the experiments in wild-type mice, which had their brain phospholipid DHA increased through diet and compared them with the fat-1 animals. Previous work had demonstrated that feeding wild-type mice a 2% fish oil diet from weaning mimics the effects on brain DHA and arachidonic acid observed in the transgenic mice fed the safflower oil diet. Repeating this protocol, the investigators observed that the inflammatory mediators and cell markers in the hippocampi of the fish-oil-fed wild-type mice did not differ significantly from those in the fat-1 mice after the lipopolysaccharide stimulus. The only statistically significant effect was the interaction between the diet and inflammatory stimulant in the production of microsomal prostaglandin E synthase in the fat-1 animals. 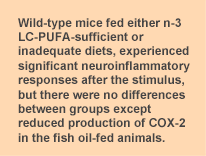 The investigators repeated these studies using only wild-type mice fed either fish oil or safflower oil diets from weaning. As in the previous comparison, there was no significant effect of diet, except in the reduced expression of cyclooxygenase-2 in the hippocampus of the fish-oil-fed mice in response to the lipopolysaccharide stimulant. Because there was no reduction in inflammatory response in the fish-oil-fed mice in spite of their increased hippocampal DHA, the investigators suggested that higher levels of unesterified DHA might be needed to reduce neuroinflammation, as was previously observed in the fat-1 mice. To test that hypothesis, the investigators administered lipopolysaccharide to mice fed adequate levels of n-3 PUFAs, followed by DHA or 17S-HpDHA (the precursor of resolvins and protectins) or the fatty acid vehicle infused into the brain over 24 hours via a surgically implanted catheter. Delivery of DHA to the hippocampus was verified by the delivery of 14C-DHA by catheter into 2 mice not involved in the experiment. The latter procedure showed that radioactivity was detected in the unesterified fatty acids, with low levels in the total phospholipids.

Infusion of DHA or 17S-HpDHA after the inflammatory stimulant resulted in a significant reduction in the neuroinflammatory marker IL-1β and the chemokine CCL3, but it did not affect IL-6, the chemokine CCL2, oxidative stress or the subunit of nuclear factor-κB. Infusion of DHA or 17S-HpDHA did not affect the enzymes of the arachidonic acid cascade, suggesting that downregulation of these enzymes is not required to dampen neuroinflammatory responses via DHA or its derivatives. It also showed the anti-inflammatory effects of unesterified DHA in the hippocampus. In the final set of experiments, the investigators measured the hippocampal concentrations of the DHA-derived SPMs neuroprotectin D1, resolvins D1, D2 and D5, and maresin 1 under basal conditions. They found detectable levels of neuroprotectin D1, resolvin D5, but not resolvins D1 and D2, and low levels of maresin1, along with17-HDHA, 14-HDHA (markers for their respective 17- and 14-HpDHA compounds). When the investigators injected the lipopolysaccharide followed immediately by a 24-hour infusion of DHA, 17S-HpDHA or the artificial cerebrospinal fluid vehicle, they observed significant increases in neuroprotectin D1 with 17S-HpDHA, but not with DHA alone. This study is the first demonstration that unesterified DHA, which is increased in the fat-1 mouse, reduces neuroinflammation in response to an inflammatory stimulant introduced directly to the brain. Evidence of this effect was the significant reduction in two inflammatory markers and the reduced gene expression of key arachidonic acid cascade enzymes in the hippocampi of these mice. A similar reduction in proinflammatory markers was observed in wild-type mice fed adequate n-3 LC-PUFAs and later exposed to the same protocol, including the direct infusion of DHA. However, even after a DHA infusion, the arachidonic acid cascade enzymes were not significantly reduced. 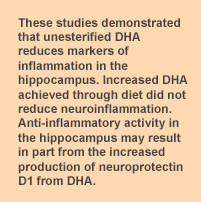 It is interesting to note that even when the animals were fed adequate levels of n-3 LC-PUFAs, they were not protected against the induced neuroinflammation. However, direct infusion of DHA had anti-inflammatory effects. This observation suggests that even if phospholipid concentrations of DHA are adequate or abundant, neuroprotection is achieved only when the pool of unesterified DHA increases. This implies that increased phospholipase A2 activity may be required. The protective anti-inflammatory effects of DHA may have been mediated, at least in part, through the increased production of neuroprotectin D1, which was significantly increased when the inflammation-stimulated brain was infused with its precursor 17S-HpDHA. Infusion of DHA alone increased the production of neuroprotectin D1, but not significantly so. The investigators also suggest that the down-regulation of nuclear factor-κB signaling might have contributed to the reduced neuroinflammatory markers.   Orr SK, Palumbo S, Bosetti F, Mount HT, Kang JX, Greenwood CE, Ma DW, Serhan CN, Bazinet RP. Unesterified docosahexaenoic acid is protective in neuroinflammation. J Neurochem 2013;127:378-393. [PubMed] Worth Noting Dalli J, Colas RA, Serhan CN. Novel n-3 immunoresolvents: structures and actions. Sci Rep 2013;3:1940. [PubMed] Open Access Dalli J, Zhu M, Vlasenko NA, Deng B, Haeggström JZ, Petasis NA, Serhan CN. The novel 13S,14S-epoxy-maresin is converted by human macrophages to maresin 1 (MaR1), inhibits leukotriene A4 hydrolase (LTA4H), and shifts macrophage phenotype. FASEB J 2013; 27:2573-2583. [PubMed] Palmer DJ, Sullivan T, Gold MS, Prescott SL, Heddle R, Gibson RA, Makrides M. Randomized controlled trial of fish oil supplementation in pregnancy on childhood allergies. Allergy 2013; Sep 21. doi:10.111/1ll.12233. [PubMed]