Posted by pufa | April 29, 2016
Prenatal & Infant Health
This article at a glance   Much of the DHA that a growing fetus needs for its development is derived from the maternal circulation and delivered by maternal-fetal transfer through the placenta. A notable increase in DHA levels in the maternal circulation occurs during pregnancy, and likely originates from the mobilization of DHA stored in maternal fat deposits and/or from increased DHA biosynthesis, supported by DHA obtained from dietary intake. Fetal DHA accretion during the third trimester increases markedly to support the rapid growth of the central nervous system. Sufficient availability of circulating fatty acids is thus considered to be of vital importance to satisfy the high fetal demands for this polyunsaturated fatty acid (PUFA). 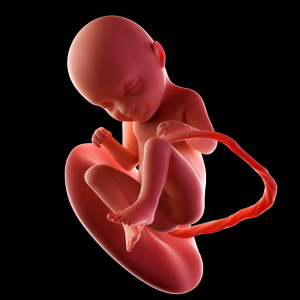 During the third trimester there is an augmented production of placental hormones that play important roles in directing energy reserves towards fetal growth. These increasingly counteract the actions of insulin, in particular placental growth hormone. In pregnant women that have insufficient capacity to produce more insulin, the ensuing insulin resistance is not overcome, leading to an inability to maintain normal blood glucose levels. This temporal condition of glucose intolerance corresponds to a disorder called gestational diabetes. Most frequently, gestational diabetes is transient and disappears after birth. Gestational diabetes is also considered a pre-diabetic condition, and mothers who displayed diabetes during pregnancy are routinely checked for diabetes some six weeks after giving birth. The prevalence of gestational diabetes varies considerably depending on the criteria used for screening and diagnosis, but all rely on diagnostic glucose thresholds. Diagnostic glucose thresholds are glucose limits that are surpassed in the diabetic condition after testing glucose levels upon taking an oral bolus intake of glucose. Current diagnostic criteria used by different national and international organizations are not harmonized. Using thresholds proposed by the International Association of Diabetes in Pregnancy Study Groups (IADPSG), some 18 percent of pregnant women in different centers globally are diagnosed with gestational diabetes. The prevalence of gestational diabetes also varies strongly among countries and populations (ranges from ~8% to 26% gestational diabetic pregnancies are described). Diabetes can have its onset during pregnancy, but may also be already present before pregnancy (pre-gestational diabetes). Along with the growing prevalence of type 2 diabetes and obesity, a significant increase in both pre-pregnancy overt diabetes as well as gestational diabetes prevalence has been noted in recent years.

Gestational diabetes can have significant effects on maternal and fetal health. A fetus in a diabetic mother will be exposed to higher concentrations of glucose, since glucose is transferred across the placenta by facilitated diffusion, and such fetuses are often born with excessive adiposity and birthweight (macrosomia, “large for gestational age”). Hyperglycemia in the fetus can also lead to polyuria leading to polyhydramnios (excess amniotic fluid), as well as cardiac and other malformations. A high birthweight during birth is likely to cause physical injuries to both mother and baby, resulting in an increased need for Cesarean section. After birth, there is a risk of hypoglycemia in newborns. Improved management of gestational diabetes is therefore of significant value to better infant and maternal healthcare. Recent studies have indicated that in addition to alterations in metabolic regulation, the materno-fetal transport of DHA is disturbed in women with gestational diabetes, even if treated with insulin. The relative abundance of DHA within lipids in placenta and cord blood is inversely related to fetal adiposity. Given that macrosomia may even occur in pregnancies with well-controlled gestational diabetes, guaranteeing sufficient fetal accretion of DHA may be very important for proper fetal development and neonatal outcome in all cases of gestational diabetes. Although reductions in the placental transport of DHA have been observed in gestational diabetes, it is not known whether the increased provision of DHA available for maternal-fetal transfer across the placenta may already be altered in gestational diabetes. In order to better understand how mobilization of maternal long-chain PUFA is regulated during the third trimester, Zhao and colleagues measured the changes in the circulating levels of DHA and a range of other fatty acids in healthy pregnant women and compared these with women with gestational diabetes. The research was carried out by researchers at the Department of Obstetrics and Gynecology, Sainte Justine Hospital Research Centre, University of Montreal, and colleagues at several other departments at University of Montreal, the University of Sherbrooke, Laval University, Canada, and the Shanghai Jiao-Tong University School of Medicine, China.

For this study, 140 women with singleton pregnancies were selected at 24 to 28 weeks of gestation. Women with pre-gestational diabetes were excluded. Of the selected women, 24 developed gestational diabetes (diagnosed according to the criteria of the American Diabetes Association using the 75-g 2-hour oral glucose tolerance test, with two of three glucose values exceeding the following cut-off – fasting: 5.3 mM, 1 h: 10 mM, and 2 h 8.6 mM). There were no significant differences between the two study groups with respect to race, age (average of 32 years old), pre-pregnancy BMI, and smoking and alcohol use characteristics. The newborns born in the two groups of women displayed no differences in average weight, but the average length of gestation was somewhat shorter (less than 1 week) and the birthweight z score was higher for babies born to women with gestational diabetes. Dietary intake was determined using a food-frequency questionnaire during weeks 24-28. No significant differences in macronutrient or fatty acid intake were noted between the two study groups. Fatty acid concentrations in the maternal circulation were measured in plasma total lipids by direct acid-catalyzed trans-methylation and gas chromatography (notably, a widely-employed derivatization method was used that had been developed 30 years earlier at this same institution). In women with an uncomplicated pregnancy, a range of fatty acids increased in concentration from week 24-28 to 32-35. These included several saturated and monounsaturated fatty acids, and among the PUFA, linoleic acid (LA), arachidonic acid (AA), alpha-linolenic acid (ALA), and DHA levels were increased (Table 1). No changes were observed in the levels of ɣ-linolenic acid, docosapentaenoic acid n-3 (DPA n-3), and eicosapentaenoic acid (EPA). Interestingly, plasma levels of several of the fatty acids that had increased during the third trimester in healthy pregnancies did not increase, or significantly less so, in the diabetic women. These were ALA, DHA, dihomo-ɣ-linolenic acid (20:3 n-6), docosatetraenoic acid (omega-6) and palmitoleic acid (see Table 1). Although not all observed increases were of a large magnitude, clear differences in fatty acid mobilization between women with a healthy pregnancy and those with gestational diabetes were observed. 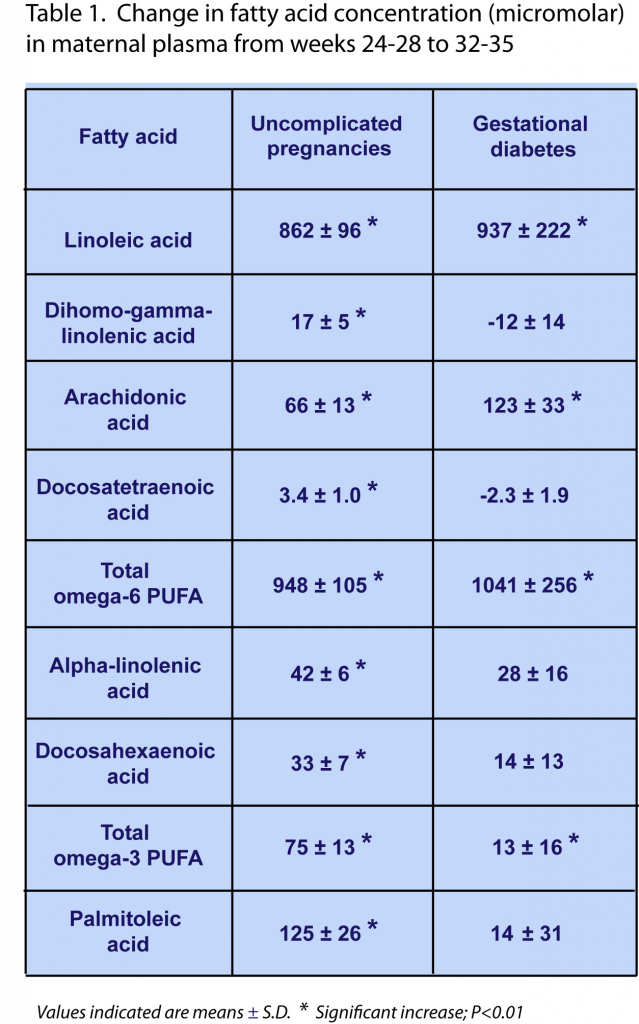 At study baseline (week 24-28), the average concentrations of all measured fatty acids were the same in both study groups, indicating that differences in measurable fatty acid mobilization occurred after week 24-28 of gestation. Only one exception was identified: the baseline concentration of the saturated fatty acid eicosanoic acid (20:0) was approximately 9% lower in diabetic women. Although similar increases in the plasma level of this fatty acid were observed in weeks 32-35 in both normal and diabetic pregnancies, its level remained -10% lower in diabetic women throughout the third trimester. During the third trimester the indexes of the Δ6-desaturase and stearoyl-CoA-desaturase enzyme activities (estimated from the ratios of fatty acid product to substrate abundance in plasma lipids) significantly decreased in gestational diabetes. The results of this study indicate that in women with gestational diabetes, a physiological increase in blood levels of several PUFA, notably ALA and DHA, during the third trimester of pregnancy, is disturbed. Although statistically significant, the relative and absolute changes are not very marked: the increases in ALA and DHA concentrations were 42 and 33 цM (respectively), whereas they were 28 and 14 цM (respectively) in women with gestational diabetes, on a background of baseline levels of ~160 and 390 цM, respectively. The results point to the possibility that lower amounts of specific fatty acids may be available for maternal-fetal transfer across the placenta in gestational diabetes. It remains to be demonstrated if the uncovered defect under conditions of diabetes is due to a reduction in the biosynthesis of specific lipids, insufficient mobilization from storage lipids, or enhanced metabolic degradation of these fatty acids. It remains to be addressed by means of a targeted analysis of lipid species whether the observed changes in these circulating fatty acids may correspond to a specific lipid type involved in maternal-fetal transport of LNA and DHA, e.g. esterified within lysophospholipids, which are a substrate for active transport by Mfsd2a, or as free fatty acids, by facilitated diffusion. The researchers point out that a controlled clinical study is needed to show whether pregnant women with gestational diabetes may potentially receive benefit from supplemental intake of essential fatty acids, in particular DHA.

A recent intervention trial had independently completed an assessment of the potential beneficial effects of supplemental omega-3 LCPUFA during the third trimester on maternal and neonatal health in gestational diabetes. In a double-blind randomized placebo-controlled clinical trial, Jamilian and colleagues addressed the effect of omega-3 supplementation on gestational diabetes outcome in a group of pregnant Iranian women. The study was carried out at the Department of Gynecology and Obstetrics at Arak University of Medical Sciences, Iran, together with colleagues from Kashan University of Medical Sciences, Iran, and the Department of Medicine at the University of Alberta, Edmonton, Canada. Fifty-six women diagnosed with gestational diabetes at week 24-28 of gestation were randomly assigned to one of two dietary supplements: a treatment group (n=27) that took daily 1 gram encapsulated fish oil containing 180 mg EPA/120 mg DHA, and a control group (n=27) that received an identically-appearing placebo (liquid paraffin). The intervention period was six weeks. Stratification based on BMI and weeks of gestation (less or more than 26 weeks) was used for randomization allocation. The women (18-40 years) all had a singleton pregnancy, did not take oral hypoglycaemic agents, and were diagnosed with gestational diabetes using the 2-h 75 g oral glucose tolerance test. Women with pre-gestational diabetes, chronic medical conditions, special dietary needs, or who required insulin therapy during intervention were excluded from this study. All women received folic acid and iron supplementation, received education on healthy eating habits, and were advised to maintain their normal routines. Compliance was promoted by cell phone text reminders, and was assessed by capsule counts. Dietary intakes and physical activity were monitored throughout the study. Daily nutrient intakes were calculated from three-day food diaries and calculated with dedicated software adapted for Iranian foods. The primary outcomes of the study were several indicators of maternal and infant health: polyhydramnios, pre-eclampsia, gestational age, Cesarean section, and newborn’s size, Apgar score, and hyperbilirubinemia. Secondary outcomes were levels of circulating markers of inflammation and oxidative status. At the beginning and end of the study, plasma and serum samples were collected, and body weight and height were determined from which BMI was calculated. Compliance was reported to be very high. No significant differences in a number of general characteristics (age, height, weight, change in weight, BMI and gestational age of the women) between the two groups were identified at baseline or at the end of the study period. No differences in mean dietary intake throughout the study of macronutrients, PUFA, and several micronutrients were identified. Women that had received supplementation with omega-3s did not develop polyhydramnios or need hospitalization, compared to 11% of the control group. In newborns from women who received the supplemental fish oil for six weeks, hyperbilirubinemia incidence and hospitalization rate was lower with 7.7%, compared to 33% of neonates for both outcomes in the control group. No differences were found for gestational age, newborn weight or ponderal index, and Apgar scores. Reductions in the need for Cesarean section, need for insulin-therapy, macrosomia, weight and length were not statistically significant. Analysis of plasma and serum markers of inflammation revealed that fish oil supplementation abrogated an increase in C-reactive protein that occurred during gestational diabetes. Omega-3 supplementation was also reported to reduce the levels of malondialdehyde in plasma, an indicator of thromboxane synthase activity as well as non-enzymatic lipid peroxidation.