Posted by pufa | April 29, 2015
Clinical Conditions
This article at a glance   Acne, or acne vulgaris, is a common skin disease in teenagers and young adults. It is most frequently found as scattered pimples in areas with a high density of sebaceous glands, such as the forehead and chin. In more serious forms of acne, papules and cysts can form, and they affect the skin in many parts of the body. Acne consists of visibly enlarged pilosebaceous units. The openings are filled with accumulated sebum, keratin protein and microbes, and are easily inflamed. Acne is perceived as visually distasteful, affects young people´s esteem, and can lead to scarring.

The mechanistic understanding of disturbed sebaceous gland function in acne has significantly improved in recent years. Various processes appear to be involved in the development and persistence of acne. Inflammation of the pilosebaceous unit appears to be a local tissue response to an overactive sebaceous gland activity (hyperseborrhea), characterized by overactive sebum formation, with occlusion of the pilosebaceous unit opening and further keratinization. Inflamed lesions are also colonized by specific Propionibacterium acnes and Peptostreptococcus bacterial species. A typical immune response to P. acnes also occurs in acne, with monocytes/macrophages involved in a predominantly TLR-2 mediated inflammatory response, as well as activation of a Th-17 type immune response. Reproductive hormones play an important role in sebaceous gland activity and the likelihood of developing acne, and are at least in part responsible for the variable level of acne incidence and severity among individuals at reproductive age. Effective treatments for acne vulgaris without side effects are an unmet need. A few studies have provided an indication that an inverse relationship between fish consumption and acne prevalence may exist. Several observational studies suggest that omega-3 LCPUFA supplementation can diminish acne, especially in moderate and severe acne. Omega-3 LCPUFA are involved in controlling the severity of other inflammatory skin diseases. A formal demonstration that omega-3 long-chain polyunsaturated fatty acid (omega-3 LCPUFA) dietary intake and acne incidence might be inversely related has not been made. Also, dedicated clinical studies to treat acne with omega-3 LCPUFA have not been carried out to date. A recent randomized and controlled trial has investigated the potential relative benefit of 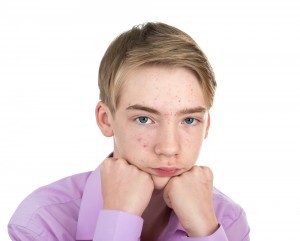 oral EPA/DHA treatment for acne vulgaris. The study was performed by Jung and colleagues from the Department of Dermatology, the Department of Food Service and Nutrition, and the Acne and Rosacea Laboratory, at Seoul National University College of Medicine and University Hospital, in collaboration with Oracle Dermatology Clinic, in Seoul, South Korea. The objective was to examine the effect of EPA/DHA intake as well as of gamma-linolenic acid (GLA) intake on existing facial acne in otherwise healthy volunteers. Forty-five volunteers with mild to moderate acne were randomly assigned to three study groups. The omega-3 group took two capsules containing in total 1 g EPA and 1 g DHA. The GLA group took two capsules containing in total 200 mg GLA (as part of 2 g borage oil). The control group received no supplement. The study lasted 10 weeks, and progress was monitored at 2, 5 and 10 weeks compared to baseline acne intensity. Study subjects, 36 men and nine women, were guided throughout the study by qualified nutritionists to maintain their regular diet. The mean age of the volunteers was 23.7 years. No differences were found between the groups with respect to energy intake, glycemic load and index or nutritional composition throughout the study. Acne was scored following the Leeds revised acne grading system that employs standardized digital imaging of skin lesions. Scoring of acne counts and severity was performed by independent dermatologists. Study subjects were asked to self-evaluate the severity of their acne. Punch biopsies of acne lesions were taken at baseline and at the study end to assess inflammation by histochemical analysis.

Comparison of acne scores during the course of the study revealed that after 10 weeks, statistically significant improvements in acne were reported in the omega-3 group compared to the control group. Inflammatory lesions were reduced by 43% when compared to baseline, non-inflammatory lesions by 20%, and the acne severity score by 21%. The observed effect size of EPA/DHA supplementation was remarkably similar to that of GLA. Whereas no statistically significant improvements in acne severity were induced by EPA/DHA supplementation at week 5, the self-assessed acne scoring revealed that the subjects already perceived a significant improvement at that time. Subjective assessment indicated a 23% reduction in acne at week 5, which progressed to a 40% improvement by week 10. Histological evaluation showed a marked reduction in inflammatory cell infiltration in acne lesions as a result of supplementation with EPA/DHA after 10 weeks, accompanied by a significant reduction in interleukin-8. Interleukin-8 is a cytokine involved in neutrophil recruitment and activation, and is produced by sebocytes in the context of acne and exposure to Propionibacterium acnes.