Should Infant Formula Provide Only DHA, or DHA along with Arachidonic Acid?

Posted by pufa | April 29, 2015
Prenatal & Infant Health, Guest Articles & Invited Opinions
Berthold Koletzko1, Susan E. Carlson2, Johannes B. van Goudoever3 1Ludwig-Maximilians-University of Munich, Dr. von Hauner Children’s Hospital, Univ. of Munich Medical Center, München, Germany 2Univ. of Kansas Medical Center, Kansas City, KS, USA 3Depts. of Paediatrics, Emma Children’s Hospital, Academic Medical Center, and VU University Medical Center, Amsterdam, The Netherlands   Infancy and early childhood are characterized by very rapid growth and tissue differentiation, which induce extremely high nutrient needs per kg bodyweight, while body stores are still very limited and thus the infant cannot compensate well for unbalanced nutrient supplies (1, 2). This is one reason why inadequate infant nutrition can have very marked and often immediate adverse effects on growth and health outcomes. In addition, infant nutrition during this period of developmental plasticity also induces strong long-term metabolic programming effects on health, physical and cognitive performance, and disease risk well into adulthood and old age (3, 4). Breastfeeding is the ideal way to nourish infants and generally supports normal growth and development, protects against infections, supports later cognitive development, and reduces the risk of later disorders such as obesity and diabetes (2, 5). Therefore, breastfeeding should be enthusiastically promoted, protected and supported. Infants who are not or not fully breastfed should receive an infant formula (or after introduction of complementary feeding alternatively a follow-on formula) with a composition following science-based recommendations (6). An infant formula serves “to satisfy, by itself, the nutritional requirements of infants during the first months of life up to the introduction of appropriate complementary feeding” (7). The compositional, quality and safety requirements for infant formula are high and more regulated than for any other food category for a variety of reasons. Unlike other foods, infant formula must provide all the required nutrients in adequate amounts from a single food product. The amount consumed of this single food is extremely high, in the order of 150-190 ml per kg body weight daily, which would be equivalent to the daily consumption of 10.5-13.3 L of milk in an adult weighing 70 kg. This large amount of one food is provided to a very sensitive consumer group in whom several absorptive, metabolic and excretory functions are still immature, while rapid cell, tissue and organ development occurs that is modulated by nutrition, with important long-term consequences. The compositional requirements of infant formula have been defined in great detail in several national and international food standards. In the European Union, the legislation on infant formula and follow-on formula adopted in 2006 (8) is currently being revised, with the goal to adopt a new regulation in 2015. In preparation of the new delegated act, the European Commission asked the European Food Safety Authority (EFSA) to provide scientific advice on the nutrient needs of infants and young children and on the adequate composition of infant and follow-on formula. EFSA reviewed a variety of aspects and nutrients, including also the long-chain polyunsaturated fatty acids (LC-PUFA) docosahexaenoic acid (22:6n-3, DHA) and arachidonic acid (20:4n-6, ARA). In a first report on nutrient requirements and dietary intakes of infants and young children published in 2013, adequate LCPUFA intakes were defined as 100 mg DHA/day and 140 mg ARA/day from birth to the age of six months, while 100 mg DHA/day were considered adequate from 6 to 24 months (9). These conclusions were also supported by recent recommendations of a global expert group, based on a systematic review of the available scientific evidence (10). In contrast, the subsequent report on the compositional requirements of infant and follow-on formula published in 2014 by EFSA advised that all infant and follow-on formula should contain relatively high amounts of DHA at 20-50 mg/100 kcal, but without the need to provide any ARA (11). At an assumed mean formula fat content of 5.2 g/100 kcal (»3.4 g/100 ml), this recommendation would lead to a DHA content of about 0.4 to 1% of fatty acids. This level is clearly higher than the about 0.2 to 0.3% DHA found in most LC-PUFA enriched formulae for term infants currently marketed around the world, which however generally contain also preformed ARA at levels equal to or higher than the DHA content. 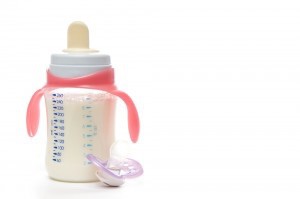 While the proposed obligatory inclusion of DHA in all infant and follow-on formulae will be welcomed by many scientists and health care professionals, considering the available data on beneficial effects (10), the wisdom of advising to provide infant formula from birth that supplies DHA but no ARA has been questioned (12). During pregnancy and infancy, both DHA and ARA are deposited in relatively large amounts in human tissues, including the brain (13, 14). Fetal accretion of both DHA and ARA during pregnancy is facilitated by their active and preferential materno-fetal placental transfer (15). Pregnant women’s red blood cell levels of both DHA and ARA were positively associated with their children’s intelligence quotient at school age (16). At birth, higher cord blood contents of both DHA and ARA predicted less later behavioral problems, emotional difficulties, hyperactivity and attention deficit at age 10 years (17). After birth, breastfed infants always get both preformed DHA and ARA (18). In a review of 65 studies on human milk composition worldwide the mean DHA content was found to be 0.32% (wt/wt; range 0.06-1.4%), while the mean content of ARA was higher at 0.47% (range 0.24-1.0%) (19). Since the 1980’s, DHA along with ARA has been added to infant formulae in an attempt to partly mimic the nutrient supply and functional effects achieved with breastfeeding (20-22). Current European (8) and global (7) standards on the compositional requirements for infant formula stipulate the optional addition of DHA to infant formula up to 0.5% of fatty acids (7) or the addition of total n-3 LC-PUFA up to 1% of fatty acids (8), provided that the ARA content is equal to or higher than the DHA content, thus following the model of typical human milk composition. Infant formula providing both DHA and ARA have been evaluated in numerous controlled trials in infants (10). In contrast, the use of term infant formula with up to 1% DHA and no ARA is a novel approach that has not been systematically tested for its effects, suitability and safety. ARA is an essential component of all cell membranes. The amount of ARA incorporated into the developing brain during infancy exceeds the deposition of DHA. Although humans can synthesize ARA to some extent from linoleic acid, infants fed formula without pre-formed ARA tend to develop lower ARA levels in blood plasma and erythrocytes than breast-fed infants who receive both DHA and ARA (13, 20, 23). Of importance, the ability to synthesize ARA from linoleic acid is strongly dependent on the FADS (fatty acid desaturases) genotype and reduced further in the about 25% of European infants who carry the less common FADS haplotypes (24). In their report, EFSA concluded that feeding infant formula with DHA and not ARA leads to lowered concentrations in red blood cells but not in brain, even though no data to support this conclusion are cited, and that no direct functional consequences in relation to growth or neurodevelopment would have been observed (11). These conclusions are surprising. The provision of high amounts of n-3 LC-PUFA without a concomitant supply of ARA has been associated with adverse effects on growth in premature infants (25, 26). In a double blind randomized trial in preterm infants, a formula with DHA and ARA led to higher weight gain than formulae without LC-PUFA or with DHA only (27). Further concerns regarding the effects of a high supply of DHA without increasing ARA intakes to infants are raised by the findings of a randomized controlled trial assigning term infants to formula providing either no LC-PUFA, or different levels of 0.32, 0.64 and 0.96% DHA at the same ARA level of 0.64% (28). The investigators performed developmental testing of the participating children up to the age of six years. Positive effects in tests on word production, a card sorting task and an intelligence test were observed with the lower DHA dose. However, performance of children assigned to the highest DHA dose of 0.96% but with a reduced ratio of dietary ARA to DHA was attenuated in the MBCDI Word Production Test and the Dimensional Change Card Sort Test at the highest DHA level, and it was attenuated at both the two higher DHA levels in the Peabody Picture Vocabulary Test (28). Thus in contrast to what one might have expected, an increase of formula DHA contents above 0.32% did not further improve or at least stabilize developmental outcomes, but actually had adverse effects, which might well be due to the reduced dietary ARA to DHA ratios provided with the higher DHA levels. Similar formulas with different DHA and ARA intakes were also fed to infant baboons, and various regions of the brains of these nonhuman primates were analyzed (35). The formula with about 1% DHA induced a trend to lower ARA levels in the retina and all the eight regions of the brain analyzed, with significantly reduced ARA values in the globus pallidus and the superior colliculus, even though the formula contained 0.64% ARA. These findings in human infants and in nonhuman primates question the suitability and safety of the approach recommended by EFSA, i.e. to provide infant formula from birth with up to 1% of fatty acids as DHA without a proportional increase in the intake of ARA. It is widely agreed that any major change in infant formula composition should be subjected to a full pre-clinical and clinical evaluation of nutritional adequacy and safety prior to introduction of such a modified formula into the market (29-34). Consequently, we consider it premature to accept the use of formula for infants from birth with the addition of 20-50 mg/100 kcal DHA without added ARA in the absence of accountable data on the suitability and safety from a thorough clinical evaluation of this novel approach (12).   Modified and revised from “Koletzko B, Carlson SE, van Goudoever JB. Should infant formula provide both omega-3 DHA and omega-6 arachidonic acid? Ann. Nutr. Metab. 2015;66:137-138” [PubMed]   Correspondence: Berthold Koletzko, MD PhD Dr. h.c. Professor of Paediatrics, Ludwig-Maximilians-University of Munich Head, Div. Metabolic and Nutritional Medicine, Dr. von Hauner Children’s Hospital, University of Munich Medical Centre, München, Germany office.koletzko@med.lmu.de   References: