Immunoglobulin ɛ (IgE) is the central antibody mediator of the allergic response. Allergic responses are a type of localized inflammatory response (also called a localized anaphylactic or immediate hypersensitivity reaction) that are operative in tissues directly exposed to the external environment, such as the skin, nose, eyes, airways, throat and intestinal tract. Allergic responses occur upon exposure to allergens, which are usually proteins from non-mammalian multicellular organisms such as insects, arachnids (mites and spiders) and plants (pollen). The well-known symptoms of allergy, itch and irritation, mucous secretion, changes in respiratory pattern, and enhanced blood flow, contribute to the physical and chemical removal of the offending agent (through scratching, removal by mucous transport and tear formation, coughing, swallowing, and proteolytic degradation). Allergies can also develop towards a diverse array of man-made organic and inorganic substances, components of food, and to physical stimuli such as elevated or low temperatures, light, and dry air, each of which may involve IgE to a variable extent. In chronic and exacerbated forms of allergy, such as eczema, rhinitis, and allergic asthma, reactions are considered pathological and have a significant disabling effect on life quality. Severe acute allergic responses that involve a generalized involvement of several organs are called systemic anaphylactic reactions, and can be life-threatening. Allergic reactions and diseases are very common, affecting at least 1 in 10 people. 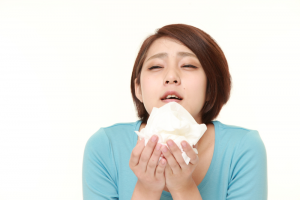 Why allergies develop in the first place is often unclear, but the extent of an allergic response to any specific allergen appears to be determined by the level of desensitization that may have occurred upon prior contact to low levels of allergenic exposure. Early life exposure (in utero or during childhood) informs the body about the presence of allergens as proxies for specific other organisms that are present in the natural habitat and food of the exposed person. Such early exposures are believed to trigger tolerance, i.e. a much reduced or absent immune response towards those allergens that an individual is and will normally be exposed to. Exposure later in life to an allergen that has never been previously encountered can rapidly lead to sensitization. Sensitization involves the development of B-lymphocytes producing IgE antibodies that can selectively bind to the specific allergen. IgE dimers stably bind to high-affinity IgE receptors on mast cells (present in all superficial tissues) and are activated upon interaction with allergen, triggering mast cell degranulation and the release of vasoactive and neuroactive mediators that bring about the symptoms of allergy.

People with allergies are characterized by increased levels of IgE in the circulation, pointing at a generalized increased IgE production. People with a genetic predisposition to produce IgE towards allergens, i.e. having atopy, will have a higher risk of developing allergic disorders, and can be affected already at early stages in infancy by atopic dermatitis, progressing to allergic rhinoconjunctivitis and asthma later in childhood. Reducing IgE levels in blood and tissues with monoclonal antibodies is an effective approach to reducing some forms of allergy. Widely used allergy medications attempt to make mast cells less sensitive to activation by allergen-IgE complexes, or interfere with the activity of the allergic mediators produced by mast cells (such as histamine or cysteinyl-leukotrienes).

Omega-3 LCPUFA play important roles in regulating immune responses. The formation and action of specific biologically active oxygenated derivatives of EPA and DHA contribute to the regulation of different aspects of the anti-inflammatory and inflammation resolution-promoting activity of EPA and DHA. Many aspects of the innate arm of the immune system have been identified to be modulated by EPA- and DHA-derived lipid mediators. More recently, specific elements of the adaptive immune system have also been documented to be under the influence of omega-3 LCPUFA-derived mediators, which include the regulation of dendritic cells, and the promotion of B-cell IgG and IgM formation. An EPA-derived lipid mediator, 17,18-epoxy-tetraenoic acid (17,18-EpETE), was identified recently and found to exert anti-allergic activity in a murine model of food allergy, acting at least in part through reducing mast cell activation. It is still unknown if IgE formation, as an important component of the adaptive immune system, may be regulated by omega-3 LCPUFA or by any of the bioactive omega-3 LCPUFA-derived lipid mediators.

In order to evaluate if IgE-mediated responses may be modulated by omega-3 LCPUFA, a recent investigation has screened several DHA-derived resolvins for their activity on IgE formation by human IgE-producing B-lymphocytes. The study was performed by Kim and colleagues from the Department of Microbiology and Immunology, at the University of Rochester, NY, USA, in collaboration with colleagues in the departments of Pulmonary and Critical Care, and Environmental Medicine, at the same university. First, B-cells were isolated from human blood, and experimental conditions were optimized to identify the conditions under which these cells switched to primarily produce IgE. B-cells can differentiate into antibody-secreting cells when stimulated by the CD40 ligand (a protein secreted by platelets when activated) and activation of a pattern recognition receptor (such as the toll-like receptors (TLRs), which are receptors that recognize conserved molecular domains of microbes and parasites). High and predominant IgE-secretion was achieved by exposing the cells to a mixture of a TLR-9 agonist, interleukin-4 and CD40 ligand.

17-Hydroxy-docosahexaenoic acid (17-HDHA) and resolvin D1 reduced IgE release in a concentration-dependent manner (reductions were observed at 10 and 100 nM, with test substances added to the cells every day for a period of six days). Under the experimental conditions tested, the inhibitory effect was specific for IgE, and no effect on IgM or IgG production was found. RvD2 and the RvD1 epimer AT-RvD1 did not reduce IgE production. The reduction in IgE production was related to a decrease in the number of IgE-producing B lymphocytes. This observation suggested that the inhibitory effect was not on actual IgE formation or secretion but at the level of differentiation of B-lymphocytes into cells that were able to produce IgE, i.e. a change in the immunoglobulin class-switching of precursor B-cells to IgE-producing B-cells.

For class-switching to occur to the IgE antibody isotype, the upregulation of a specific epsilon germline transcript (ɛGLT) is necessary, which is promoted by the T-helper cytokines IL-4 and IL-13, and the CD40 ligand. The researchers found that ɛGLT transcription was induced very rapidly after exposing the B-cells to the inducing conditions. RvD1 markedly reduced this transcriptional upregulation of ɛGLT, while not affecting the transcription of other factors that might be involved in the isotype switching process (activation-induced cytidine deaminase, CD23, and the receptor for IL-4).

Since ɛGLT is under the control of the transcription factor STAT6, the researchers next assessed whether RvD1 interfered with activation of STAT6 by assessing its phosphorylation and intracellular translocation into the nucleus (where it acts to regulate DNA transcription). B-cell stimulation induced a rapid phosphorylation of STAT6 and relocation to the nucleus, but both processes were not affected by RvD1. However, RvD1 pretreatment markedly reduced the binding of STAT6 to the promotor region of ɛGLT. The researchers evaluated the possibility that the transcriptional repressor Bcl-6 (B-Cell Lymphoma 6), known to counter-regulate STAT6 transcriptional activity, could be the point of regulation by RvD1. Although B-cell stimulation led to a small increase in Bcl-6 expression, this was not affected by RvD1. RvD1 did stimulate a marked increase in Bcl-6 protein levels, indicating that RvD1 activated translation of Bcl-6 messenger RNA to protein, or stabilized the transcribed Bcl-6 protein. In summary, the DHA-derived lipid mediator RvD1 reduces B-cell differentiation into IgE-producing cells by increasing the levels of the transcriptional repressor Bcl-6 that blocks STAT6-activated transcription of the ɛGLT transcript, necessary for immunoglobulin isotype switching.

Several observational studies have suggested that omega-3 LCPUFA intake and supplementation can lower the symptoms of allergic and asthmatic disease, but carefully controlled intervention studies are lacking and a mechanism of action had been unclear. In a recent double-blind crossover study in mild-moderate asthmatics, an increased dietary intake of EPA/DHA did not provide a beneficial effect on asthmatic symptoms towards a mannitol challenge (a direct activator of mast cells), even though several EPA- and DHA-derived lipid mediators were confirmed to be elevated in serum compared to control. The formation of DHA-derived (D-series) resolvins was not determined in the study, but observing no effect of increased omega-3 LCPUFA intake on the airway constriction triggered by direct mast cell activation and bypassing an IgE-mediated component, may suggest that omega-3 LCPUFA could exert a more pronounced modulatory action upstream of the mast cell response. Another study that has assessed the effect of omega-3 LCPUFA supplementation (900 mg daily from fish oil) during pregnancy on allergy incidence in infants found that eczema and sensitization to egg were reduced during the first year of life.

New studies aimed at addressing the beneficial role of essential fatty acids in allergic disorders now have a strong indication to focus on the role of RvD1 (as well as the pathway intermediate 17-HDHA) as a selective, or perhaps specific, endogenous DHA-derived lipid mediator that can influence IgE formation through inhibiting B-cell isotype switching. A novel approach to reduce IgE formation through the action of specific DHA-derivatives is of significant interest to better understand the role of DHA intake in the modulation and prevention of allergic disease, as well as the development of new anti-allergic compounds based on the RvD1 structure.

The results of this study provide insight into a mechanism whereby omega-3 LCPUFA may regulate inflammation, namely by activating the transcriptional repressor Bcl-6. Bcl-6 is known to counter-regulate and inhibit transcriptional programs activated by NF-kB, one of the central regulating systems involved in activating innate immune responses. Evaluation of the scope of the involvement of Bcl-6 in different immune cell types will likely provide a more profound understanding of the influence of omega-3 LCPUFA on various aspects of immune regulation and inflammation control.