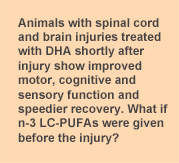 The importance of DHA in the recovery from spinal cord or traumatic brain injuries has been demonstrated in DHA-treated animals that exhibit dramatic improvements in motor function, greatly reduced neuronal loss, improved learning, less oxidative stress, and more rapid recovery. This work suggests that supplementation with DHA immediately after injury would improve cellular and functional recovery in humans as well. A recent case report describing the use of high-dose EPA and DHA (19.2 g n-3 LC-PUFAs/day) for more than a year in a patient with severe traumatic brain injury has done just that. The report described dramatic cognitive and physical improvements in the patient over the first 4 months post-injury, continuing for at least 2 years. This demonstration of the effectiveness of n-3 LC-PUFAs in the recovery from brain and spinal cord injury heralds a new and additional approach for treating such patients. One unanswered question is whether pretreatment with DHA or n-3 LC-PUFAs prior to spinal cord injury would improve the outcomes observed afterward. Johnny Figueroa and colleagues at Loma Linda University, U.S., addressed this issue in a study of laboratory rats that were fed either soybean or menhaden oil-rich diets for 8 weeks prior to surgical contusion (bruising) spinal cord injury. This is the most common type of spinal cord injury in humans and results in disability, inflammation and bleeding from nearby blood vessels. The severity of the injury determines the extent of functional damage and recovery. These investigators had previously reported that animals pretreated with DHA prior to spinal cord injury exhibited sparing of white matter, improved axonal preservation, less cell death and significantly better locomotor behavior. The underlying hypothesis for the current study is that pretreatment with DHA would enhance the balance between restorative and destructive signals in damaged neuronal tissue. As suggested recently, these signals could include lipids and neurofilaments, uncontrolled oxidative stress and apoptotic cell death. For example, increased neuronal membrane content of DHA might counteract the proinflammatory eff

ects of the release of arachidonic acid at the site of injury, leading to reduced inflammation and oxidative stress. The investigators fed animals diets containing either soybean or menhaden oil (6% of dry weight) for 8 weeks and then divided each group into injured or sham-operated, continuing the same diets after surgery for another 8 weeks. The menhaden oil diet provided 12.8 and 6.9 g of DHA and EPA, respectively, per 100 g of diet. Food intake data indicated that the animals consumed approximately 500 mg of DHA and 250 mg of EPA per kg of body weight. The spinal cord injury was performed at thoracic level 10. Animals were evaluated post-operatively for restoration of bladder control and motor function using open-field locomotion (BBB assessment), joint movement, paw placement and other assessments. The researchers performed sensory testing by measuring the withdrawal response of the hindpaws following a mechanical stimulus. At the end of the experi 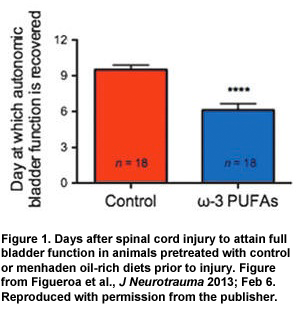 mental period, animals in both groups lost 8% to 10% body weight, but compared with baseline weight, significant weight loss occurred only in the control animals. Baseline weight was re-established after 3 weeks. Full recovery of bladder control was achieved significantly earlier in the n-3 LC-PUFA-fed animals compared with controls, 6.1 vs 9.5 days (P < 0.0001) post injury (Figure 1). Locomotor recovery was significantly faster in the n-3 LC-PUFA-red animals compared with the controls as observed in the BBB locomotor scale ratings, extensive joint movements and occasional weight-supported steps at 1 week post-injury. Compared with control animals, the fish oil-fed animals exhibited weight-supported plantar steps, consistent coordination and paw rotation during locomotion at 8 weeks after injury. Recovery in control animals reached a plateau at 4 weeks after injury, whereas in the fish oil-treated animals continued to improve through 8 weeks after surgery. Typically in spinal cord injuries of this type, animals experience sensory loss, which can be assessed by hindpaw withdrawal from a blunt mechanical probe applied with measured force. However, in the n-3 LC-PUFA-fed animals, only 23% showed sensory dysfunction, whereas 75% of the controls had sensory deficits. At 8 weeks after injury, control animals developed sensory thresholds approximately 66% greater than baseline (Figure 2), but the fish oil-fed animals had only a nonsignificant 9% change from baseline values, suggesting that fish oil pretreatment abolished sensory deficits. 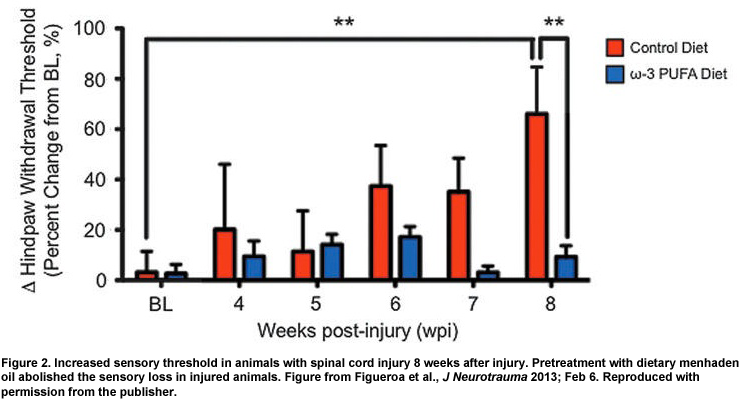 The investigators also performed fatty acid analysis on spinal cord tissue 8 weeks after injury and found that injured animals had significantly higher concentrations of n-6 docosapentaenoic acid (DPA) and significantly lower levels of DHA. The ratio of these 2 fatty acids, a marker of DHA deficiency, was significantly higher in injured compared with sham-operated controls in both the control and fish oil-fed animals (Figure 3). Although the ratio of n-6 DPA:DHA was similar in the sham-operated animals in both groups, it was significantly lower in the injured animals fed the fish oil diet compared with the controls, indicating that pretreatment with n-3 LC-PUFAs reduced the loss of DHA. 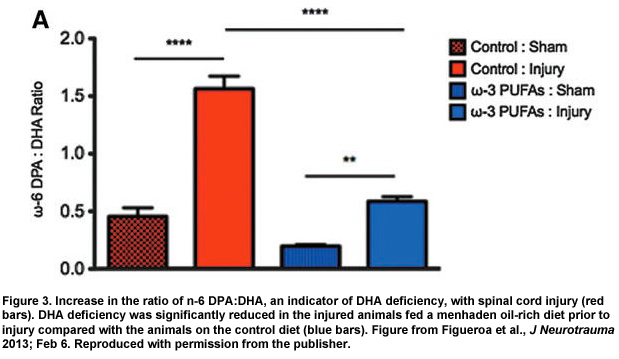 Differences in the DPA:DHA ratio were also associated with the recovery of autonomic bladder function and the locomotor scores. Increases in the DPA:DHA ratio were positively associated with the number of days to full bladder recovery in control animals, but negatively associated with locomotor scores. In addition, the DPA:DHA ratio was associated with the hindpaw sensitivity scores, increasing with a higher threshold of sensitivity. Animals fed the n-3 LC-PUFA diet were 54% less likely to develop major sensory dysfunction compared with controls (P = 0.02). These observations suggest that DHA loss in the injured spinal cord is associated with greater functional damage and delayed recovery. Others have shown that DHA is reduced in spinal cord injury and that increased DHA is associated with improved functional recovery. The investigators also examined the Akt and cyclic-AMP response element-binding protein (CREB) signaling pathways to determine whether they were responsive to the dietary treatments. Messenger RNA for CREB was significantly increased in the n-3 LC-PUFA-fed animals at 8 weeks post injury and protein expression for both molecules was also significantly increased. These molecules are thought to be involved in neural plasticity, neuroprotection and repair and may contribute to the improved neurological responses in the fish oil-fed group. This study contributes several important observations about the involvement of n-3 LC-PUFAs in contusion spinal cord injury and recovery from it. The study furnishes additional evidence that DHA-rich diets hasten and improve the autonomic, motor and sensory recovery from spinal cord injury. It shows that pretreatment with dietary n-3 LC-PUFAs reduces the damage from spinal cord injury and improves and hastens functional recovery, as shown in the full and rapid recovery of bladder function in the n-3 LC-PUFA-fed animals. The study is the first to show that pretreatment with high levels of n-3 LC-PUFAs followed by the same diet for another 8 weeks after spinal cord injury was sufficient to lead to marked improvement in autonomic and motor function. 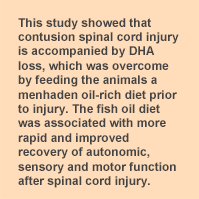 These findings support the observation that spinal cord injury is accompanied by a loss of tissue DHA and demonstrate that pretreatment with dietary n-3 LC-PUFAs mitigates this loss. As the authors suggest, the effectiveness of high-dose n-3 LC-PUFA pretreatment implies the importance of endogenous n-3 LC-PUFAs in easing the damage from neurotrauma. The study also provides additional evidence that the Akt and CREB signaling pathways are enhanced by dietary n-3 LC-PUFAs in such injuries and are likely involved in the recovery from the damage such injuries incur. This study and the rapidly expanding literature on this topic suggest that n-3 LC-PUFAs are intimately involved in the damage, mitigation of and recovery from the effects of traumatic brain and spinal cord injury. A recent report that n-3 PUFA deficiency since gestation increases the vulnerability of animals to traumatic brain injury further suggest that improving n-3 LC-PUFA status may improve one’s resistance to the damage from brain and spinal cord injury.   Figueroa JD, Cordero K,Illan MS, De Leon M. Dietary omega-3 polyunsaturated fatty acids improve the neurolipidome and restore the DHA status while promoting functional recovery after experimental spinal cord injury. J Neurotrauma 2013; Feb 6. [PubMed] Lewis M, Ghassemi P, Hibbeln J. Therapeutic use of omega-3 fatty acids in severe head trauma. Am J Emerg Med 2013;31:273.e5j-e8. [PubMed] Open Access