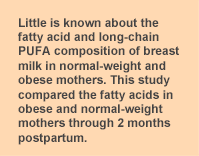 Factors associated with childhood obesity may relate to conditions in utero. For instance, maternal obesity in pregnancy and excess gestational weight gain have been associated with greater fat mass and percent body fat in the neonate. As suggested in the preceding article, a child’s greater fat mass may also be related to the mother’s plasma n-6 PUFA and linoleic acid concentrations in late pregnancy. Low birthweight has also been associated with a higher risk of central obesity in adulthood. On the other hand, breastfeeding has been associated with a lower risk of childhood overweight and obesity. The lower protein content of breast milk compared with infant formula may be one reason why breastfeeding is less conducive to childhood overweight. More recently, a greater exposure to n-6 PUFAs in the presence of relatively low amounts of n-3 PUFAs has been associated with increased adiposity and fat mass in animals and humans (see preceding article). Maternal dietary fatty acid patterns are reflected in the fatty acid composition of breast milk, which generally reflect the abundant consumption of n-6 PUFAs and low intakes of long-chain (LC) n-3 PUFAs. The abundance of n-6 PUFAs might not be a worry were it not for their links to obesity and their ability to reduce the incorporation of n-3 LC-PUFAs into tissues. In this report, investigators at the Karolinska Institute, Sweden, compared the fatty acid composition of the breast milk from normal-weight and obese nondiabetic mothers along with the plasma phospholipids of their infants. A subgroup of obese mothers participated in a weight control program during pregnancy. Mother-infant pairs were excluded for preterm delivery, multiple births and major infant malformations. Forty-one obese and 41 normal-weight mothers enrolled in the study, with another 29 obese women taking part in the weight control program. Participants were intended to reflect the general population of a medium-high socioeconomic area of Stockholm. The weight control intervention for women with a BMI >30kg/m2 included dietary advice and increased physical activity beginning at the first prenatal visit at 8 to 10 weeks’ gestation. The program continued until 6 to 8 weeks postpartum. In Sweden, all pregnant women are advised to eat fish 2 to 3 times a week. Infant blood samples were collected on the third day after birth. Breast milk samples were obtained after nursing at days 3 and 10, then 1 and 2 months after birth. Obese mothers were more likely to smoke, deliver by Cesarean section and eat less fish than control mothers. Infant birth characteristics and neonatal outcomes did not differ among the 3 groups. At 12 months of age, there were no differences in body weight, length and BMI among the infants. At 3 days postpartum, the phospholipid fatty acids in the infants’ plasma were higher in linoleic acid in the intervention group compared with the infants of the control or obese mothers. Total n-3 PUFAs and EPA were significantly lower in the infants of obese mothers compared with those of control or intervention mothers. 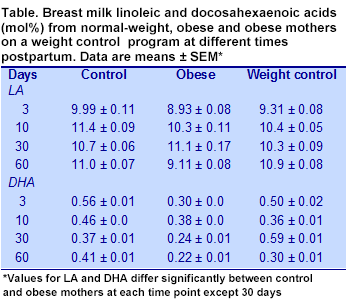 For breast milk PUFAs, the total n-6 PUFA content was highest in the control group at 3 days postpartum and increased significantly over the 2-month period only in the intervention mothers. Likewise, linoleic concentrations were significantly higher in the control than the obese mothers and increased significantly by 2 months only in the intervention mothers (Table). Arachidonic acid concentrations decreased over the study period in all groups. Total n-3 PUFA concentrations were highest in the control mothers’ breast milk and significantly lower in the obese mothers, remaining so over the 2-month period. DHA and EPA concentrations were highest in the control group, lowest in the obese mothers, and decreased in all groups over the study period. Breast milk fatty acid composition reflects the mother’s diet, especially her fish consumption, but can be affected by genetic factors, smoking, diabetes and preterm delivery. In this study, obesity was accompanied by a reduction in total n-6 and n-3 PUFAs, and lower linoleic acid and DHA concentrations in breast milk samples obtained at 3 days and 2 months postpartum. The study also reported that weight control intervention among obese women during pregnancy partially restored the PUFA patterns of breast milk toward those observed in normal-weight mothers. The only other study that compared the fatty acid composition of breast milk between normal, overweight and obese mothers reported a significant increase in total n-6 PUFAs and linoleic acid with increasing BMI. Patterns of n-3 PUFAs, including DHA, did not differ significantly among the three groups. However, the number of participants in each group was small, with only 9 observations for obese mothers. The study flags the association of obesity in pregnancy with a significantly lower concentration of n-3 PUFAs, especially EPA and DHA in the mothers’ breast milk. When intakes of n-3 LC-PUFAs are already low among women with Western dietary habits, the further apparent reduction in breast milk n-3 LC-PUFAs suggests that pregnant obese women might benefit from counseling to increase their fish and n-3 LC-PUFA consumption and for weight control.   Storck Lindholm ES, Strandvik B, Altman D, Möller A, Kilander CP. Different fatty acid pattern in breast milk of obese compared to normal-weight mothers. Prostaglandins Leukot Essent Fatty Acids 2013;88:211-217. [PubMed] Worth Noting Muhlhausler BS, Ailhaud GP. Omega-6 polyunsaturated fatty acids and the early origins of obesity. Curr Opin Endocrinol Diabetes Obes 2013;20:65-61. [PubMed]