n-3 LC-PUFA But Not Fish Intakes in Young Adults: Linked to Lower Risk of Asthma

Posted by pufa | April 01, 2013
Prenatal & Infant Health, Immune Function
The prevalence of asthma in the U.S. increased from 7.3 to 8.2% during 2001 to 2009, and now afflicts about 25 million persons, or one in 12. On a global basis, some 193 million adults suffer from asthma. The prevalence is highest in the Americas and among poor U.S. children at 13.5%. Only about one-third of U.S. individuals with asthma use long-term medications to control their condition, indicating substantial need for improved health care. A combination of environmental factors and genetics contributes to the condition. In susceptible individuals, allergens such as pollen, strenuous exercise, respiratory infections, cold air, air pollutants and other factors can be involved. Although various medications offer effective treatment, there are few ways to reduce the occurrence of asthma. Prenatal influ 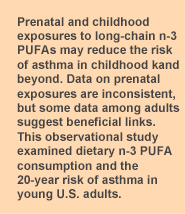 ences and epigenetics—heritable changes in gene expression caused by chemical modifications in a chromosome—have emerged as important contributors to the development of asthma and allergic diseases, especially in high-risk infants. The mother’s allergic and asthma status also has a strong influence on the development of allergic disease in the infant. Exposures during fetal and early infant life have become the center of studies on the development of asthma and other allergic diseases. The involvement of n-3 LC-PUFAs in the development of asthma receives considerable attention because of the anti-inflammatory effects of these PUFAs, their relatively low intakes during pregnancy and their ability to modify immune development during fetal life. Observational data suggest that children whose mothers ate more fruits, vegetables and oily fish weekly during pregnancy were significantly less likely to develop asthma at the age of 3 years. Studies in which pregnant women have consumed n-3 LC-PUFA supplements or DHA have produced inconsistent results. Some have reported a significant reduction in the occurrence of asthma, while others observed no effects. A recent systematic review reported that n-3 LC-PUFA supplementation in pregnancy was associated with a significant reduction in childhood asthma in 2 trials. A primary health care intervention in Norway to reduce childhood allergies reported that increased oily fish and n-3 LC-PUFA consumption along with a reduction in smoking during pregnancy and early childhood was associated with a significant reduction in asthma in the offspring at the age of 2. The reduction in asthma was particularly dramatic in girls. 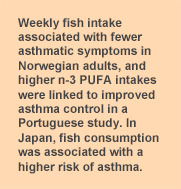 In adults, studies on fatty acids and asthma have been inconsistent. A prospective study among adult women reported no association with intakes of linoleic or n-3 PUFAs. Similarly, plasma n-3 PUFAs were not associated with the risk of asthma in young adults. An observational study of dietary patterns in 3 European countries reported that neither the intake of fish, fruits and vegetables, nor meats and potatoes, was associated with the risk of asthma in adults. In Japan, the consumption of fish 1 to 2 times per week was associated with a higher risk of asthma in children 6 to 15 years of age. In contrast, middle-aged adults with higher intakes of n-3 PUFAs and alpha-linolenic acid had improved asthma control, while a high ratio of n-6:n-3 PUFA was linked to a greater risk of uncontrolled asthma. In Norway, weekly fish intake among adults was associated with fewer asthmatic symptoms and those who never ate fish in childhood experienced a greater risk for asthma. Fish oil supplementation in exercise-induced bronchoconstriction in asthmatic athletes was associated with improved pulmonary function and less use of bronchodilator therapy. Investigators at the University of North Carolina, U.S., and other American institutions, examined data from the Coronary Artery Risk Development in Young Adults study to assess the relationship between the consumption of fish and n-3 LC-PUFAs and the 20-year incidence of asthma. Participants were African American and white men and women aged 18 to 30 recruited from 4 U.S. cities in 1985 to 1986. They were monitored until 2005 and provided dietary, medical and demographic information and blood samples. Participants were excluded if data were missing on n-3 LC-PUFA consumption, asthma, key factors such as smoking and alcohol consumption and if energy intakes were implausible or participants were pregnant. A total of 4,162 individuals were assessed. Asthma was identified by physician diagnosis or the use of asthma-control medicine at any follow-up exam. Long-term n-3 LC-PUFA consumption was determined using cumulative average intakes from 3 follow-up assessments over the course of the study. For analysis, participants were divided into quintiles by n-3 LC-PUFA intake, with consumption ranging from ≤ 0.050 g/day in the lowest group to ≥ 0.24 g/day in the highest quintile. Three hazard regression models were developed, each adjusting for additional confounding variables. Controlling for the most confounding variables, the investigators reported that the 20-year risk of incident asthma was significantly lower with increasing consumption of total n-3 LC-PUFAs, EPA and DHA, with the strongest effect (HR = 0.30, 95% CI, 0.22 to 0.41) observed for the highest quintile of DHA intake (Figure). Non-fried fish consumption was not associated with risk of asthma.