In chronic heart failure, a person’s heart is unable to pump sufficient blood to meet the body’s needs. As a result, the individual experiences shortness of breath, fatigue and swollen ankles, feet and legs. In 2008, about 5.7 million U.S. patients experienced heart failure, a leading cause of hospitalization. Approximately half those diagnosed with heart failure will die within 5 years. Yet, the heart failure hospitalization rate fell 29% between 1998 and 2008, mainly because fewer patients were hospitalized with the condition. One-year mortality rates also fell. In spite of some improvements, heart failure is a major burden on personal health and medical costs. Risk of heart failure is greater among those with previous heart disease, diabetes, high blood pressure, hypercholesterolemia, overweight and obesity, smoking and arrhythmias. Preventing or controlling these factors could substantially reduce the occurrence of heart failure. However, dietary strategies involving higher intakes of long-chain omega-3 PUFAs (n-3 LC-PUFAs) may improve the prognosis of patients with chronic heart failure. Older individuals without heart disease who have higher levels of circulating n-3 LC-PUFAs or EPA (but not DHA) were less likely to develop congestive heart failure, but others reported no relationship between fish consumption or the consumption of n-3 LC-PUFAs and the risk of heart failure. In contrast, n-3 LC-PUFA consumption was associated with a significantly lower risk of heart failure in Swedish men with no history of heart failure, myocardial infarction or diabetes. In a secondary prevention trial, treatment of patients with chronic heart failure with approximately 1 g/day of n-3 LC-PUFAs for a median of 3.9 years resulted in a small, but statistically significant reduction in mortality and cardiovascular hospital admissions. In this report, the GISSI-HF investigators enrolled 1,203 patients with chronic, stable heart failure in a multicenter study to evaluate the effects of usual and supplementary n-3 LC-PUFA consumption on biomarkers of inflammation, metabolism and cardiac stress in a 3-month trial. The supplement consisted of 850 to 882 mg of EPA + DHA, ratio 1.2:1. Control patients were given a placebo capsule. All patients received pharmacologic therapies for their medical condition. The investigators measured plasma n-3 LC-PUFA concentrations, adiponectin, C-reactive protein, pentraxin-3 (an acute phase response protein found in atherosclerotic lesions involving macrophages, neutrophils, dendritic cells or smooth muscle cells), n-terminal probrain natriuretic peptide (a biomarker for systolic/diastolic dysfunction and the risk of mortality) and high-sensitivity cardiac troponin T. Pentraxin-3 has been suggested as a biomarker for inflammatory cardiovascular disease. As expected, plasma phospholipid levels of n-3 LC-PUFAs were associated with the frequency of eating fish. Baseline EPA and DHA levels were more than twice as hig 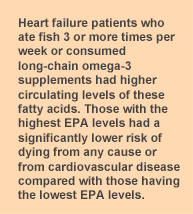 h in patients in the highest tertile of fish consumption (3 or more times per week) compared with those in the lowest third. Baseline EPA and DHA concentrations ranged from 0.55 mol% to 1.31 mol% and 2.22 mol% to 4.63 mol%, respectively, across the three tertiles of n-3 LC-PUFA consumption. After 3 months’ n-3 LC-PUFA supplementation all plasma n-3 LC-PUFA concentrations increased significantly, while n-6 PUFAs decreased by 5%. Supplementation also increased the concentration of EPA, DPA and total n-3 LC-PUFAs in plasma phospholipids, regardless of the amount of fish consumed. However, DHA increased in plasma phospholipids most in those who almost never ate fish and least in those who ate fish 3 or more times per week (P = 0.03). Baseline levels of circulating EPA, but not DHA, were inversely associated with all the biomarkers assessed. Supplementation with EPA and DHA for 3 months led to a further significant decrease in the concentration of pentraxin-3, which was associated with higher levels of EPA, but not with DHA. Supplementation was not associated with changes in any other biomarker. Circulating levels of EPA, but not DHA or total n-3 LC-PUFAs, were associated with a significantly lower risk of all-cause and cardiovascular mortality (Figure). These associations remained significant after adjustment for anthropometric, clinical, laboratory values and medications, but not after additional adjustment for circulating biomarkers. 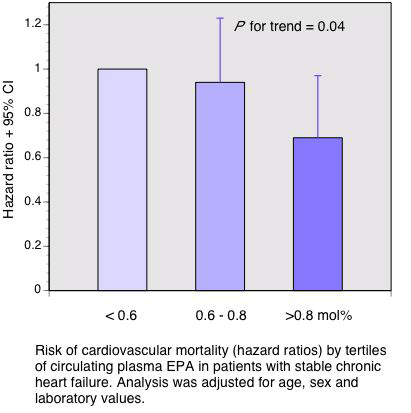 The key finding in this study is the association between higher circulating levels of EPA with a significantly lower risk of all-cause and cardiovascular mortality in patients with chronic heart failure. Mortality was not associated with circulating DHA concentrations. Regardless of fish consumption, even at levels of 3 times per week, circulating and phospholipid concentrations of n-3 LC-PUFAs were increased by supplementation with about 1 g per day of EPA + DHA in heart failure patients. In addition, higher levels of plasma EPA were associated with significantly lower concentrations of pentraxin-3, an inflammatory biomarker involved in the pathogenesis of atherosclerosis and ischemic heart disease. Although this marker is associated with the development of vascular inflammation and atherosclerosis, it has been suggested that its increase in atherosclerosis may be a protective response. Thus, decreases in pentraxin-3 levels with higher levels of EPA may be complicated to interpret. This study increases the evidence that EPA and DHA may affect cardiovascular disease through different mechanisms.   Masson S, Marchioli R, Mozaffarian D, Bernasconi R, Milani V, Dragani L, Tacconi M, Marfisi RM, Borgese L, Cirrincione V, Febo O, Nicolis E, Maggioni AP, Tognoni G, Tavazzi L, Latini R. Plasma n-3 polyunsaturated fatty acids in chronic heart failure in the GISSI-Heart Failure Trial: Relation with fish intake, circulating biomarkers, and mortality. Am Heart J 2013;165:208-215. [PubMed] Open Access