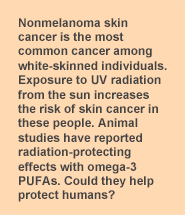 Exposure to the sun’s ultraviolet (UV) radiation is the primary cause of nonmelanoma skin cancers, the most common cancer among white-skinned individuals. Although the condition carries a very low mortality rate, morbidity and treatment costs can be high. The incidence of these cancers is increasing worldwide, with the highest rates found in Australia. In North America, the incidence increases with decreasing latitude, while skin type and sunbathing also affect the incidence significantly. In the U.S., the incidence of nonmelanoma skin cancer among Medicare patients—those aged 65 or more—increased nearly 77% over the 15 years from 1992 to 2006. There was an estimated 3.5 million of these cancers in the U.S. in 2006. Nutritional status, especially for vitamin D, has been associated with the risk of nonmelanoma skin cancer, but there is a trade-off. Exposure to sunlight increases the skin’s production of protective vitamin D3, but also increases the risk of nonmelanoma skin cancer. Deficiency in vitamin D3 has been associated with a higher risk of skin cancers and several other diseases. To ensure adequate production of vitamin D3, some experts recommend 5 to 10 minutes of sun exposure of the arms and legs or hands, arms and face, 2 or 3 times per week. Increased consumption of vitamin D, mainly from supplements and fortified foods, can ensure adequate levels of this vitamin. Otherwise, using broad-spectrum sunscreen with an SPF of 15 or higher and sun-blocking habits, such as UV-blocking sunglasses, long sleeved clothing and wide-brimmed hats, also protect against excessive UV exposure. 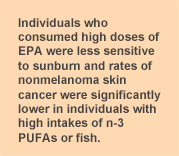 Chronic low-dose exposure to UV radiation suppresses immunity in the skin and internal organs. However, UV exposure is also associated with a reduced expression of allergic airway disease and some other types of cancer. Long-chain omega-3 PUFAs (n-3 LC-PUFAs) have been associated with protective immune responses in animals exposed to UV radiation for over 20 years. Animals fed an n-3 PUFA-enriched diet and exposed to UV radiation exhibited a marked reduction in inflammatory response and delayed hypersensitivity to dinitrocholorobenzene. It was later reported that EPA, but not DHA, protected against UVB-radiation-induced immunosuppression in mice, suggesting that EPA might have protective effects against UV radiation-induced skin cancer. Consistent with this hypothesis was a report that healthy individuals who consumed 4 g of purified EPA per day for 3 months experienced significantly reduced sensitivity to sunburn and a range of early genotoxic markers compared with individuals who consumed oleic acid. In 2000, an observational study reported that the risk of squamous cell carcinoma of the skin, one of the 2 main subtypes of nonmelanoma skin cancer, tended to be lower among those with higher intakes of n-3 PUFAs. A case-control study in Australia also observed a significant inverse relationship between the risk of skin cancer and high intakes of fish. Overall, studies in humans are few. In a new report, investigators at the University of Manchester and other universities in the U.K. examined the effects of n-3 LC-PUFA supplementation on UV radiation-induced immune responses in human volunteers. In a randomized controlled study, they evaluated whether supplementation with n-3 LC-PUFAs would reduce the immunosuppression induced by UV radiation. Participants included 79 healthy women between the ages of 18 to 60 years (median age, 44 years) whose skin sunburned easily with little or no tan and who were also allergic to nickel. Skin sensitivity to nickel can be used to assess cell-mediated immune responses because nickel acts as a recall antigen prompting an allergic response. Nickel sensitivity is relatively common, affecting about 15% of women. Participants were recruited from the dermatology unit at the Salford Hospital in Manchester and from general advertisements. 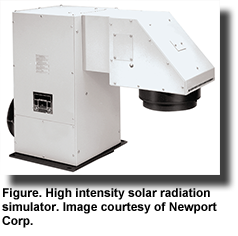 Eligible participants were assigned randomly to consume 5 capsules per day providing a total of 3.5 g of EPA and 500 mg of DHA or 5 g per day of short-chain saturated fatty acids for 12 weeks. Nickel allergy was confirmed prior to enrolment by patch tests that elicited an eczematous response after 24 hours. Participants were exposed to UV radiation from a solar simulator with a 1,000 watt xenon arc lamp from which UVC was filtered out (Figure). Radiation was applied to the mid-back at 3 separate 2.5-cm2 (1 sq inch) sites, each receiving 1.9, 3.8 or 7.6 J/cm2  simulated solar radiation for 3 consecutive days. The highest dose was equivalent to ~70% of the average threshold UV dose that elicited an erythematous response, i.e., a low dose. The nickel patch containing the predetermined dose needed to elicit a response for each participant was applied to each exposed site plus 3 additional unexposed sites adjacent to the irradiated sites on the mid-back. After 48 hours, investigators removed the nickel patch and 24 hours later measured the erythematous response using a reflectance instrument. The percentage of immunosuppression was calculated by subtracting the mean response of the exposed sites from the mean of the unexposed sites.

At the end of the study, 73 participants remained, of which 3 in the n-3 LC-PUFA group were excluded from the analysis because of poor compliance. Immunosuppression in response to the nickel patch increased in both groups as the dose of UV radiation increased. In the controls, the response increased from 15% suppression at a dose of 1.9 J/cm2 to 43% suppression with 7.6 J/cm2 (Table). Participants who consumed the EPA-rich n-3 LC-PUFAs experienced less immunosuppression compared with controls at each UV dose. Suppression by n-3 LC-PUFAs was approximately 50% of control values at the two lowest radiation exposures. There was no significant interaction between the UV dose and the treatment. Adjustment of the responses for hormone replacement therapy did not affect the results. The 2 lowest UV e

xposures where n-3 LC-PUFAs attenuated the immunosuppression were equivalent to about 8 and 15 minutes of midday summer sun exposure. However, at the equivalent of 30 minutes of midday sun, n-3 LC-PUFAs did not reduce the immunosuppression response to UV radiation. Especially in sun-sensitive individuals, n-3 LC-PUFAs might contribute to protection from the skin-damaging effects of short exposures to UV radiation. The key finding in this study supports results in animal studies and observational reports in humans that consumption of n-3 LC-PUFAs, especially EPA, reduces the immunosuppressive effects of low exposures to UV radiation. The study used large amounts of n-3 LC-PUFAs (~ 4 g per day) for 3 months in women who sunburn easily. Whether regular consumption of smaller amounts of n-3 LC-PUFAs or DHA alone would yield similar results is not known. The investigators used EPA-rich n-3 LC-PUFAs based on a report that EPA was more effective than DHA in reducing immunosuppression in mice. The possible effectiveness of DHA or EPA + DHA in humans merits further investigation. Finally, whether n-3 LC-PUFAs or purified EPA reduce UV radiation-induced immunosuppression in the general population of white-skinned people remains to be explored.   Pilkington SM, Massey KA, Bennett SP, Al-Aasswad NMI, Roshdy K, Gibbs NK, Friedmann PS, Nicolaou A, Rhodes LE. Randomized controlled trial of oral omega-3 PUFA in solar-simulated radiation-induced suppression of human cutaneous immune responses.  Am J Clin Nutr 2013;97:646-652. [PubMed] Open Access