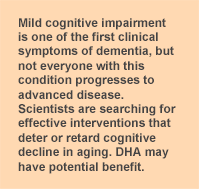 Many characteristics of Alzheimer’s disease are agreed, but the origins, cause, physiological processes and progression of this debilitating condition are not. For example, it has been suggested that mild cognitive impairment (MCI) is a transitional phase between normal cognitive changes in aging and the development of dementia. Some estimate that more than half the individuals with MCI advance to Alzheimer’s disease within 5 years. Others assert that most people with MCI will not progress to dementia even after 10 years. Tracking the processes involved in Alzheimer’s disease has become more elaborate and detailed since these studies appeared, so that current models suggest that abnormal amyloid biomarkers, such as cerebrospinal fluid amyloid beta42 appear first, followed by biomarkers of neurodegeneration, such as increased concentrations of the abnormal protein tau in cerebrospinal fluid, structural changes in brain as observed by magnetic resonance imaging and then clinical symptoms. Abnormal amyloid biomarkers may appear 5 to 10 years before a clinical diagnosis of dementia. Considerable effort has been expended to find effective interventions that deter or retard the progression of MCI to more advanced disease. In this regard, long-chain omega-3 PUFAs (n-3 LC-PUFAs) have been investigated because they may be low in individuals with MCI, hav 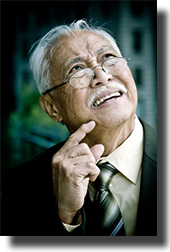 e been associated with a lower risk of developing MCI and supplementation with them has been associated with improved cognitive function in animals, though less frequently in human studies. DHA reduces the production of abnormal amyloid beta protein, which may delay or prevent the onset of Alzheimer’s disease and has many other neuroprotective functions. Considering that the consumption of n-3 LC-PUFAs is very low in Western countries and in some other parts of the world it is important to establish what, if any, contribution increased consumption of these fatty acids can make to the maintenance of cognitive function, especially in individuals with MCI. Recognizing that MCI in Asia is a growing challenge, Lai Kuan Lee and colleagues at the Universiti Kebangsaan, Malaysia, conducted a randomized clinical study in 36 individuals aged 60 years or more who were of low to middle socioeconomic status and without physical or mental illness. Participants were eligible if they met preset criteria as determined by professional neuropsychological assessments and were living in their own home, but not alone. Those taking vitamin, omega-3 PUFAs or ginkgo biloba supplements were ineligible. Participants were randomized to consume either fish oil or corn oil capsules for 12 months. The fish oil capsules provided 1.3 g of DHA and 450 mg of EPA per day. Outcome measures included neuropsychological tests, depressive symptoms and global cognitive function evaluation along with plasma fatty acids assessed at baseline, 6 and 12 months. The neuropsychological tests included Visual Reproduction tests I and II from the revised Wechsler Memory Scale, Rey Auditory Verbal Learning Test (RAVLT), Digit span backward and forward from the revised Wechsler Adult Intelligent Scale, executive function and attention by the Clock Drawing Test, psychomotor speed and visuospatial skills, also from the Wechsler Adult Intelligent Scale. Depressive symptoms were assessed using the Geriatric Depression Scale and global cognition from the Mini-Mental State Examination. A total of 35 participants completed the study. 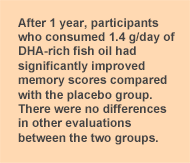 At baseline, those in the fish oil group were older (66 vs 64 yr) and had higher blood pressure (systolic and diastolic) than the control participants. The mean Mini-Mental State Examination score was 26.4, suggestive of MCI. At the end of 1 year, those who consumed the fish oil supplements had significantly improved cognitive scores for the digit span, visual reproduction and auditory verbal learning assessments compared with the control group. In other assessments, the fish oil participants showed significant improvements in memory and executive function/attention compared with baseline values, but only the improvements in memory showed a statistically significant difference between treatments, favoring the fish oil treatment (P = 0.001). The overall memory score was determined by averaging the 5 individual test scores related to memory function from the neuropsychological tests. Scores on the MMSE and depression rating scale did not differ between the two groups or with the duration of the study. The study demonstrated a beneficial effect of 12 months’ consumption of a DHA-rich fish oil supplement on overall memory in 65-year old adults with MCI. There were no significant group differences in executive function, psychomotor speed or visuospatial skills. These findings support the results of an earlier trial with algal DHA on immediate and delayed verbal recognition memory in healthy older adults with MCI. The authors suggest that the beneficial effects on memory observed here might be attributable to the very early stage of cognitive impairment in their participants, in contrast to the lack of effect in several other studies. As has been recently suggested, MCI may be an early clinical sign of future dementia, but for Alzheimer’s disease, biochemical markers of the disease may be present as early as 10 years before clinical symptoms appear. Thus, for many potential candidates, protection of cognitive function may have to begin years before the risk of dementia becomes clinically apparent. It would be most useful to have this study repeated in a larger study with more participants.   Lee LK, Shahar S, Chin AV, Yusoff NA. Docosahexaenoic acid-concentrated fish oil supplementation in subjects with mild cognitive impairment (MCI): a 12-month randomised, double-blind, placebo-controlled trial. Psychopharmacology (Berl) 2013;224:605-612. [PubMed] Worth Noting Stafford MR, Jackson H, Mayo-Wilson E, Morrison AP, Kendall T. Early interventions to prevent psychosis: systematic review and meta-analysis. BMJ 2013;346:f185. [PubMed] Open Access Carter JR, Schwartz CE, Yang H, Joyner MJ. Fish oil and neurovascular reactivity to mental stress in humans. Am J Physiol Regul Integr Comp Physiol 2013;304:R523-R530. [PubMed] Dacks PA, Shineman DW, Fillit HM. Current evidence for the clinical use of long-chain polyunsaturated N-3 Fatty acids to prevent age-related cognitive decline and Alzheimer's disease. J Nutr Health Aging 2013;17:240-251. [PubMed] Jack CR Jr, Knopman DS, Jagust WJ, Petersen RC, Weiner MW, Aisen PS, Shaw LM, Vemuri P, Wiste HJ, Weigand SD, Lesnick TG, Pankratz VS, Donohue MC, Trojanowski JQ. Tracking pathophysiological processes in Alzheimer's disease: an updated hypothetical model of dynamic biomarkers. Lancet Neurol 2013;12:207-216. [PubMed]