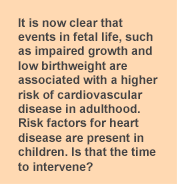 The presence in children of atherosclerosis and elevated risk factors for cardiovascular disease (CVD) has been well documented, with accelerated infant growth and childhood overweight and obesity among the contributing factors. Events in fetal life, such as impaired growth, as well as low birthweight have been associated with a higher risk of CVD in adulthood and with childhood endothelial dysfunction and structural vascular changes. One clinical feature of early atherosclerosis in children is increased carotid intima-media thickness (cIMT). In a recent study, investigators reported that impaired fetal growth or low birthweight was inversely associated with cIMT, whereas infants supplemented with n-3 LC-PUFAs from 6 months of age until 5 years exhibited no association between cIMT and birth weight. cIMT is an established biomarker for predicting future cardiovascular events in some age groups. In a variation on studies designed to examine impaired fetal growth or low birthweight and subsequent CVD risk factors, Michael Skilton from the University of Sydney and colleagues at several Finnish universities examined the change in cIMIT over 6 years and the consumption and serum concentrations of total n-3 PUFAs and DHA in young adults who had experienced impaired fetal growth. Participants were selected from the Cardiovascular Risk in Young Finns Study, a population-based study of atherosclerosis risk factors from childhood to adulthood for whom birth weight and preterm delivery data were available. Dietary data were obtained 27 years after enrolment when the participants were 31 years of age. Measurements of cIMT and serum fatty acids were performed 21 and 27 years after enrolment providing a 6-year interval to observe changes in cIMT. Data were available for 1,573 participants. 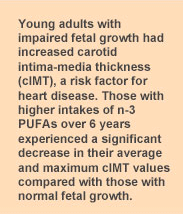 Impaired fetal growth was defined as those born at term with a birthweight below the 10th percentile for sex or born preterm with birthweight below the 25th percentile for gestational age and sex. There were 193 participants with impaired fetal growth. This group had significantly higher LDL cholesterol levels, triglycerides, high-sensitivity C-reactive protein and cIMT at the 21-year assessment.

In the analysis adjusted for the greatest number of confounding variables (dietary, CVD risk factors and medications), dietary consumption of total n-3 PUFAs was significantly and inversely associated with the 6-year progression in the mean and maximum cIMT in participants with impaired fetal growth (P = 0.01). Similarly, serum n-3 PUFAs and DHA were inversely associated with the 6-year change in the maximum cIMT. The study showed clearly that higher consumption of n-3 PUFAs, which leads to higher serum n-3 PUFA concentrations, was associated with a reduction in cIMT measurements in young adults. However, the association with serum n-3 PUFAs was not statistically significant when adjusted for CVD risk factors.

Participants with normal fetal growth showed no association between the 6-year change in maximum cIMT and dietary intakes or serum concentrations of n-3 PUFAs. On the other hand, serum DHA concentration was inversely associated with the 6-year increase in cIMT in those with normal fetal growth. Impaired fetal growth and low birthweight may be viewed as markers for increased CVD risk factors in childhood and greater risk of CVD later in life. Evidence for these risks is based on the associations between impaired fetal growth and early thickening of the arterial wall at the age of 8 years, elevated blood lipids, impaired flow-mediated dilatation and increased cIMT. Some of these risk factors can be mitigated by the increased consumption of n-3 PUFAs, as demonstrated in this study and another on early arterial wall thickening. There was no effect of total n-3 PUFA consumption in participants with normal fetal growth, but DHA intake was associated with lower cIMT. It is noted that in at least 2 studies in children or young adults, increased consumption of n-3 PUFAs was associated with a regression of carotid intima-media thickness, but in adults, only one study has reported a decrease in cIMT with the consumption of EPA and several have reported no effect of n-3 PUFA consumption. One might ask whether the increased cIMT in young adults is more plastic than in older adults, and thus more amenable to dietary intervention. It will take more data to answer this question. These reports suggest that childhood is not too soon to increase the consumption of these fatty acids to reduce the risk of CVD in adulthood. These observations also increase the imperative of preventing low birthweight deliveries.   Skilton MR, Mikkilä V, Würtz P, Ala-Korpela M, Sim KA, Soininen P, Kangas AJ, Viikari JS, Juonala M, Laitinen T, Lehtimäki T, Taittonen L, Kähönen M, Celermajer DS, Raitakari OT. Fetal growth, omega-3 (n-3) fatty acids, and progression of subclinical atherosclerosis: preventing fetal origins of disease? The Cardiovascular Risk in Young Finns Study. Am J Clin Nutr 2013;97:58-65. [PubMed]