Doubts About Linoleic Acid for Secondary Prevention of Heart Disease 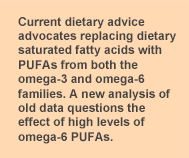 A tenet of the received wisdom about dietary practices to reduce the risk of cardiovascular disease and the chance of dying from it is the substitution of foods rich in saturated and trans fatty acids with those rich in monounsaturated fatty acids and PUFAs. A pooled analysis of 11 cohort studies concluded that replacing saturated fatty acids with PUFAs rather than monounsaturated fatty acid or carbohydrates prevents coronary heart disease over a wide range of intakes. Persuasive data from Finland, where following this recommendation was associated with an 80% decrease in cardiovascular mortality, added further support for this advice. The case might have been considered closed at this point were it not for lingering concerns about the possible undesirable effects of diets relatively high in n-6 PUFAs in conjunction with a low intake of n-3 PUFAs. It was thought that such diets might increase the production of pro-inflammatory eicosanoids, thus contributing to an underlying cause of cardiovascular disease. For this reason, some experts recommended reducing the consumption of n-6 PUFAs, while increasing the consumption of n-3 PUFAs. However, we now know that dietary linoleic acid has no effect on a variety of markers of inflammation in healthy individuals. In addition, the derivatives of arachidonic acid, a long-chain product of linoleic acid metabolism, have both pro- and anti-inflammatory properties. Others reported that diets high in linoleic acid, the predominant n-6 PUFA in the diet, reduced the concentration of EPA in plasma phospholipids, while low linoleic acid diets increased EPA in healthy men. High linoleic acid diets have also been negatively implicated in nonalcoholic fatty liver disease, endothelial dysfunction, cardiovascular disease and atherosclerosis, several chronic inflammatory conditions, Alzheimer’s disease and obesity. Recently, patients who consumed a reduced their dietary linoleic acid from 6.7% to 2.4% for 4 weeks e 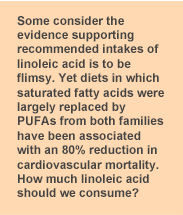 xhibited significantly lower levels of circulating oxidized metabolites of linoleic acid that have previously been associated with atherosclerosis, Alzheimer’s disease, nonalcoholic fatty liver disease and chronic pain. Dietary recommendations for n-6 PUFA consumption have come under renewed scrutiny. Stephen Cunnane suggested that the evidence for linoleic acid intakes was flimsy and that key information about linoleic acid metabolism is missing. Others reported that meta-analyses of randomized controlled trials yielded equivocal results depending on whether trials increased the intakes of n-6 and n-3 PUFAs or just n-6 PUFAs. Those employing higher n-6 PUFAs without increased intake of n-3 PUFAs resulted in a significant 13% higher risk of nonfatal myocardial infarction and coronary heart disease death. These findings suggested that flawed data in previous analyses were obscuring the different effects of n-6 and n-3 PUFAs on the risk of heart disease mortality. The American Heart Association robustly defended its recommendation to consume at least 5 to 10% of energy from n-6 PUFAs to reduce the risk for cardiovascular disease, further commenting that reducing current n-6 PUFA intakes from their current levels would be more likely to increase than decrease the risk of coronary heart disease. There is now a more extensive analysis of the original data from the Sydney Diet Heart Study, a controlled intervention trial conducted from 1966 to 1973, in which 458 middle-aged men who had experienced a myocardial infarction, acute coronary insufficiency or angina were randomized to consume safflower oil and safflower margarine or received no specific dietary guidance beginning 8 weeks or more after their coronary event. The objective of the intervention was to replace dietary saturated fats and cholesterol with safflower oil, up to the level of 15% total energy. Safflower oil contains 75% linoleic acid and no other PUFAs. This protocol resulted in the increased consumption of linoleic acid without additional n-3 PUFAs. The study was single-blinded, as the dietitians involved administered the safflower oil to the intervention group and no placebo was used. Median follow-up time was 39 months. 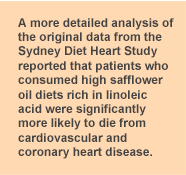 At the final follow-up, participants in the safflower oil group experienced a significantly higher risk of cardiovascular or coronary heart disease mortality, 70% and 74%, respectively compared with the control patients (Figure). The risk of dying from any cause (62%) was also higher in the intervention participants (P = 0.051). This was likely due to the relatively small number of participants and deaths. The investigators reported that the intervention group achieved a PUFA consumption of 15.4% of energy. The control group also increased its PUFA consumption from 6.2% at baseline to 8.4% energy at follow-up. Saturated fat intake fell in both groups. The changes in PUFA and saturated fat intakes in the control group were not significantly associated with the risk of death. Alcohol consumption and smoking modified the risk of death in the whole sample, but not in the intervention group alone. 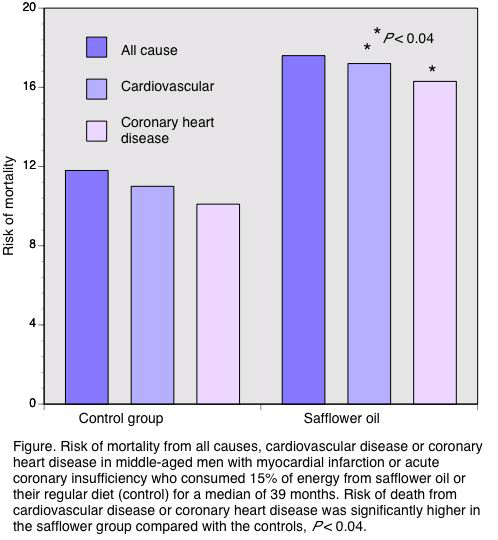 The Sydney Diet Heart Study is important, not only for its findings and the new rigorous analysis, but because it is one of only three randomized controlled trials that have looked at the effect on heart disease mortality of selectively increasing the consumption of linoleic acid without increasing the intake of n-3 PUFAs. The increased risks of cardiovascular and coronary heart disease mortality with a high intake of linoleic acid are consistent with the two previous trials. With the original data, these investigators were able to separate cardiovascular and coronary heart disease deaths from total mortality, making the results more specific. The re-analysis of the Sydney Diet Heart Study has its own problems. The original study authors noted that the results could not be interpreted because the intervention turned out to be multifactorial. Many participants in both groups adopted more healthy lifestyles, such as smoking less—the percentage of nonsmokers increased from 30% at infarction to 62% at entry into the study. Participants in both groups consumed more polyunsaturated-rich margarines and less saturated fat and cholesterol at follow-up compared with entry to the study. This change reduced the differences in dietary fat intakes between the groups. Other changes included weight loss (4.7 kg in both groups since infarction) and greater physical activity. In the original multivariate analysis, the investigators found that the most important contributor to a patient’s prognosis was the extent of coronary and myocardial disease at entry to the study. Recreational physical activity had a significant protective effect. The margarine provided to the safflower participants may have contained higher levels of trans fatty acids than originally thought and, if appreciable, would be expected to increase the risk of heart disease mortality. As data on the change in trans fatty acid consumption are lacking, it is possible that the revised findings may not be solely attributable to the effect of increased linoleic acid intake. Caution is also warranted because there were only 63 deaths from coronary or cerebrovascular disease in the whole study. For comparison, the corn oil study enrolled 80 patients with heart disease and randomized them to high-fat diets containing 80 g/day of olive oil or corn oil compared with a control group, which was not advised about dietary fat. Study groups were advised to avoid fried and fatty foods, fatty meats, ice cream and cheese and were restricted in milk, eggs and butter. Dietary assessments during the second year of the study suggested that the control group consumed approximately 70 g/day of fat and the olive oil and corn oil groups approximately 45 and 50 g/day, respectively. At completion, 75% of the control patients were free of major cardiac events compared with 52% of the corn oil group and 57% of the olive oil group. The difference among groups approached statistical significance, but the number of participants was very small. In the Minnesota Coronary Survey, over 9,000 institutionalized mental patients were served the usual hospital diet containing 42% energy from fat and 4.3% energy from PUFAs or a high PUFA diet containing about 20% energy from PUFAs and 45% energy from fat. The treatment diet was based on a combination of the National Diet-Heart Study diets B and C rich in vegetable oils. Over 4.5 years of study, there were no significant differences between the groups in those who survived without cardiac events. Deaths among men and women did not differ between the groups. For participants who remained in the study more than one year, deaths among the treated patients were greater than those on the control diet (31.0 vs 26.1 deaths per 1000 person-years). However, deaths from arteriosclerotic heart disease were greater among treated men than controls (18 vs 13), but did not differ for w 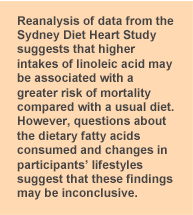 omen. The total number of deaths was small, so that statistical analysis was not reported. This study does not provide strong evidence one way or the other. A positive note in this report is that intervention studies in which the consumption of both n-6 and n-3 PUFA increased have been associated with significantly lower cardiovascular mortality and regression of coronary artery disease. This new analysis is unlikely to alter dietary recommendations to replace saturated (and trans) fatty acids with PUFAs from both PUFA families as supported in more recent studies. As Philip Calder observed in his editorial, “there is reason to be cautious about high intakes of omega-6 PUFAs.” Their effect in reducing tissue concentrations of n-3 PUFAs and associations with a host of chronic diseases suggest that we will hear more about this question.   Ramsden CE, Zamora D, Leelarthaepin B, Majchrzak-Hong SF, Faurot KR, Suchindran CM, Ringel A, Davis JM, Hibbeln JR. Use of dietary linoleic acid for secondary prevention of coronary heart disease and death: evaluation of recovered data from the Sydney Diet Heart Study and updated meta-analysis. BMJ 2013;346:e8707. [PubMed] Open Access Calder PC. Old study sheds new light on the fatty acids and cardiovascular health debate. [Editorial] BMJ 2013;346:f493. [PubMed] Open Access