Posted by pufa | August 28, 2015
Visual Function
This article at a glance   Introduction 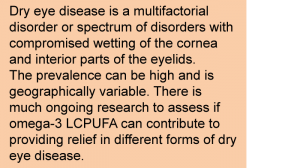 Dry eye, or keratoconjunctivitis sicca, is a quite common ailment affecting the cornea and conjunctiva of the eye. It is characterized by insufficient wetting and lubrication of the cornea and interior of the eyelid, made worse by accumulation of particulate material derived from sloughed cells and dirt. The definition of dry eye disease (or syndrome) is from multiple origins as distinct lipid and aqueous tear film layers covering the corneal and interior of the eyelid epithelial surfaces can become compromised. Aqueous deficient dry eye is caused by reduced lacrimal function, due to reduced production or alterations in tear fluid. Lipid-deficient dry eye disorder is caused by hyposecretion of meibum, a type of sebaceous lipid secretion that forms the lipidic film, due to loss of function and number of Meibomian glands. In addition, a reduced number or function of goblet cells can cause changes in tear fluid composition. Ocular surface 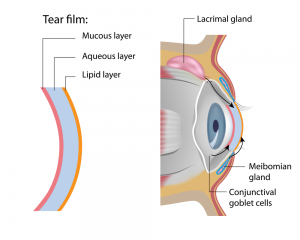 inflammation is an integral part of dry eye disease, and is accompanied with damage to the corneal epithelium and conjunctiva. Dry eye syndrome may be underdiagnosed as dry eye symptoms are not always discerned properly by patients, while inflammatory changes and deteriorated tear film stability and composition can already be measured. The prevalence of dry eye disease worldwide is surprisingly high (estimates range from a few percent of the population to ~35%), but also varies substantially geographically. Dry eye disease is a multifactorial disorder that advances with age, and leads to a significantly reduced quality of life. A relationship between the dietary intake of omega-3 LCPUFA and dry eye incidence has been identified, and several intervention studies have indicated that dry eye disease can be alleviated by increased dietary or supplemental intake of EPA/DHA. Three new recent studies have focused on assessing the potential effectiveness and practical applications of omega-3 LCPUFA in alleviating symptoms and discomfort in people with dry eye. Of interest, the three studies approach these applications from different angles. The first study addresses combining several therapeutic approaches that together significantly reduce discomfort, a second study shows that omega-3 LCPUFA supplementation improves comfort in wearing contact lenses in people with dry eye, and the third study shows that computer vision syndrome-related dry eye can be alleviated taking omega-3 LCPUFA. Symptom Relief in Lipid-Deficient Dry Eye Disease In the first study, Korb and colleagues in Boston, MA, with support from Alcon Research, Fort Worth, TX, addressed whether the combination of several physical and nutritional types of intervention that have hitherto been employed separately can provide better support to people with dry eye syndrome when used in combination. The study compared whether the combined use of lid wipes, eye drops, and an omega-3 supplement together is superior to the use of warm wet compresses alone. The study consisted of a single-center, open-label, investigator-masked, randomized study with adult patients that had diagnosed lipid-deficient dry eye disease. Twenty-six study subjects with less than seven functional Meibomian glands and with dry eye symptoms were randomized into two groups. The reference group applied warm compresses once-daily for eight minutes, during three months. The use of warm wet compresses is a common home-applied treatment that alleviates dry eye symptoms, but is variable in its effectiveness depending on a multitude of factors (duration, temperature, humidity, frequency). The treatment group self-applied eyelid hygiene with hypoallergenic lid cleansing wipes, followed by installation of a drop of lipid emulsion lubricant that was formulated to restore lipid, aqueous, and mucin components of the tear film, four times daily. These patients also took a daily supplement of two capsules containing 1 gram of omega-3 LCPUFA in the form of ethyl esters, comprising a daily dose of 528 mg EPA and 278 mg DHA. 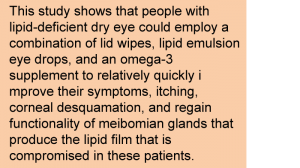 The primary end-point was Meibomian gland functionality, which has previously been demonstrated to correlate with symptoms of lipid-deficient dry eye disease, and can be related to the number of functioning glands. Meibomian gland functionality was tested by applying a controlled force that mimics deliberate blinking of the eye. Ocular and dry eye symptoms were assessed as secondary end-points using two validated questionnaires. The OSDI (Ocular Surface Disease Index) questionnaire assessed symptoms, and the contexts in which these may be exacerbated, over the preceding week. The SPEED (Standard Patient Evaluation of Eye Dryness) questionnaire records the frequency and severity of symptoms over the previous three months in a context-independent fashion. Additionally, eyelid status was measured according to several parameters, i) the presence and degree of collarettes (aggregates of keratin and dead epidermal cells at the edge of the eyelids and eyelashes) and debris present on the epidermis and eyelashes, ii) the degree of itching and eye rubbing, and iii) the percentage of partial Meibomian glands assessed by meibography by a single observer. Results Meibomian gland functionality significantly improved over the course of the combined treatment period, whereas no change was observed in those patients only using warm wet compresses. The number of functional Meibomian glands increased from approximately four functioning glands per eye at baseline, to approximately nine functioning glands after three months. After three months both the warm compress group and the combination treatment had improved SPEED scores, and OSDI scores progressively improved from month 1 onwards in both groups. However, no significant differences in these patient-reported improvements in symptoms were found between the two groups. With respect to itching eyes and eye rubbing, in both treatment groups marked improvements were reported during the course of the study. In the combination treatment group, after only one month a large proportion of patients were free of itching eyes, and eye rubbing improved progressively from one month onwards in both groups. The number of people that were free of collarettes and desquamated debris on eyelid epidermis and eyelashes increased progressively over the course of the treatment period, and much faster in the combined treatment group. Improved Meibomian gland functionality could not be assessed by meibography, which did not reveal significant changes in the number and morphology of Meibomian glands during the treatment period or between treatment groups. In summary this study provides useful guidance to people with lipid-deficient dry eye to employ a combination of lid wipes, lipid emulsion eye drops, and an omega-3 supplement to relatively quickly improve their symptoms, itching, corneal desquamation, and regain functionality of Meibomian glands that produce the lipid film that is compromised in these patients. The study does not explicitly demonstrate or attribute any specific activities to the presence of the omega-3 supplement in this combination approach, but suggests that it may possibly play a role in improved Meibomian gland activity and reduced corneal epithelial cell damage. A Controlled Trial on Dry Eye in Contact Lens Wearers A second recent study reports on the potential use of omega-3 LCPUFA supplementation for dry eye in people wearing contact lenses. The study was carried out by Bhargava and Kumar, from the Laser Eye Clinic, Noida, and the Department of Pathology, Santosh Medical College, Ghaziabad, India. The study involved 496 women, all contact lens wearers, which were allocated in a randomized fashion to two groups, a treatment group receiving an omega-3 LCPUFA supplement, and a control group receiving placebo (corn oil). The omega-3 group received two capsules of fish oil composed of 180 mg EPA and 120 mg DHA per 300 mg capsule twice daily, amounting to a daily dose of 720 mg EPA and 480 mg DHA. The study was carried out in a double blind fashion at multiple clinical centers for a period of six months. The study subjects were recruited from regional workplaces and medical schools from the Northern central part of India where baseline fish consumption is low, and people mostly tend to have a vegetarian diet.

The primary objective of the study was to determine a decrease in subjective symptoms of dry eye and lens wear discomfort at six months after intervention. Symptoms that were recorded included itching or burning, sandy or gritting sensation, redness, blurring of vision, ocular fatigue, and excessive blinking. A combined symptom score was calculated, reflecting mild, moderate, and severe dry eye. Lens wear comfort was assessed separately with patient-rated scoring on a 6-point scale ranging from no discomfort to severe discomfort. Secondary outcome measures were a change in tear production (measured with the Schirmer test), tear film stability (measured by tear film breakup time), and conjunctival epithelial cell morphology and goblet cell density were measured by conjunctival impression cytology of the inferior bulbar conjunctiva. Results The combined symptom score improved markedly from 7.9 at baseline to 3.3 after supplementation, reflecting a change of moderately severe (73%) and severe (5%) symptomatic persons, to no individuals with severe symptoms and 5.5% of individuals with moderately severe symptoms. After six months, a small improvement was also noted in the control group, but nearly 60% of individuals remained having moderately severe or severe symptoms. Statistically significant improvements were observed for all secondary outcomes in the contact lens wearers that received fish oil during six months, whereas no changes were noted in the control group. The number of goblet cells increased from 892 to 1051 cells/mm2 conjunctival surface area. The subjective rating of contact lens comfort also improved markedly in the omega-3 group, but did not change in the control group. Improving Dry Eye Symptoms in Computer Vision Syndrome The third study is also from Bhargava and colleagues, and focuses on dry eye symptoms that result from prolonged exposure to visual display terminals, i.e. computer screens. A relatively new development over the past two decades is the increasing time that people all over the world spend watching displays, mostly by working at personal computers, but also during leisure time. Computer vision syndrome encompasses several negative health aspects of prolonged visual display exposure, and is a growing occupational health challenge. Long and frequent exposure to displays has been shown to reduce the rate of eyelid blinking, and changes blink amplitude and the so-called blink quality. This can lead to reduced tear film quality, and a high percentage of people experience symptoms that correspond to dry eye. In addition, people who spend much time at screens frequently develop a number of other problems related to eye strain and irritation, headaches and postural problems. 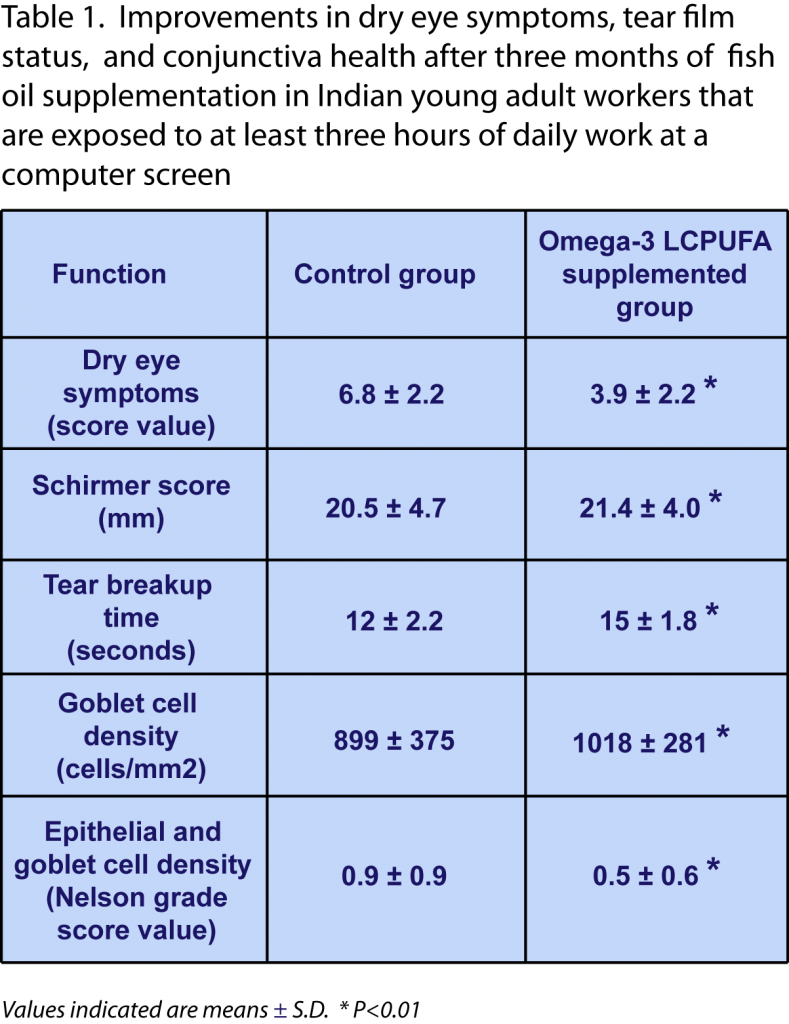 The study addressed whether omega-3 LCPUFA supplementation might have an effect on dry eye symptoms and objective measurements of tear film quality in computer vision syndrome. Thereto, 478 symptomatic computer users were recruited for a three month trial in which they were assigned at random to a placebo group and an omega-3 group. The study subjects had worked for at least a year with a computer for at least three hours a day. They were recruited from universities and technological institutes in the central-northern part of India. The average age was ~23 years. People in the omega-3 group received a daily dose of 720 mg EPA and 480 mg DHA (as fish oil taken as two capsules twice daily). The control group received encapsulated olive oil that was matched in appearance. Participants and investigators were masked to the intervention. Compliance was assessed from capsule counts at monthly eye center visits. The primary outcome was the symptomatic improvement in dry eye symptoms, and tear film quality and stability and conjunctiva impression cytology scoring were used as secondary outcomes. Results Baseline characteristics between the two groups were comparable, although the placebo group had lower symptoms and conjunctival impression cytology scores. The three month supplementation with EPA/DHA resulted in marked changes between the two groups (Table 1). The symptom score was markedly lower in the omega-3 group. The Schirmer and tear breakup time scores were significantly higher in the omega-3 group. The number of goblet cells had significantly increased after three months of fish oil supplementation. A scoring of epithelial morphology and goblet cell number (Nelson grading) showed a significant improvement of conjunctival health.