Posted by pufa | April 29, 2015
Clinical Conditions
This article at a glance   Male infertility has several causes including malfunctioning spermatozoa, too low spermatozoa concentrations in sperm, and physical impediments to the production of sperm or ejaculation. A common disorder underlying impaired spermatogenesis is varicocele. This condition involves an enlargement of the venous pampiniform plexus, a bed of veins that drains blood from the testis. The abnormal dilation results from increased hydrostatic pressure due to defects in venous valves or secondary to compression of the draining spermatic veins. It is believed that adverse conditions resulting from impaired venous outflow, such as increased blood pressure, hypoxia and increased local temperature, negatively affects spermatozoa development in varicocele. This leads to decreased sperm counts and reduced spermatozoa motility. Over time testicle volume also diminishes. Varicocele is often associated with painful swelling and with spermatozoid DNA damage, suggesting severe adverse conditions during sperm maturation.

A critical interpretation of the existing literature has led several specialists to indicate that an association between male infertility and varicocele exists, but that a causal relationship remains to be unequivocally demonstrated. Recent studies indicate that varicocele repair and removal does improve sperm development and can increase male fertility, suggesting that the impairment of testicular function by varicocele is reversible. Given the lack of a complete mechanistic understanding of how varicocele relates to male infertility, further studies are important, especially since varicocele is found in up to 15% of adolescents, and may explain 35% of male infertility prevalence. A second condition of significant relevance to male infertility is asthenozoospermia. Asthenozoospermia, roughly translated as “weak” or “soft” sperm, relates to sperm with inferior capacity to fertilize an egg mainly due to low spermatozoa motility. Reports on incremental decreases in semen quality since the 1930´s have given the impression that some environmental factors markedly and progressively affect male fertility. Critical inspections of the meta-analyses that have led to these conclusions has indicated that many factors are at play in determining semen quality, and that serious methodological inconsistencies between studies may invalidate the conclusions that a drastic rise in male infertility has occurred in the last century. Asthenozoospermia is a relevant problem though, and optimal sperm quality is certainly compromised in a very large proportion of men today. 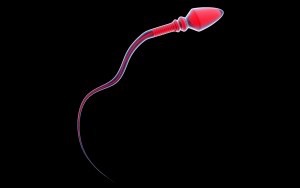 Spermatozoa from asthenozoospermic men have been reported to have structural defects in the energy-generating mid-piece, with deformed mitochondria and improper formation of the annulus that connects the mid-piece with the flagellum. Changes in the membrane composition of asthenozoospermic spermatozoa have also been identified. These comprise increases in specific mono-unsaturated fatty acids such as oleic acid, changes in the content of saturated fatty acids, such as stearic and palmitic acid, and decreases in omega-3 polyunsaturated fatty acids (omega-3 LCPUFA) and in the ratio of omega-3 to omega-6 PUFA. The omega-3 LCPUFA docosahexaenoic acid DHA has been identified to be lower in membranes of spermatozoa from asthenozoospermic men, suggesting that it contributes to good spermatozoal motility by providing the right biophysical properties of the spermatozoal membrane. The presence of trans-fatty acids in sperm and high intake of saturated fatty acids have also been associated with lower sperm counts. Since sustained higher intake of saturated fatty acids and trans-fatty acids, and decreased intakes of PUFA, are associated with an unhealthy diet, it is important to further assess if a relation between poor dietary habits and male infertility exists. A relationship between dietary intake of specific fatty acids and asthenozoospermia is suspected but has not been addressed. Two recent case-control studies now provide new indications that omega-3 LCPUFA have a significant influence over male fertility by reducing the incidence of asthenozoospermia and the outcome of varicocele. The first study, by Eslamian and colleagues from the National Nutrition and Food Technology Research Institute, the Shahid Beheshti University of Medical Sciences, and the Avicenna Research Institute, in Tehran, Iran, has investigated the relation between dietary intake of different fatty acids and asthenozoospermia. The second study by Tang and colleagues from the National Health and Family Planning Commission of China, in collaboration with various laboratories in China and the US, has studied PUFA content in spermatozoa from infertile men with varicocele.

The study by Eslamian and colleagues was undertaken to examine the relationship between dietary fatty acid intake and the incidence of asthenozoospermia, with concurrent assessment of a range of additional lifestyle and demographic variables. One hundred and seven men with asthenozoospermia and 235 normozoospermic control subjects were examined. Semen was collected from men aged between 20 and 40 years at a specialized infertility clinic. The asthenozoospermic men had been recently diagnosed. The motility of sperm was determined according to WHO guidelines, with asthenozoospermia defined as motility less than 40%, and progressive motility below 32%, within one hour of ejaculation. All asthenozoospermic men produced sperm with normal sperm counts (above 15 million per ml) and normal spermatozoa morphology (less than 4% abnormally shaped cells). Participants taking fatty acid supplements or suffering from any nutrition-related condition (cardiovascular diseases, diabetes, cancer, osteoporosis) or other disorders related to male infertility (endocrine hypogonadism, varicocele), were excluded from the study. Semen analysis was carried out on two samples per subject donated within a 1 month period. Assessment of dietary intake was made through a validated semi-quantitative food-frequency questionnaire and a food content table. Information on the dietary habits of the study participants one year prior to diagnosis of asthenozoospermia or study initiation (normozoospermia) was available for all participants. Intake of fatty acids was adjusted for total energy intake. Comparison of asthenozoospermic men with normozoospermic men indicated that among the recorded lifestyle and demographic variables, asthenozoospermia was associated with higher body mass index, smoking habits, and the presence of heavy traffic near home. The total motility of spermatozoa from asthenozoospermic men was 24.6% compared to 59.2% in normozoospermia. The consumption of a number of individual fatty acids differed significantly between both groups of men. In asthenozoospermic subjects the intake of total fatty acids, saturated fatty acids, trans-fatty acids, palmitic acid, and stearic acid was higher than in normozoospermic men. In contrast, the average intake of PUFA, omega-3 PUFA, EPA and DHA was significantly lower. No significant differences were identified for the intake of oleic acid, linoleic acid, total omega-6 PUFA, and alpha-linolenic acid (ALA). Study subjects with the highest tertile of intakes of omega-3 PUFA and DHA had the lowest probability to suffer asthenozoospermia (odds ratios of 0.68 and 0.53, respectively). In contrast, total trans-fatty acid intake and saturated fatty acid intake were associated with an increased risk for asthenozoospermia (odds ratios of 2.53 and 1.85 for the highest tertiles of intake). In the second case-control study, by Tang and colleagues, semen quality, spermatozoa membrane fatty acid composition, and oxidative damage to spermatozoal DNA were studied in three groups of men. The first group was composed of 92 infertile men with varicocele, the second group (n=99) were infertile but did not have varicocele, and the third group was composed of 95 fertile male volunteers without a prior report of infertility or varicocele. There were no differences in average age (35 years), body-mass index (not overweight), abstinence before donating sperm, or ejaculate volume. Infertile men, with or without varicocele, had significantly lower sperm counts, motility, vitality (percentage of living spermatozoa), and had a higher percentage of spermatozoa that were deformed. In men with varicocele the levels of ALA, EPA, DHA and total omega-3 were significantly lower than in control subjects. The levels of AA and linoleic acid were higher. The ratio of omega-6 to omega-3 fatty acids was twice that in control subjects. There was also a small but statistically significant increase in the level of 8-hydroxy-2-deoxyguanosine (8-OHdG) in the semen plasma. 8-hydroxy-2-deoxyguanosine is formed by free-radical-mediated oxidative damage to DNA, and is indicative of a severe depletion of endogenous antioxidants when a tissue is exposed to some major noxious event. In infertile men without varicocele, significant decreases in ALA, EPA and total omega-3 PUFA and an increase in the omega-6 to omega-3 ratio were also noted, although the changes were less than in men with varicocele, and no changes in 8-OHdG were detectable.