Posted by pufa | August 28, 2015
Clinical Conditions
This article at a glance   Renal failure is a final stage of chronic kidney disease (CKD), a disorder in which kidney structure and function progressively degenerate. Patients with advanced CKD depend on periodic hemodialysis or peritoneal fluid dialysis for survival. However, death due to end-stage renal disease is to a major extent the result of the downfall of the cardiovascular system. The development of maladaptive left ventricular hypertrophy, to overcome chronically increased vascular resistance, and arteriosclerosis both contribute to cardiac failure (heart failure). Mortality from cardiac failure in CKD is estimated to be up to 20 times higher than in the healthy population. Underlying the progressive renal tissue damage in CKD is a non-resolving inflammation of the kidneys accompanied by gradual tubulo-interstitial and glomerular fibrosis. The origins of sustained renal injury can lie with several factors such as diabetes, sustained elevated blood pressure, metabolic inflammation caused by poor dietary habits, infectious diseases, and immune-complex and auto-immune disorders, converging on perpetuating low-grade tissue inflammatory damage and progressive tissue fibrosis. C 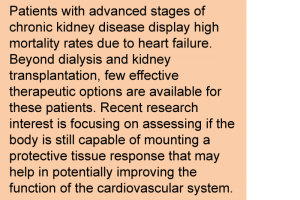 urrent treatment approaches in the early stages of CKD aim at halting further disease progression by reducing blood pressure, achieving lower blood sugar levels, and taking up a healthy lifestyle. However, effective treatments that reverse end-stage renal disease are not available. Theoretically, anti-inflammatory and anti-fibrotic approaches should be beneficial in halting the development of CKD and the secondary effects on the cardiovascular system. Anti-inflammatory activities of fish oil supplementation in CKD patients have recently been documented. A clinical trial that was carried out several years ago in nondiabetic patients with advanced kidney damage (CKD stage 3-4) assessed the effect of omega-3 LCPUFA supplementation on cardiovascular physiology. That study, carried out by researchers from the School of Medicine and Pharmacology, at the University of Western Australia, in Perth, Australia, showed significant improvement in blood pressure (ca. 3 mmHg decrease), heart rate (ca. 4 beats per minute decrease), and serum triglycerides (ca. 40% decrease), independent from any effects on renal function. The results suggested that possibly end-stage renal disease patients may find benefit from omega-3 LCPUFA, even if the underlying renal disease was not measurably improved. The tissue-protective, anti-inflammatory and inflammation resolving actions of omega-3 LCPUFA are attributed in part to their conversion to SPMs, Specialized Pro-resolving lipid Mediators that are enzymatically oxygenated derivatives of EPA, DHA, and other LCPUFA. The SPMs include resolvins, protectins and maresins, and they act at picomolar/low nanomolar concentrations at G protein-coupled membrane receptors to reprogram immune cells and bring about tissue responses that decrease inflammation. The formation of SPMs in humans as a result of augmented omega-3 LCPUFA substrate provision and in relation to endogenous omega-3 LCPUFA tissue levels is an increasingly active field of research. The formation of EPA- and DHA-derived lipid mediators that regulate vascular tone, tissue perfusion, and cellular excitability, are increasingly appreciated. Of relevance to advanced CKD, recognized anti-fibrotic actions of resolvins are of particular interest. Plasma Analysis Reveals Promising Changes 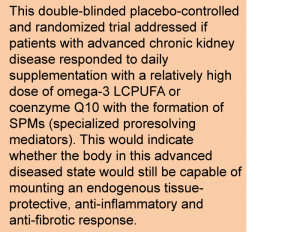 The analysis of plasma samples from the clinical trial in CKD patients mentioned above has now permitted a first evaluation of the formation of SPMs in response to omega-3 LCPFA supplementation in people with a well-characterized disease state. The study, published by Mas and colleagues of the same research group, tested the hypothesis that EPA- and DHA-derived SPMs might be detected in CKD patients after taking an omega-3 PUFA supplement. Eighty five patients with moderately to severely impaired kidney function (stage III and IV; glomerular filtration rate between 15 and 60 ml/min x 1.73 m2, and serum creatinine below 350 mM) were allocated in a double-blind randomized fashion to four groups. Patients with a diagnosis of cardiovascular disease were excluded. A control group received 4 g encapsulated olive oil daily, the omega-3 LCPUFA group received 4 g daily of n-3 PUFA ethyl ester oil (containing 460 mg EPA, 38 mg docosapentaenoic acid ω-3 (DPA), and 380 mg DHA per capsule; 4 capsules daily). A third group received coenzyme Q10 (CoQ), and a fourth group received the combination of omega-3 LCPUFA and CoQ. The duration of the intervention period was eight weeks, during which participants maintained their regular daily habits. The mean age of the volunteers was ~57 yrs (range 25-75 yrs) years. The groups were well matched with respect to age, body mass index, blood pressure, and a range of blood biochemical and renal variables and drug intake. The number of patients that completed the study in each group were 15, 20, 21 and 18 patients, respectively. The changes in the tissue levels of fatty acids and blood levels of SPMs were measured before and after the intervention period. The level of individual fatty acids was measured in the phospholipid fraction of platelets isolated from plasma, by gas chromatography. SPMs were extracted from plasma and the following analyzed by liquid chromatography-tandem mass spectrometry; resolvin D1 (RvD1), RvD2, 17R-RvD1, 10S,17S-di-hydroxy-docosahexaenoic acid (10S,17S-diHDHA), protectin D1, and the SPM precursors 17-hydroxy-DHA (17-HDHA) and 18-hydroxy-eicosapentaenoic acid (18-HEPE). Results Baseline levels of EPA, DHA, and arachidonic acid within platelet phospholipids were not different between the patients in the four groups. After eight weeks of supplementation, significant increases in the levels of EPA and DHA were found in the patients that had received the omega-3 LCPUFA supplement, and a decrease in arachidonic acid. There was no effect of CoQ on fatty acids within platelet phospholipids. Main effects analysis was used to determine the statistical significance, taking into account post-intervention values adjusted for baseline in individual patients. Alongside the increases in EPA and DHA, marked increases in the plasma levels of 18-HEPE and 17-HDHA, and small increases in RvD1 were found in patients that received the omega-3 LCPUFA supplement. No significant changes in plasma levels of 17R-RvD1 and RvD2 were noted. Protectin D1 and 10S,17S-diHDHA were undetectable in plasma. CoQ did not affect the SPM levels in plasma.

Discussion Of interest, the study showed a small but significant increase in the level of RVD1, a change that is not observed in healthy volunteers supplemented with omega-3 LCPUFA. In healthy volunteers, RvE1 is the only resolvin (thus far) that increases in response to a few days of omega-3 LCPUFA supplementation. This suggests that in a condition of advanced CKD, activation of the biosynthetic pathway for at least RvD1, involving both 15-lipoxygenase and 5-lipoxygenase, is operative when sufficient DHA is available. The marked increase in 18-HEPE levels in plasma, suggest that RvE1 may be increased (note, E-series resolvins were not measured in this intervention trial in CKD patients). It is currently unclear in which tissue the RvD1 that is detectable in plasma is being formed. The results might also reflect a selective down-regulation of the metabolic inactivation of RvD1, effectively permitting higher concentrations to build up. That this may occur is suggested by recent studies that indicate that the danger-associated molecular pattern protein HMGB1 (High-Mobility Group Box chromosomal protein 1), a small protein released during cellular damage, inhibits 15-hydroxyprostaglandin dehydrogenase and effectively increases the steady-state level of resolvins such as RvD1. The hypothesis of this study was that the concentration of circulating SPMs may be responsive to supplementation with omega-3 LCPUFA, a first step in demonstrating that such a protective response could potentially have a role in mediating a cardiovascular benefit in CKD patients. Resolvins have potent anti-inflammatory actions that may contribute to reducing cardiovascular pathologies such as atherosclerosis and tissue remodeling. To date SPMs have not been clearly shown to date to have direct effects on cardiovascular physiological parameters such as regulating blood pressure, cardiac output, or vascular compliance, but they do have potent modulatory roles on platelet reactivity that are likely beneficial in pathobiology of cardiovascular system. It will be of interest to determine if additional lipid mediators such as the EPA- and DHA-derived epoxides, for which the understanding of their effects on cardiovascular physiology are more developed, are formed under the conditions studied here. Progress 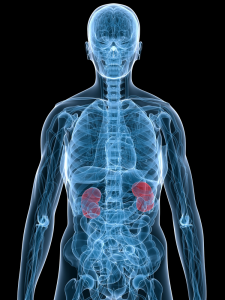