Posted by pufa | March 01, 2017
Clinical Conditions
This article at a glance   Type 2 diabetes is a metabolic disease in which people cannot adequately control blood glucose levels. Blood glucose values > 6.9 mM (fasting) and > 11 mM (post-prandial) are typical for the diabetic state. The disorder is largely preventable by a balanced diet and a healthy and active lifestyle. Dietary and lifestyle habits for a large proportion of citizens today are unhealthy, and the prevalence of type 2 diabetes has increased steadily in the past few decades, affecting hundreds of millions of people worldwide. Type 2 diabetes is characterized primarily by a deranged glucose homeostasis that stems from a loss in the ability of insulin-dependent tissues to adequately respond to insulin (insulin resistance). Alterations in insulin signaling involved in facilitated glucose transport across membranes, and a reduced vasodilatory and increased vasoconstrictor response to insulin in type 2 diabetics, lead to a reduced ability of metabolically active tissues to extract glucose from blood. In addition, a reduced thermogenic response to insulin promotes weight gain and the ectopic deposition of fat in pancreas, liver and muscle, further deteriorating insulin sensitivity and supporting the

development of a reduced ability to secrete insulin. Chronic resting hyperglycemia and increased post-prandial hyperglycemic responses that ensue from inadequate blood sugar control lead to vascular damage over time. Retinopathy, kidney failure, neuropathy, and poor wound healing responses are characteristic sequelae of the microvascular complications in type 2 diabetics. Macrovascular complications include coronary artery disease, cerebrovascular disease and peripheral artery disease. A majority of type 2 diabetics is obese, but the disorder can also appear during normal aging. In addition to improved focus on prevention as a key factor limiting the increase in type 2 diabetes prevalence, the identification of affordable approaches to reduce the increased risk of microvascular complications in current diabetics is also important. Lifestyle and nutritional changes, including increased intermittent physical activity and intake of foods with a lower glycemic index and load, are beneficial in order to recover normal levels of insulin sensitivity, blood glucose, and body weight. It is less clear though if the vascular injury and increased mortality from cardiovascular causes in type 2 diabetics are modifiable by achieving normoglycemia and a more active lifestyle alone. Aggressive control of glycaemia, blood pressure and LDL-cholesterol that achieve a very marked (>10%) decrease in body weight and a near-normal glycated hemoglobin level is associated with a reduced risk of death from cardiovascular causes and infarction. Hyperglycemia in diabetes imparts a long-term increased risk of microvascular complications and cardiovascular disease, a process termed “glycemic memory,” which is likely mediated by epigenetic changes. Demonstrated proof of efficacy of all the modifiable factors that may improve the short and long-term health of the large global population of type 2 diabetics is therefore of interest. Adequate omega-3 long-chain polyunsaturated fatty acids (omega-3 LCPUFA) intake and tissue levels can reduce some of the risk factors associated with cardiometabolic disease, including vascular patency and blood pressure, immune cell activation in vascular inflammation, and hypertriglyceridemia. Of particular interest to type 2 diabetes is the ability of omega-3 LCUFA intake to reduce VLDL-associated hypertriglyceridemia, which may help reduce ectopic fat accumulation in the pancreas and liver, and may contribute to diabetes reversal in patients submitted to a low calorie intake regime. Although the modulatory effects of omega-3 LCPUFA intake on lipid homeostasis and inflammation are relatively well recognized, their effects on glucose homeostasis are considered to be more complex and are still poorly understood. Adequate tissue levels of omega-3 LCPUFA may contribute to normal insulin resistance, as suggested by preclinical research and observational studies. However, intervention studies in humans that have addressed the effect of increased omega-3 LCPUFA intake on insulin resistance have provided mixed results. Large systematic reviews have not found convincing evidence for an effect of omega-3 LCPUFA intake on glycemic control in type 2 diabetics. To better understand the reasons for the varied effects of omega-3 LCPUFA intake and tissue status on glucose metabolism in type 2 diabetics, more detailed studies on the dysfunctional molecular responses in this disease and their potential modulation by omega-3 LCPUFA may provide new insight. Two recent studies have made such an assessment, and used samples from two double-blind randomized controlled trials. Both studies compared the effects of dietary supplementation with EPA/DHA-rich fish oil, flaxseed oil (rich in alpha-linolenic acid) and a vegetable oil that was low in omega-3 PUFA content (soybean oil and corn oil). 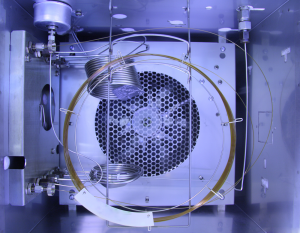 In the EPA/DHA-supplemented diabetic individuals, significant changes were measured in the levels of omega-3 PUFA: increased serum levels of the free fatty acid form of EPA, DHA and docosapentaenoic acid (ω-3), as well as EPA esterified to phosphatidylcholine (the most abundant phospholipid type). Much less expected, the only other metabolite with a significantly changed level (a four-fold increase) was 3-carboxy-4-methyl-5-propyl-2-furopropanoate (abbreviated CMPF; Figure 1). This substance is known as a metabolite of furan fatty acids (or F-acids), a specific class of fatty acids that contain a methylated furan moiety. Furan fatty acids are formed by microscopic organisms (microalgae and bacteria) and bio-accumulate in marine organisms such as fish, possibly in a similar fashion to the trophic transport observed with omega-3 LCPUFA. Levels of F-acids in food vary, but can be significant in fish tissues (~0.1-4 g/100 g), and levels of 0.1 g/100g have been reported in fish oil. The furan moiety confers free radical scavenging activity to this type of fatty acids, but any specific biological roles remain largely unknown. Upon fish consumption, furan fatty acids are absorbed into the circulation, then metabolized to CMPF and excreted via urine. Bacteria in the gastrointestinal tract of fish may generate furan fatty acids directly. 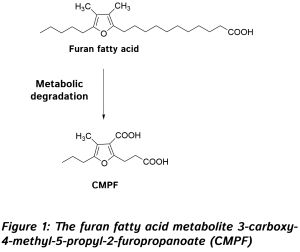 Increased CMPF levels (from a measurable background level) suggest that this reflects an increased intake of furan fatty acids from the fish oil supplement that was given, in line with a previous study that documented the absorption of this poorly documented group of dietary antioxidants. Linear correlations were found between the change in serum EPA or DHA and CMPF, and increased serum CMPF was associated with lower triglyceride levels. Further studies need to be carried out to elucidate the origin of CMPF in omega-3 LCPUFA-supplemented diabetic patients, to understand whether dietary furan fatty acids may induce any metabolic changes, and to contrast their effects with those ascribed to straight-chain fatty acids. This is of interest as the average CMPF level was furthermore reported to be higher in the healthy controls than in the diabetic subjects, suggesting that some level of furan fatty acids may be of benefit to metabolic health and/or that a decrease in furan fatty acid degradation to CMPF occurs in diabetic individuals. Interestingly, in both studies insulin resistance was not improved, and was even worsened, by omega-3 LCPUFA intake. It has been suggested that improvements in insulin sensitivity can be observed only at a high omega-3 index, and that the effect is easily missed in intervention studies if omega-3 levels are still inferior to those required to reach a sufficiently elevated omega-3 index. Glycated hemoglobin levels did decrease in both studies, suggesting that on a background of unchanged glucose levels, the glycation of hemoglobin may be diminished, reflecting a lower propensity of glycation reactions of glucose with proteins, a first step in the formation of AGEs that are involved in vascular damage in diabetes. The results point at the possibility that omega-3 LCPUFA intake may reduce oxidative events involved in vascular tissue damage in the diabetic state. Hyperglycemia-mediated cellular injury involves mitochondrial superoxide anion production, and the transformation of Amadori products into reactive AGEs involves an oxidation step. The results of the American intervention study also suggested that changes in amino acid metabolism do not mediate the triglyceride-lowering effects of fish oil intake, but rather may be associated with a decreased glycation.