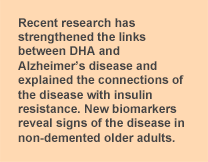 Alzheimer’s disease, a progressive and debilitating form of dementia, is most common among older adults. In the U.S., 1 in 8 people aged 65 and older or about 5.4 million of all ages have the condition. This number is predicted to treble to more than 13 million by 2050 because more people are living longer. Worldwide, the disease afflicts about 36 million people. Currently, there is no cure or effective treatment for the disease, although various medications are used to improve memory and several cognitive tasks. What determines a person’s chance of developing Alzheimer’s disease? In one report, more than half of individuals who exhibit mild cognitive impairment—defined as cognitive decline greater than expected for a person’s age and education level, but that does not interfere notably with activities of daily life—develop dementia within 5 years. Others have reported lower rates of conversion—a cumulative rate of 33.6%—based on a meta-analysis of 41 cohort studies. Besides cognitive decline, depressive symptoms and insulin resistance or type 2 diabetes have strong links to increased risk of vascular cognitive impairment or Alzheimer’s disease, but these links are complicated. Gene mutations contribute substantially to the risk of the disease, with variations in the presence of the ε4 allele of the apolipoprotein E (APOE) gene accounting for half and possibly up to 95% of the risk in the U.S. Some risk-raising gene mutations occur in the amyloid precursor protein gene (APP), presenilin-1 and presenilin-2 genes and others. Risk of Alzheimer’s disease is also greater with high cerebrospinal fluid tau and Abeta42 (Aβ) peptides, age above 65 years, family history of the disease, elevated homocysteine concentrations and other health conditions such as type 2 diabetes. DHA concentration in certain brain regions has been associated with Alzheimer’s disease. For example, Soderberg and colleagues reported that the hippocampus of Alzheimer’s disease brains had about half the concentration of DHA as control brains. However, not all studies have observed altered DHA levels in the brains of these patients. DHA has several protective functions in Alzheimer’s disease, including a reduction in the production of Aβ peptides that accumulate extracellularly in this disease, and improved neuronal survival via the DHA-derived docosanoid, neuroprotectin D1. However, amelioration of Alzheimer’s disease by increasing the consumption of DHA has been ineffective. It might be that interventions must occur prior to the onset of mild impairment. Even though it cannot halt its progression, DHA helps counteract Alzheimer’s disease pathology. A recent study in mouse cells and tissues described how DHA is involved in redirecting the processing of the amyloid precursor protein away from the production of dangerous Aβ peptides, toward less harmful non-amyloidogenic processing. 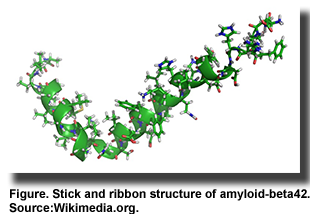 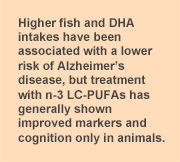 Although fish and DHA intakes have been linked to improved memory and cognition, several reviewers have concluded that the evidence supporting the benefits of B-vitamins and fatty acids for the prevention of dementia is too inconsistent for dietary recommendations. A study in healthy older adults with mild age-related cognitive decline reported that learning and memory function improved after 6-months of supplementation with 900 mg of DHA. A recent review concluded that n-3 LC-PUFAs might slow the rate of cognitive decline in older adults, but are without effect in the prevention or treatment of Alzheimer’s disease. In a study of n-3 LC-PUFA supplementation for 6 months in patients with Alzheimer’s disease, treatment was not associated with any changes in disease or inflammatory biomarkers or with Aβ42 concentrations in cerebrospinal fluid. In animal models, dietary DHA stimulated the non-amyloidogenic processing of the amyloid precursor protein in cellular models of Alzheimer’s disease, which resulted in lower levels of Aβ. Others have also reported an association of DHA with reduced accumulation of Aβ and tau, the abnormal intracellular peptide associated with the formation of neurofibrillary tangles. In contrast, arachidonic acid increased the production of detrimental Aβ peptides, while the combination of DHA with n-6 PUFAs diminished the effectiveness of DHA in reducing abnormal peptides. In humans, low levels of erythrocyte DHA have been associated with lower total brain volume and greater white matter hyperintensity volumes, in healthy, 67-year-old Framingham Study participants. Lower erythrocyte DHA and lower omega-3 index values were associated with lower scores on tests of visual memory, executive function and abstract thinking in the same study. With the measurement of Aβ peptides in plasma, we now have better biomarkers for the risk and development of Alzheimer’s disease.

A cross-sectional nutrition study from Nikos Scarmeas’ research group at Columbia University, USA, evaluated the possible associations between several nutrients and plasma Aβ peptides in older adults in New York City. Community-living participants were recruited and screened for health, neuropsychological function, presence of dementia and available dietary assessment. Those with any type of prevalent dementia were excluded. The final sample included 1,219 individuals with dietary intake and plasma Aβ measurements. Their average age was 75 years. In addition to dietary intakes of fatty acid classes, the investigators assessed the consumption of 6 vitamins, n-3 and n-6 PUFAs. Both Aβ40 and Aβ42 peptides were measured. Analyses were adjusted for age, education, energy intake, ethnicity, sex, APOE genotype and alcohol intake. 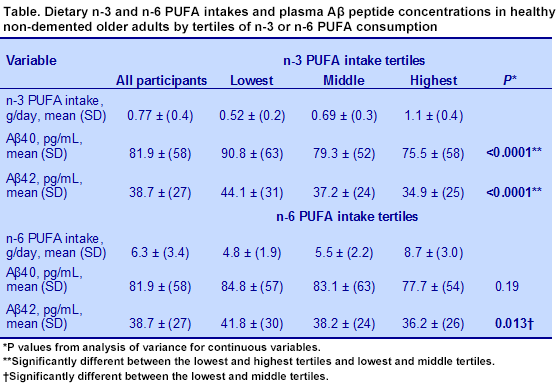 Results for the plasma concentrations of Aβ peptides are shown in the table. In unadjusted linear regression analysis, higher intakes of n-3 LC-PUFAs were associated with lower levels of Aβ40 and Aβ42 peptides, but in adjusted analysis, only the reduction in Aβ42 peptides was statistically significant. No other nutrients or fatty acids were associated with levels of Aβ peptides. This observation is consistent with studies on n-3 LC-PUFAs in animal models of Alzheimer’s disease and with a lower risk of incident Alzheimer’s disease with higher intakes of n-3 LC-PUFAs in the same population. What is also striking in this report is that abnormal Aβ42 peptides, hallmarks of Alzheimer’s disease, were detected in the plasma of non-demented older adults with no other symptoms of impaired cognition. It would be useful to know whether the increased consumption of n-3 LC-PUFAs would affect plasma Aβ peptide concentrations over time. Gu Y, Schupf N, Cosenetino SA, Luchsinger JA, Scarmeas N. Nutrient intake and plasma β-amyloid. Neurology 2012;78:1832-1340. [PubMed]