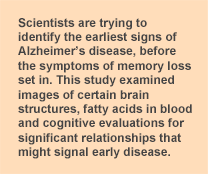 As people live longer, they are more likely to develop one or more of the chronic diseases of aging, particularly dementia. The most common type of dementia in older adults is Alzheimer’s disease, a progressive condition of brain degeneration. We still do not know why some of us develop the condition and others do not. Neither do we know how to prevent it. Moreover, once Alzheimer’s disease sets in, there are few treatment options for improvement. Some treatments may be more effective if they are begun in the earliest stages of the condition. The key is to identify those very early symptoms. Preclinical Alzheimer’s disease may be assessed by certain measurements in blood and cerebrospinal fluid, the liquid that bathes the brain. New, non-invasive imaging techniques are being used to detect early changes in various brain structures that might signal the development of the disease. As the disease progresses, symptoms of mild cognitive impairment develop. These are recognized as memory loss, declining ability to think clearly and greater difficulty in taking caring of oneself. More than half of individuals who develop mildly impaired cognition progress to Alzheimer’s disease. Scientists are intensively searching for ways to halt the progress of impaired cognition and maintain brain function. It would be helpful if there were good markers for early tissue changes in the aging brain, prior to the decline in cognition. Using both biochemical markers in blood and brain images, a team of investigators in Canada and France examined whether changes in blood omega-3 fatty acids were related to structural changes in different brain structures. Changes in the brain’s content of DHA and blood levels of EPA and DHA have been linked to the development of Alzheimer’s disease, but findings have been inconsistent. The study included 72-year-old residents in Bordeaux, France, who agreed to have their blood omega-3 fatty acids measured, brain images taken and cognitive scores evaluated at the beginning of the study and after 4 years. 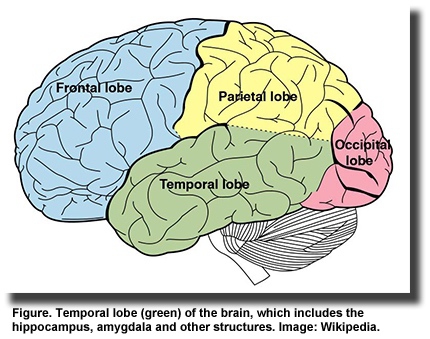 The participants’ brain regions were assessed using magnetic resonance imaging, which enabled the investigators to measure the gray matter in specific structures in the medial temporal region. This area involves memory, learning and other functions and is among the earliest affected by Alzheimer’s disease. The researchers evaluated the participants’ cognitive ability and depressive symptoms with widely used tests. Over the 4-year period, gray matter decreased in the whole brain at an average rate of 0.2% per year. But atrophy (brain tissue loss) was greater in the hippocampus, parahippocampus and amygdala regions, varying from 0.5% to 1.0% loss. Blood EPA levels were significantly associated with these changes, with higher EPA levels associated with less gray matter loss, especially in the right amygdala. Further, greater loss in the right amygdala was associated with higher scores for depressive symptoms. Losses in the left amygdala were linked to poorer cognitive scores, while losses in both areas were associated with a decline in verbal fluency. Thus, decreases in the gray matter of the amygdala might signal greater cognitive decline later. 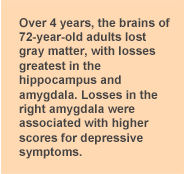 Another interesting observation was the association with EPA, and not DHA, with changes in the right amygdala. Many studies have linked DHA levels to different aspects of brain function and behavior, while EPA has less frequently been linked to brain function. The main exception to that general statement is the association between EPA and depressive symptoms. The observed association might mean that change in EPA might predict a loss of gray matter in the amygdala, for example. The association does not mean that one factor causes the other.

There is evidence from other studies supporting these observations. For example, higher EPA levels in blood were associated with less severe depressive symptoms in an earlier study by these investigators. Changes in the volume of the amygdala have also been reported in patients with depressive symptoms. This important study provides good evidence that brain imaging could be a useful approach to identify brain changes in the early stages of cognitive decline. It also suggests that low blood EPA might be an additional marker for the risk of cognitive decline and for depressive illness. The hope is that others will replicate this approach to the early detection of impaired cognition so that these observations can be confirmed or refuted.