No Less Gestational Diabetes or Preeclampsia with DHA Supplementation in Pregnancy 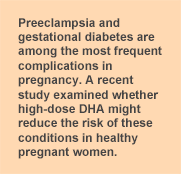 Preeclampsia, a condition of hypertension and proteinuria that may develop late in pregnancy, and gestational diabetes mellitus are two of the most common medical complications of pregnancy. Women with hypertension prior to pregnancy are more likely to develop preeclampsia, which then increases the risk of preterm delivery. Preeclampsia and eclampsia together are among the top 3 causes of maternal morbidity and mortality worldwide. Preeclampsia affects 3% to 5% of all US pregnancies, but the prevalence is higher in developing countries with limited access to prenatal care. The risk of developing preeclampsia is greater in women with higher body mass index and excess weight gain during pregnancy. Gestational diabetes mellitus is abnormal glucose tolerance that is first detected in pregnancy. Its prevalence, according to a recent literature review, was estimated between 1.7% and 11.6% for advanced economies, with ethnicity a contributing factor. However, the Hyperglycemia and Adverse Pregnancy Outcome Study reported a frequency of 17.8% (range 9.3 to 25.5%), in a multi-center study conducted in the U.S. using a 75-g oral glucose tolerance test in mid to late gestation. The higher prevalence estimate might reflect the rapidly increasing incidence of type 2 diabetes worldwide. 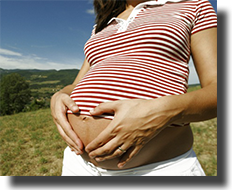 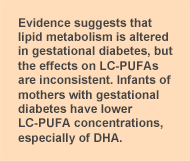 In contrast to the mothers, fetal and neonatal erythrocyte concentrations of ARA and DHA were lower in the offspring of mothers with gestational diabetes compared with controls, suggesting impaired LC-PUFA transport or fetal accretion in gestational diabetes. A different study reported significantly lower DHA concentrations in the plasma phospholipids of neonates born to mothers with gestational diabetes, with reductions in ARA not reaching statistical significance. These differences were not attributable to different dietary intakes between the two groups of mothers, as the diabetic mothers consumed significantly more DHA than the controls. Epidemiological data are inconsistent on the association between the intake of n-3 LC-PUFAs and the risk of developing type 2 diabetes, but there are no data from randomized trials on the effect of n-3 LC-PUFA supplementation and the risk of gestational diabetes. Some studies suggest that women with higher intakes of n-3 LC-PUFAs are less likely to develop preeclampsia, but a systematic review concluded that there was no clear difference in the risk of this condition with marine oil supplementation. These questions were addressed in a multi-center, randomized, controlled study of 2,399 healthy pregnant women who were supplemented with 800 mg per day of DHA from DHA-rich fish oil from approximately the 21st week of gestation through delivery. Control group women consumed the equivalent amount of blended vegetable oil. The primary outcomes were incident preeclampsia defined as pregnancy-induced hypertension and proteinuria, and gestational diabetes defined as mid-pregnancy fasting glucose >5.5 mmol/L and/or a 2-hr glucose concentration >8.0 mmol/L after a 75-g glucose load. The investigators also included pregnancy and birth outcomes and perinatal complications. 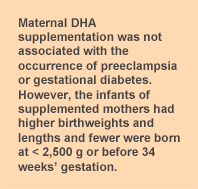 The overall incidence of preeclampsia was 5% according to measures of hypertension and clinical diagnosis, while the incidence of gestational diabetes was 6% based on oral glucose-tolerance tests and 8% by clinical diagnosis. The incidence of either condition and of pregnancy-induced hypertension did not differ between the two groups. Infants of mothers consuming the DHA oil had significantly higher birthweights and lengths, but the z scores (standard deviations from the mean) did not differ between the groups. There was a significantly lower rate of birthweight <2,500 g in the DHA group (P = 0.03) and significantly fewer births before 34 weeks’ gestation, as previously reported. The occurrence of macrosomia, defined as birthweight >4,000 g, was significantly higher in the fish oil group (16.3%) compared with the controls (12.8%), but there was no difference between groups in the number of large for gestational age infants.

Perinatal complications and deaths were significantly higher in the controls than DHA group. Five control group infants experienced neonatal convulsion or brain injury at birth, whereas none in the DHA group did (P = 0.03 for each complication). There were 12 perinatal deaths (stillbirth or death in the first 28 days) in the control group and 3 in the DHA group (P = 0.03). The absence of effect on the incidence of gestational diabetes is in accord with studies of fish oil supplementation in healthy volunteers and those with impaired glucose tolerance, which have reported no effect of n-3 LC-PUFAs on insulin sensitivity or glucose control. Although DHA supplementation in the last half of pregnancy was not associated with risk of gestational diabetes or preeclampsia, the significant reduction in neonatal complications and death merit attention. Zhou SJ, Yelland L, McPhee AJ, Quinlivan J, Gibson RA, Makrides M. Fish-oil supplementation in pregnancy does not reduce the risk of gestational diabetes or preeclampsia. Am J Clin Nutr 2012;95:1378-1384. [PubMed]