Posted by pufa | April 29, 2016
Clinical Conditions
This article at a glance   Aspirin was the first synthetic pharmacological entity to be brought to the market, more than one hundred years ago. It is still one of the most widely taken drugs in the world, largely due to its useful pharmacological actions in controlling pro-inflammatory and pro-thrombotic activity in acute and chronic inflammatory disorders. In addition to its short-term therapeutic use, primarily as an analgesic and as an anti-platelet agent, long-term prophylactic use of aspirin is now also well established. At minimal effective doses in the range of 50 to 180 mg a day, aspirin can significantly reduce the risk of stroke and myocardial infarction in people with a range of vascular disorders. In particular, the so called “low-dose” aspirin intake, i.e. daily oral dosing up to 100 mg, is prescribed by physicians globally for the secondary prevention of heart infarct and stroke. Also, primary prevention with low-dose aspirin is becoming an increasingly attractive prophylactic approach, as a reduced risk of non-fatal myocardial infarction and some types of cancer may outweigh the risk of side effects in specific population and age groups. The antithrombotic effect of low-dose aspirin is due to a selective 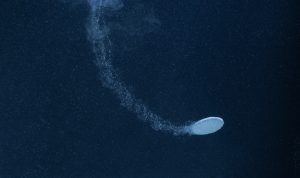 inhibition of platelet cyclooxygenase-1 (COX-1) enzyme, responsible for thromboxane A2 (TXA2) and prostaglandin formation by platelets. Aspirin irreversibly inhibits COX-1 in circulating platelets thereby reducing TXA2 formation, significantly reducing the aggregating and thrombogenic potential of platelets. Even at low doses, aspirin also reduces prostaglandin I2 (PGI2) formation by arterial endothelial cells, which plays a central role in maintaining the vasculature as a non-thrombogenic surface. However, in contrast to platelets, which have only a limited and variable capacity to produce new COX-1 enzyme, rapid cyclooxygenase transcription and synthesis (within hours) in vascular beds that produce PGI2 under basal conditions allows for a net TXA2 suppression relative to PGI2 formation. Selective antiplatelet therapy works if aspirin is given at sufficient time intervals, and is of particular relevance in the context of atherosclerosis to avoid thrombosis at unstable plaque surfaces. Aspirin has a range of additional targets, through the acetylation of several important regulatory enzymes and transcription factors, leading to activation of anti-inflammatory, inflammation resolving, and chemopreventive/antioxidant pathways. Protection of endothelial cell function, lowering of coagulopathies and vascular occlusion, analgesia, direct antitumor effects, and limiting platelet-assisted tumor metastasis are important indications for today’s use of aspirin. Short-term aspirin treatment in acute myocardial infarction also has survival benefits that persist long term and are additional to those of fibrinolytic therapy. The favorable thromboprophylactic effect of low-dose aspirin can be increased by prolonged treatment for some years in people with a high risk of occlusive cardiovascular disease. The long-term use of low-dose aspirin is now considered effective in the prevention and treatment of both arterial and venous thrombosis. The permanent inactivation of COX-1 in platelets is central to the wide-ranging pharmacodynamics of aspirin, through changes in platelet physiology affecting multiple organ systems. A well-known limitation/risk of the use of aspirin is irritation and damage to the mucosa of the stomach and upper intestine. This side effect may involve dyspepsia, abdominal distress and serious tissue lesions involving bleeding, perforations and peptic ulcers, and occurs even at low aspirin doses. The incidence of upper gastrointestinal complications (UGIC) depends to a large extent on a patient’s age and underlying individual risk factors. A recent estimate indicates that 29 more cases of major gastro-intestinal bleeding will occur for every 100,000 person-years of primary prevention in healthy persons taking low-dose aspirin. However, in elderly people with existing gastric ulcers, aspirin use can double UGIC rates to over 100 events per 1000 person-years. Concurrent use of other non-steroidal anti-inflammatory drugs (NSAIDs) and anti-coagulant drugs can further aggravate the incidence and severity of gastroduodenal damage. Since concurrent NSAID intake is frequent in patients with chronic inflammatory disorders, a careful evaluation of the benefits of taking aspirin and risks of adverse effects needs to be made on an individual basis.

Among drugs taken concurrently with low-dose aspirin, prescription omega-3 long-chain polyunsaturated fatty acid (LCPUFA), principally EPA and DHA, take up a notable position since indications for omega-3 LCPUFA intake overlap to a certain extent with the indicated use of aspirin. EPA and EPA/DHA combinations are prescribed for the secondary prevention of cerebro- and cardiovascular diseases, primarily to achieve a reduction in elevated plasma triglyceride levels. Although even relatively low doses of omega-3 LCPUFA have measurable effects on ex vivo platelet aggregation, they do not induce bleeding in a clinically significant manner at normal prescribed doses, alone or in combination with other drugs such as aspirin. Since omega-3 LCPUFA enhance the anti-platelet and thrombotic activity of aspirin, reservations on concurrent intake of aspirin and omega-3 LCPUFA do remain with respect to the possibility of enhanced risks for gastro-intestinal tract damage and bleeding. Preclinical research suggests that omega-3 LCPUFA also exert tissue protective effects in the stomach, but it is not yet clearly established if omega-3 PUFA intake modifies the side effect profile of low-dose aspirin intake in humans. Although the combined intake of omega-3 fatty acids and low-dose aspirin is deemed to be safe from results in controlled clinical trials, no information is available about the safety of omega-3 LCPUFA and low-dose aspirin intake from observational studies. In order to evaluate if any relationship exists between the concurrent exposure to low-dose aspirin and omega-3 fatty acids, and upper gastrointestinal complications (UGIC) incidence, a large case-controlled analysis was recently carried out in Italian patients. This study was performed by Roberto and colleagues from the Epidemiology Unit at the Regional Agency for Healthcare Services of Tuscany, and the Italian College of General Practitioners and Primary care, both in Firenze, Italy. The estimation of UGIC incidence in patients concurrently exposed to low-dose aspirin and medications containing omega-3 fatty acids was achieved through analysis of patient data stored in electronic medical records contained in a large Italian general practice database, the Health Search-IMS Health Longitudinal Patients Database. This primary care database is maintained by the Società Italiana de Medicine Generale e delle Cure Primarie, and contains clinical data from over 1.5 million patients. Records suitable for research purposes are provided by a network of 700 primary care physicians across Italy. The researchers extracted the study cohort and their associated clinical information, drug prescriptions, and lifestyle information based on several criteria: patients were at least 18 years old and had been diagnosed with cerebrovascular ischaemic or coronary heart disease during a 10-year period (from 2002 until end 2012). Patients that already had a gastrointestinal disease or were already prescribed aspirin or omega-3 fatty acids prior to the defined study period, or for whom less than one year of clinical data was available, were excluded. 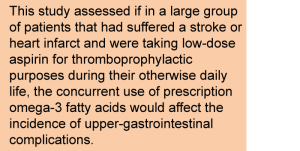 Of the 20,287 patients who suffered a stroke or heart infarct during the 10-year period, 1,976 individuals had also experienced an UGIC. These cases were identified using a validated extraction strategy using standard diagnostic ICD-9-CM codes, as well as keywords used in the free text provided by physicians in medical reports. The specific codes and keywords employed identified diagnoses of ulcers, bleeding, perforations, and inflammatory events in the oesophagus, stomach, jejunum and duodenum. The date of first occurrence of an UGIC was taken as an index date, and used to compare UGIC incidence with control patients. An UGIC incidence rate was calculated for the entire study cohort by dividing the number of cases by the summed total number of person-years during follow-up (the time for each patient in the cohort until the end of the study period, the index date in case of UGIC, death, end of registration with their physician, diagnosis of cancer, or diagnoses of a different gastro-intestinal disease). Up to ten control patients that had not suffered an UGIC during the study period were randomly selected from the remaining study cohort, and matched to each UGIC case based on index date, date of cohort entry, age, gender, and duration of follow-up. It was possible to match 1908 UGIC cases up to ten controls each. Patients in the study cohort (average age 70 years, 57% men) had an overall UGIC incidence rate of 22.8 per 10,000 person-years. Comorbid disease incidence was overall similar between cases and matched controls, except a higher percentage of cases had respiratory disease (chronic obstructive airway disease and asthma), and reduced incidence of diabetes and ischaemic stroke. Use of prescription low-dose aspirin was identified from the ATC therapeutic drug codes B01AC06 and B01AC56, and prescription omega-3 fatty acids with C10AX06 (omega-3-triglycerides including other esters and acids). Concurrent pharmacotherapy with other drugs, measured in the year preceding the index date, was significantly higher in cases than controls, in particular the use of proton-pump inhibitors (74% vs 28%). Follow-up was 2.5 years on average for cases and controls. To determine if any relationship between concurrent intake of low-dose aspirin and omega-3 fatty acids and UGIC might exist, the researchers took three approaches: a primary analysis that addressed the “recency” of concurrent intake and UGIC incidence, a secondary analysis that investigated the effect of duration of concurrent intake in current users (less than 30 days before UGIC), and a sensitivity analysis that determined how different values of the independent variable (timing and duration of concurrent intake) impacted UGIC incidence. 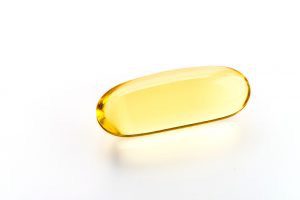 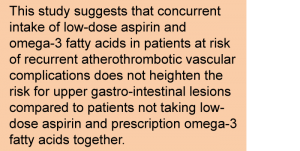