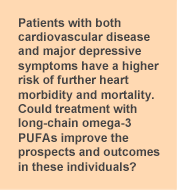 Depressive symptoms and anxiety are common occurrences among patients with coronary heart disease. These conditions adversely affect the prognosis of heart disease patients and increase the risk of cognitive decline. For example, one study reported that the risk of major adverse cardiac events over 2 years in men with acute coronary syndrome was increased in the presence of depressive illness and elevated C-reactive protein. A recent analysis of the prevalence of depressive symptoms in patients from 22 countries who were hospitalized for coronary heart disease reported a prevalence in men of 8.2% to 35.7% and in women of 10.3% to 62.5%. In the U.S., the point prevalence ranges from 15% to 23% for patients with coronary heart disease. Depressive illness increases the risk of further cardiac morbidity and mortality and carries its own morbidity, which further undermines a patient’s prognosis and quality of life. Conversely, patients with major depressive disorder without cardiovascular disease had higher cardiovascular risk factors and lower omega-3 index values compared with sex-matched healthy controls. A common factor in the origins and amelioration of cardiovascular and mental disorders is diet. Nutrients and dietary patterns associated with improved mental health include magnesium, folate, zinc, selenium, vitamins B12 and B6, n-3 LC-PUFAs and traditional rather than Western diets. Low folate status was reported in individuals with depressive symptoms, while higher serum folate was correlated with a lower occurrence of depressive symptoms in Japanese adults. Supplementation with folic acid plus vitamins B6 and B12 was not associated with reducing the severity or incidence of depressive symptoms over 2 years in older men, but low vitamin B12 plus supplemental folate was linked to more rapid cognitive decline in older adults in the Framingham study. On the other hand, low plasma B12, but not folate, was associated with higher depression and poorer cognition scores in 2 large US adult cohorts. Thus, several B vitamins may be associated with the risk of depressive illness, but the interactions among them and the levels involved are highly variable. 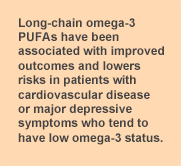 Less is known about the relationship between n-3 LC-PUFA status or treatment in patients with cardiovascular disease and depressive illness. One study in post-myocardial infarction patients reported that patients with depressive illness had significantly higher ratios of ARA:EPA compared with nondepressed patients, suggesting the n-3 LC-PUFA levels were lower in the depressed patients. A recent study assessing plasma n-3 LC-PUFAs in patients with chronic heart failure and major depressive disorder reported significantly greater survival over a median follow-up time of 496 days (1.4 years) in those with higher concentrations of DHA (3.1% vs 2.3%) and EPA (0.5% vs 0.3%) compared with those who died. However, a study of low-dose EPA + DHA supplementation for 40 months in survivors of myocardial infarction reported that neither these fatty acids nor alpha-linolenic acid affected depressive symptoms. Subgroup analysis in that study reported an inverse association between n-3 LC-PUFA supplementation and depressive symptoms. 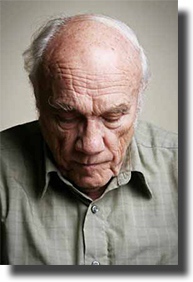 This article describes findings from a secondary analysis of a randomized controlled trial in patients who had had a myocardial infarction, unstable angina or ischemic stroke within the preceding year. Participants were randomly assigned to consume one of the following supplements: B vitamins (folate, vitamins B6 and B12), 600 mg of n-3 LC-PUFAs with EPA:DHA of 2:1, both supplements or a placebo for 1 year. Depressive symptoms were assessed with the French version of the self-administered Geriatric Depression Scale given at 3 and 5 years of follow-up. The final sample included 2,000 participants with a mean age of 61 years and a median follow-up of 4.7 years. At baseline, 6.2% of participants reported using antidepressant medications. For statistical analysis, participants were categorized in two groups: those with evidence of any depression who had an evaluation score of  >10, and those without depressive symptoms having scores ≤10. At follow-up, 31.3% of participants reported any depressive symptoms, with 6.7% having moderate to severe symptoms (scores >20). Women were more likely than men to report symptoms of depressive illness and use of antidepressant medications. In the total sample and analysis by sex, consumption of B vitamins was not related to the presence of depressive symptoms. Similarly, there were no effects of n-3 LC-PUFA supplementation associated with depressive symptoms among all participants. However, when the analysis was stratified by sex and adjusted for multiple confounders, consumption of n-3 LC-PUFAs was positively associated with depressive symptoms in men (odds ratio = 1.28; CI, 1.03 – 1.61), but not in women (odds ratio = 0.78; CI, 0.51 – 1.20). The association remained when participants who used antidepressants at baseline were excluded. In a separate report, the investigators observed no significant effect of B vitamin or n-3 LC-PUFA supplementation on the occurrence of hard coronary events. 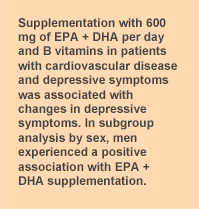