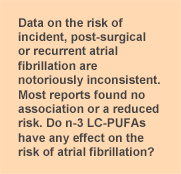 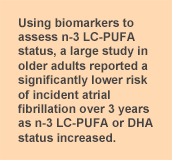 The investigators measured plasma phospholipid fatty acids approximately 3 years after baseline. In a subset of samples, they evaluated the change in dietary exposure over time using blood samples obtained 13 years after baseline. With these data, they were able to adjust the regression data for regression dilution bias and estimate how usual n-3 LC-PUFA levels relate to atrial fibrillation. Consistent with their previous dietary associations, the investigators observed a significant reduction in the relative risk of incident atrial fibrillation with higher concentrations of total n-3 LC-PUFAs and DHA in plasma phospholipids in multivariate analysis (Table). After correction for regression dilution bias, the relative risk associated with the highest quartile of total n-3 LC-PUFAs was 0.57 (95% CI, 0.39 – 0.82). A similar correction for DHA led to a relative risk of 0.65 (95% CI, 0.45 - 0.93). In additional multivariate analysis, adjustment for plasma phospholipid total n-3 LC-PUFAs attenuated the previous association between fish consumption and atrial fibrillation by 82% for those consuming 1 to 4 fish servings a week. These results support data from the Finnish study noted above.

In the second study, researchers led by Noelle Gronroos evaluated data from the Atherosclerosis Risk in Communities Study to determine whether the consumption of fish or plasma phospholipid levels of DHA and EPA were related to the risk of incident atrial fibrillation. There were 14,222 participants recruited from 4 US communities who averaged 54 years of age. Fish consumption was estimated from food frequency questionnaires. The investigators analyzed plasma phospholipid fatty acid concentrations in samples from 3,757 Minnesota participants. Those who had prevalent atrial fibrillation or whose race was neither white nor black or had implausible energy intakes were excluded from the analysis. The average follow-up time was 17.6 years.

The consumption of all fish, canned tuna, oily fish or other fish and of DHA plus EPA was not associated with risk of incident atrial fibrillation in multivariate analysis, regardless of the amount or type of fish consumed. Furthermore, plasma phospholipid DHA + EPA were not associated with risk for incident atrial fibrillation. For DHA alone, the association was U-shaped among the quartiles of DHA, with the greatest risk observed in the first and fourth quartiles. EPA was not associated with risk. Thus, this large cohort study supports four other prospective studies that failed to show an association between n-3 LC-PUFAs and incident atrial fibrillation. It is noteworthy that the highest quartile of tuna or baked fish consumption in the Wu study reflected more than double the amount consumed in the Gronroos et al. study, suggesting that the amount of n-3 LC-PUFAs consumed could be important. Dose might also explain the differences observed in this study and those reported in the Finnish and Cardiovascular Health Studies for plasma phospholipid DHA concentrations. 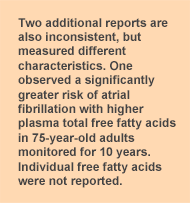 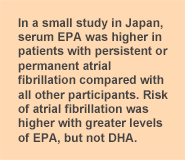