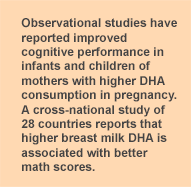 Several observational studies have reported that infants and children of mothers who had higher intakes of fish or n-3 LC-PUFAs in pregnancy score higher on cognitive and behavioral tests than children of mothers with low intakes. In the Avon Longitudinal Study of Parents and Children, the children of mothers with higher fish consumption were significantly less likely to have low verbal IQ scores and were more likely to have higher scores for social development, prosocial behavior, communication and fine motor skills. Greater maternal fish consumption was also associated with higher developmental scores at 18 months of age in the Danish National Birth Cohort. Others have also reported that higher prenatal DHA exposure was associated with beneficial effects on memory processing at 11 years of age. Benefits of higher fish consumption in childhood were also associated with improved school performance in Swedish adolescents and in Dutch high school students. However, not all studies support a positive association between the consumption of long-chain (LC) PUFAs in infancy or n-3 LC-PUFA supplementation in pregnancy and cognitive performance, as a recent review of randomized trials reported. At the same time, it is widely recognized that LC-PUFAs are needed for optimum brain development during fetal and infant life. 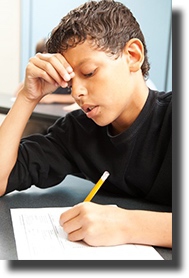 A new ecological overview of the exposure of infants in 29 countries to varying amounts of DHA in breast milk and their cognitive performance at age 15 has been published. The study used literature values on the DHA content of breast milk in different countries and the 2009 mathematics scores from the Programme for International Student Assessment (PISA). The test evaluates the skills and knowledge of participants in reading, mathematics and science literacy and is administered every 3 years by the Organization for Economic Cooperation and Development (OECD) to 15-year-old students in OECD and non-member countries or economies. In 2009, 65 countries conducted the PISA assessment, of which 28 had data on breast milk DHA and the control variables, GDP per capita and educational expenditures per pupil. The investigators also controlled for daily per capita intakes of energy, fat, protein and carbohydrate for each country, using data from the Food and Agriculture Organization. Data were analyzed using bivariate and multiple regressions. Maternal milk DHA, GDP per capita and educational expenditures were all significant predictors of the math scores, but none of the macronutrients showed a significant association. Of the 3 top-performing countries in math, Shanghai-China, Singapore and Hong-Kong-China, 2 had breast milk DHA concentrations greater than 0.4%. Singapore was not included in this analysis. Maternal milk DHA was significantly related to the consumption of seafood or total fish and inversely related to the intake of total, vegetable and animal fat. The consumption of total fish and total fat together explained 61% of the variance in cross-national breast milk DHA levels.

Of the 28 countries included in this report, 12 had math scores significantly higher than the OECD mean score. In 8 of these, breast milk DHA concentrations were at or above 0.3%, and 6 had levels above 0.4%. Eleven of the 28 countries had scores significantly below the OECD mean, 9 of which reported breast milk DHA concentrations below 0.3%. Only 2 countries deviated markedly from the general trend. In one, but not the other, the math score exceeded the mean score, yet both had breast milk DHA concentrations less than 0.2%. Considering the limitations inherent to ecological studies, this report demonstrates an association between prenatal exposure to higher levels of DHA and improved cognitive performance. While not all of the highest-scoring countries reported DHA levels above the worldwide average of 0.32%, two-thirds of them did. Thus, these observations are consistent with the previously reported cognitive and neurodevelopmental benefits associated with higher intakes of DHA in early life. They also emphasize the contribution of individual affluence and national investment in education programs to student academic achievement.   Lassek WD, Gaulin SJ. Maternal milk DHA content predicts cognitive performance in 28 nations. Matern Child Nutr 2013; Jun 25 doi: 10.1111/mcn.12060 [PubMed]