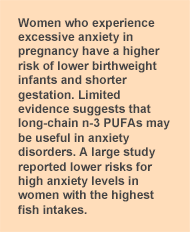 Excessive anxiety during pregnancy increases the chances of lower birthweight and shorter gestation and may adversely affect the infant’s neurodevelopment. Cognitive behavioral therapy, prescription medications, yoga, complementary therapies and exercise may be beneficial in reducing maternal anxiety during pregnancy, but almost no attention has been given to the potential usefulness of improved nutrition in alleviating stress and anxiety. The growing literature describing the benefits of n-3 LC-PUFAs in treating a variety of mood disorders without the side effects of pharmacological interventions suggests that these fatty acids might be appropriate for anxiety management among pregnant women. An Australian observational study reported that higher intakes of plant foods were associated with reduced anxiety, depression and perceived stress in healthy adults. A study among healthy medical students reported that supplementation with 3 g per day of n-3 LC-PUFAs for 12 weeks was associated with a significant reduction in anxiety symptoms. However, another small study in which participants consumed vegetarian diets without meat or fish, but not those following an omnivore or fish and vegetable diet, scored higher in short-term mood evaluations compared with those consuming meat, poultry and fish. One report suggested that supplementation with n-3 LC-PUFAs in nonhuman primates was associated with reduced anxiety and better spatial memory performance compared with control animals. Recently, a study among nonpregnant Australian women reported that those in the highest tertile of DHA intakes were nearly 50% less likely to develop anxiety disorders compared with women in the lowest tertile. 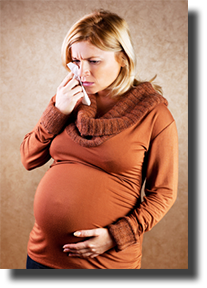 Investigators participating in the Avon Longitudinal Study of Parents and Children (ALSPAC) in the UK explored the relationships between 5 dietary patterns in women at 32 weeks’gestation and their scores on the anxiety components of the Crown-Crisp Experiential Index. Dietary patterns were previously identified from principal component analysis and anxiety scores were derived from the self-administered assessment. As there is no established cutoff for this index, the researchers selected the top 15% of anxiety scores, which was equivalent to a score of 9 or more on the 16-point scale. The researchers determined the frequency and type of seafood consumed from 3 questions in the food frequency questionnaire, from which they estimated the participants’ n-3 LC-PUFA intake. To develop their theoretical model for dietary patterns and anxiety, the investigators identified sociodemographic, socioeconomic, lifestyle, obstetric and chronic stress and life events variables potentially related to high levels of anxiety. Each was assessed for association with anxiety with bivariate logistic regression analysis and those with a P value less than 0.2 were included as confounders. Scores for each dietary pattern were grouped into tertiles and the lowest third was considered the reference category. Independent effects of each dietary pattern were tested for all variables plus total energy intake. The final model was adjusted for total n-3 LC-PUFAs from seafood. The relationship between the frequency of fish consumption and anxiety was tested using 3 categories of consumption: never or rarely, once in 2 weeks and 1 to 3 times per week or more. 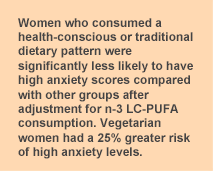 Complete data for diet, completed anxiety questionnaires and details on all confounding variables were available for 9,530 women, 66% of the initial enrolment. The 5 dietary patterns were: health-conscious, traditional, processed foods, confectionery and vegetarian. The variables associated with high levels of anxiety were age less than 25 years, lower education, unemployed, living in public (council-owned) housing, more crowded household, 2 or more children, history of abortion and miscarriage, smoking, high levels of adverse life events in childhood and recently and high levels of chronic stressors. Results from the multivariate logistic regression analysis of dietary pattern and anxiety revealed that women with health-conscious and traditional habits were significantly less likely to have high anxiety scores compared with the other groups after adjustment for n-3 LC-PUFA consumption. The risk of high anxiety symptoms was lowest among women in the highest tertile of the health-conscious pattern (odds ratio: 0.77; 95% CI, 0.65 to 0.93). Interestingly, women in the highest tertile of vegetarian diets were 25% more likely to have high anxiety scores compared with those in the lowest tertile. Processed and confectionery diets were unrelated to the anxiety scores. Multivariate regression analysis for n-3 LC-PUFA intakes and anxiety scores (Figure 1) showed that women who consumed no seafood n-3 LC-PUFAs were 53% more likely to have high anxiety scores than women who consumed more than 1.5 grams per week. Women consuming between 100 and 400 mg of n-3 LC-PUFAs per week were also at significantly greater risk of high anxiety scores (odds ratio: 1.36; 95% CI, 1.14 to 1.63). Similar findings were seen for higher anxiety risk with the consumption of dark or oily fish less than once in 2 weeks compared with intakes 1 to 3 times per week. The relationships between n-3 LC-PUFA intakes and anxiety scores within each dietary pattern showed that for each dietary pattern except processed foods the odds of high anxiety scores were significantly higher for women who rarely or never consumed oily fish compared with those having intakes of 1 to 3 times per week. The risks ranged from 64% greater in the traditional diet group to 39% higher among the vegetarians. 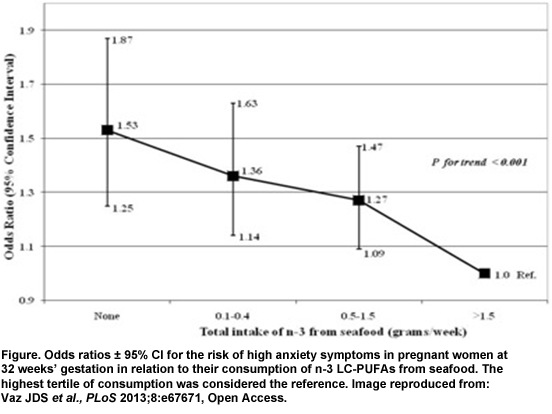 This observational study demonstrated that both eating patterns and seafood consumption may affect the risk of high anxiety scores among women in late pregnancy. Health-conscious and traditional eating patterns were significantly associated with a lower risk of high anxiety scores when the lowest tertile was compared with the highest. These diets include some fish and other sources of n-3 LC-PUFAs, such as eggs, but fish consumption was greatest among those with health-conscious diets. Vegetarian women were 25% more likely to have high anxiety scores and those who never or rarely ate oily fish were at a 43% greater risk. 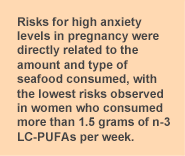