ial intervention trial, the Risk and Prevention Study, has concluded that long-chain n-3 PUFAs (n-3 LC-PUFAs) do not prevent cardiovascular death or disease in patients at high cardiovascular risk, a statement that created a media frenzy. The study’s findings led Dr. Eric Topol of the Scripps Clinic, La Jolla, Calif., to say, “I have an awful lot of patients that come to me on fish oil, and I implore them to stop taking it.” If that were not enough, he added, “Fish oil does nothing ... it is a nada effect.” Is he correct? Other recent trials agreed. The Alpha Omega Trial reported that low-dose supplementation with EPA-DHA or alpha-linolenic acid did not significantly reduce the rate of major cardiovascular events among patients who had previously experienced a myocardial infarction and were receiving state-of-the-art cardiovascular care. Salient features of this study were the low dose of n-3 LC-PUFAs and the high level of care the participants received, a situation that is far from common. A sub-group of patients in the study with a previous myocardial infarction and diabetes did experience significantly less ventricular-arrhythmia-related events, suggesting that the diversity of the participants’ underlying clinical conditions strongly affected the study findings. In a different large trial of EPA+DHA supplementation (1 g/day), the OMEGA trial, patients who had experienced a myocardial infarction within the previous year consumed 1 g/day of n-3 LC-PUFAs. After one year, there were no differences between treated and control patients in any outcome. However, nearly all patients (94%) received acute coronary angiography and 78% had acute percutaneous coronary intervention during the one-year follow-up. Total mortality was <5% during follow-up and this low rate was attributed to medical interventions, which were not enhanced with the consumption of low-dose EPA+DHA. Adding to the confusion are several other recent meta-analyses of the effectiveness of n-3 LC-PUFAs in cardiovascular disease. These studies may be a quick synopsis of the current evidence, but can be problematic, depending on how the studies are selected, the number and quality of the studies and the patient population. For example a meta-analysis of 9 trials of n-3 LC-PUFAs and the risk of sudden cardiac death included patients with implanted cardioverter-defibrillators and those without them. It concluded that n-3 LC-PUFA supplementation did not affect the risk of sudden cardiac death or ventricular arrhythmias. Clearly there were substantial differences among the patient populations. Another meta-analysis of 20 studies on n-3 LC-PUFAs and cardiovascular outcomes concluded that there was no overall effect of n-3 LC-PUFAs on cardiovascular events, such as myocardial infarction, stroke and cardiovascular death. However, these fatty acids protected against vascular death, but not other secondary outcomes. 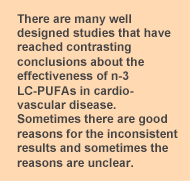 In a meta-analysis of fish consumption, dietary n-3 LC-PUFAs or n-3 PUFA biomarkers and cerebrovascular disease, investigators concluded on the basis of 26 prospective cohort studies that fish and n-3 LC-PUFA consumption were inversely related to the risk of cerebrovascular events, but that in 12 randomized trials, n-3 LC-PUFA biomarkers or supplements were not associated with cerebrovascular disease. On the positive side, a meta-analysis of 8 prospective studies reported a significant reduction in the risk of stroke among women in the highest category of n-3 LC-PUFA consumption, but the risk was not significant when both sexes were included. A different meta-analysis of pretreatment with n-3 LC-PUFAs prior to cardiac surgery reported that in a total of 2,687 patients in 8 trials, supplementation with n-3 LC-PUFAs was associated with a significant 25% lower risk of atrial fibrillation after surgery. The point is that there are many well designed studies and systematic reviews in different patient populations that have reached contrasting conclusions about the effectiveness of n-3 LC-PUFAs in reducing the risks of cardiovascular disease. Sometimes there are good reasons for the inconsistent results and sometimes the reasons are unclear. Much depends on the question being asked or the expectation of what n-3 LC-PUFAs can achieve, the characteristics of the participants including the presence of comorbidities, other medications taken and patient care, the dose of n-3 LC-PUFAs given, the study design and the power of the study to detect a statistically significant effect. Some of these considerations were discussed in detail in the context of cardiac rhythm. With these considerations in mind, this article examines the recent Risk and Prevention Study conducted in 12,513 patients (mean age, 64 years) with multiple risks for cardiovascular disease, but without a history of myocardial infarction. 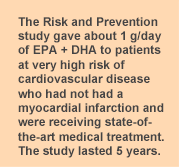 The purpose of the Risk and Prevention study was to assess the efficacy and safety of n-3 LC-PUFA supplements in reducing the risk of cardiovascular mortality and hospitalization for cardiovascular disease in high-risk patients. Participants in Italy were recruited from general practitioner registries and included if they had clinical evidence of atherosclerotic disease and at least 4 cardiovascular risk factors (5 in diabetic participants). The 12,513 participants whose average age was 64 years were randomized to consume 850 to 882 mg/day of EPA + DHA as ethyl esters or an olive oil placebo for one year. This is the same n-3 LC-PUFA treatment as in the GISSI-Prevenzione trial conducted 10 years earlier, which was the largest study of n-3 LC-PUFAs in the secondary prevention of cardiovascular disease. The primary endpoint in the more recent study was cardiovascular death or hospitalization for the condition. Non-fatal myocardial infarction and stroke were also considered primary endpoints. After one year, the investigators revised the primary endpoint to the time to death from cardiovascular causes or first hospital admission for cardiovascular reasons because of the low event rate. This change in protocol illustrates the recent improvements in cardiovascular care and the difficulty of demonstrating an additional benefit from n-3 LC-PUFAs. The median follow-up period was 5 years. At baseline and the one-year follow-up visit, the patients’ general practitioner collected data on medical status, blood pressure, anthropometry, any new diagnosis of cardiovascular disease and related risk factors. At least half the participants had hypertension, hypercholesterolemia or diabetes and 49% were obese. Forty-three percent of participants ate fish once a week, 24% never or very seldom and 6% ate fish 3 or more times per week. 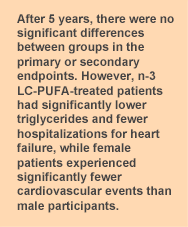 After 5 years, the primary endpoint was reached by 11.7% and 11.9% of EPA + DHA-treated and placebo patients, respectively. At the end of the study, 17.9% and 19.4% of treated and placebo participants had stopped consuming the capsules. Rates of the secondary endpoints, hospitalizations for cardiovascular causes and deaths from cardiovascular or other causes did not differ between the two groups. However, there were 3 statistically significant differences between the groups. One was a significant reduction in plasma triglycerides in the n-3 LC-PUFA-treated patients (-28.2 ± 1.3 mg/dL) compared with the placebo group (-20.1 ± 1.3 mg/dL, P < 0.001). Female participants experienced significantly fewer cardiovascular events compared with male patients (HR = 0.82, 95% CI, 0.67 – 0.99, P = 0.04). There was also a significant reduction in hospital admissions for heart failure in the EPA + DHA-treated patients, 96 (1.5%) compared with 142 (2.3%) patients, P = 0.002. The investigators concluded that the study provided “no evidence of the usefulness of n-3 fatty acids for preventing cardiovascular death or disease in this population.” These results contrast sharply with the findings from the original GISSI-Prevenzione study, which reported a significant reduction in cardiovascular death, especially sudden death, in patients who had experienced a myocardial infarction. The GISSI study involved patients who had had a myocardial infarction, whereas this was an exclusion criterion for the Risk and Prevention study, which the authors admit was underpowered to detect a change in sudden cardiac death. The studies were conducted 10 years apart, during which time there have been several important additions to the standard medical care of high-risk cardiovascular disease patients. As in the Alpha Omega Trial, this study found that patients receiving the best standard of care are less likely to obtain additional cardiovascular preventive benefits from n-3 LC-PUFA supplements. One can also debate whether the dose of about 1 g of EPA + DHA per day was adequate for this group of patients. It has also been suggested that the widespread use of statins (approximately 41% of participants were taking a statin) may have contributed to the lack of response to supplemental n-3 LC-PUFAs. These medications may mask the effects of n-3 LC-PUFAs, thereby appearing to reduce their beneficial effects. The participants also ate fish regularly, with about 75% of participants eating fish at least once a week. As a result, they may not have been relatively deficient in n-3 LC-PUFAs. For patients with dyslipidemia who cannot tolerate statins, n-3 LC-PUFAs offer a safe and often effective approach to lipid management, especially in those with high triglyceride levels. This spate of inconclusive or null outcomes creates substantial confusion about the value of n-3 LC-PUFAs in cardiovascular disease, with some clinicians writing them off entirely. To support the investigators’ conclusion in this study requires one to accept the appropriateness of the dose, dismiss the reduction in cardiovascular risk among women, the lower triglyceride levels and the reduced risk of heart failure among high-risk patients. Add to that, hundreds of well designed studies demonstrating cardiovascular benefits in a variety of patients at high risk of cardiovascular disease and the myriad effects of n-3 LC-PUFAs in neuroprotection, visual function and immune activity and one discerns a broader picture.   Risk and Prevention Study Collaborative Group, Roncaglioni MC, Tombesi M, Avanzini F, Barlera S, Caimi V, Longoni P, Marzona I, Milani V, Silletta MG, Tognoni G, Marchioli R. n-3 fatty acids in patients with multiple cardiovascular risk factors. N Engl J Med 2013;368:1800-1808. [PubMed]