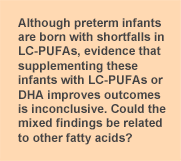 Preterm infants, who have very little body fat, are especially dependent on postnatal feeding for their nutrition needs. Because the transfer of LC-PUFAs from the placenta, which is most rapid in the third trimester, has been interrupted, these infants must obtain their LC-PUFAs from breast milk or preterm infant formula. There is some evidence that LC-PUFA supplementation of preterm infants improves neurodevelopmental outcomes, but several recent reviews report inconsistent evidence of benefit from studies that vary in dose, timing and methods of testing. Nevertheless, accretion of DHA in brain depends on dietary supply. The association between prenatal LC-PUFA status and neurodevelopmental outcomes depends in part on the age at which the outcomes are measured. As discussed by Hadders-Algra, outcomes before the age of 4 months are related to the exposure to both DHA and ARA, while those measured after this critical time are dependent mainly on DHA concentrations. Other factors, such as maternal prepregnancy nutritional status and diet during pregnancy, may also contribute to the outcomes. Typical maternal diets in many Western countries are very low in LC-PUFAs, especially EPA and DHA, and are high in n-6 PUFAs, particularly linoleic acid. This dietary pattern affects breast milk fatty acid composition. High n-6 PUFAs and Mead acid, a marker of essential fatty acid deficiency, have been associated with poorer early developmental outcomes in preterm infants. These same authors also reported that early developmental status in preterm infants was associated with later developmental outcomes. The present study investigated whether the developmental outcomes in preterm infants at 3 months of age and later developmental evaluations were associated with early breast milk LC-PUFA concentrations or the infants’ plasma phospholipids at 44 weeks gestational age. Fifty-one preterm infants with median gestational age of 34 weeks (interquartile range, 32 to 35 weeks) participated in the study. Two mothers were unable to breastfeed and their infants received human milk from a milk bank. Seven mothers stopped breastfeeding before 44 weeks’ gestational age. The median length of exclusive breastfeeding was 3 months. 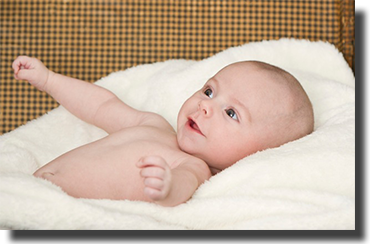 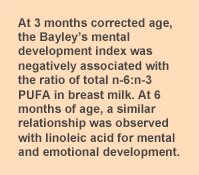 The adjusted analysis also showed that the infants’ phospholipid ARA:DHA ratio was consistently inversely associated with mental and motor development scores at 10 and 18 months of age and with orientation at 18 months. The combined effects of PUFAs, LCPUFAs and confounders explained up to 38% of the variability in the development scores. The consistent relationships between the fatty acids in early breast milk or infant phospholipids with several aspects of infant development from 3 to 18 months of corrected age underline the importance of the fatty acid composition of breast milk and, by implication, maternal fatty acid availability in late pregnancy for preterm infants. High levels of linoleic acid were consistently associated with poorer infant development assessments, while high levels of DHA had positive associations. Interestingly, breast milk fatty acid concentrations for DHA and ARA were higher than the worldwide averages for these LC-PUFAs. This observation might suggest that the negative effects of high linoleic levels in breast milk were not overcome by the amount of DHA available. Others have reported associations between mildly abnormal quality of general movements in 3-month-old term infants with low arachidonic acid and high Mead acid in umbilical arteries and infant erythrocytes, respectively. Mead acid is usually observed only in essential fatty acid deficiency. In one report, eye and hand coordination was negatively associated with cord blood ARA in children at 2.5 years of age. There are several other reports of adverse associations between Mead acid and various measures of neurodevelopment and learning. High levels

of linoleic acid were consistently associated with poorer infant development scores, while high levels of DHA had positive associations. Although fatty acid ratios may obscure changes in the components of the ratio, high levels of linoleic acid were more consistently linked to negative developmental outcomes and DHA to positive outcomes through 6 months of age. Thereafter, higher ARA:DHA ratios were negatively associated with several developmental outcomes, suggesting an imbalance between these fatty acids with potentially suboptimal consequences for infant development. Correlations do not demonstrate causal links, but in this study they were suggestive of PUFA imbalances in the infants’ phospholipid fatty acids and the breast milk of women consuming typical Swedish diets apparently adequate in n-3 LC-PUFAs and high in linoleic acid. Sabel KG, Strandvik B, Petzold M, Lundqvist-Persson C. Motor, mental and behavioral developments in infancy are associated with fatty acid pattern in breast milk and plasma of premature infants. Prostaglandins Leukot Essent Fatty Acids 2012;86:183-188. [PubMed]