Posted by pufa | April 29, 2015
Mental Health and Cognition, Prenatal & Infant Health
This article at a glance   The impact of psychiatric illness during pregnancy is generally an increased risk of obstetrical complications, including premature birth, small for gestational age, and low birth weight. The assessment of the reproductive safety of psychotropic medications must take into account the underlying variables associated with the indication for the psychotropic use. Therefore, prospective pregnancy registries that include diagnostic considerations, psychiatric medications, and other pregnancy exposures are imperative in discerning risks and protective factors in women that have at-risk pregnancies due to psychiatric illness, use of medications, or both.

In women that are at high risk of developing psychiatric problems during pregnancy, either because they have pre-existing psychiatric disorders or because they are currently receiving pharmacological treatment for existing alterations in mood and mental state, a better understanding of psychiatric morbidity (the incidence of physical and psychological deterioration resulting from mental illness) is of high relevance. In women already taking antipsychotics for the treatment of mania, major depressive disorder, and schizophrenia, the relative contribution of untreated illness and exposure to medications upon obstetrical and neonatal outcomes is incompletely understood. Antenatal and post-partum psychiatric illnesses of the mother are also believed to impact the health and development of the child. Furthermore, additional effects from comorbid variables during pregnancy often associated with psychiatric illness, such as substances of abuse and other psychotropic medications, may further adversely affect the health of the mother and child. Practical therapeutic options and interventions that could offer benefit specifically for expecting mothers with psychiatric disorders are currently limited due to an incomplete understanding of the risk factors which drive obstetrical morbidity in this group of patients. 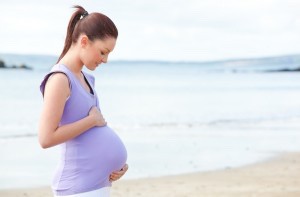 Whilst it is clear that pregnant women with diagnosed psychiatric illness constitute a population with elevated risk of obstetrical complications, it has not been possible to clearly establish which variables best predict risks of adverse outcomes. Differentiating the contribution of illness from medication or other variables that affect psychiatric morbidity might significantly enhance treatment options. Preterm delivery (birth before 37 weeks gestational age) and low birth weight have been associated with psychiatric disorders and the use of anti-depressants during pregnancy. Length of gestation is an important predictor of neonatal mortality risk, and even minor increases (days) in gestational length between 37 and 40 weeks (term) are considered beneficial. Because both psychiatric illness and psychotropic medications may put women at risk of obstetrical complications, strategies to mitigate risk are necessary to promote maternal and infant welfare. Several randomized controlled trials and meta-analyses have demonstrated that the intake of omega-3 long-chain polyunsaturated fatty acids (omega-3 LCPUFA) EPA and/or DHA from marine or algal oils favor small increases in gestational length. This effect is of major importance considering the high neonatal morbidity and mortality as well as health care cost of early preterm birth. These results are one reason for the recommendation to achieve an additional DHA intake of at least 200 mg DHA/d during the second half of gestation from the consumption of fish and/or from fish oil or algal oil supplements. The intake of omega-3 LCPUFA in pregnancy has also been proposed to have potential benefits for reducing blood pressure, but benefits for the treatment of preeclampsia have not been confirmed in several studies.

Initiating an effort to assess whether omega-3 LCPUFA intake constitutes a variable that may permit the stratification of risk of psychiatric morbidity during pregnancy, Freeman and colleagues at the Harvard Medical School and the Harvard School of Public Health, Massachusetts General Hospital in Boston, MA, USA, evaluated data form the US National Registry Pregnancy for Atypical Antipsychotics and evaluated data of pregnant women with psychiatric illness. This ongoing pregnancy registry is designed to assess reproductive safety of psychotropic medications, particularly atypical antipsychotics. The women were between 18 and 45 years old, and had a singleton birth. Women that were prescribed typical and atypical antipsychotics were included in the study group, with a control group comprised mainly of women with similar psychiatric disorders and use of psychotropic medications other than atypical antipsychotics. Therefore, women in both groups - the atypical group and controls – were at high risk for obstetrical complications. In total, data of 233 women followed during their pregnancy were included. The primary outcomes were gestational length, birth weight and preeclampsia in relation to self-reported omega-3 use. The women were interviewed at enrollment, at seven months pregnancy and after giving birth and asked to indicate if they did or did not take omega-3s or fish oil. Information on medication use, demographics, gestational length, birth weight and presence of preeclampsia was obtained from direct reports and medical records. Information of two confounders known to affect gestational length and neonatal development, i.e. the use of anti-depressants and smoking during pregnancy, was also recorded. At the first interview, 42% of the women reported taking omega-3s. The gestational length of the pregnancies in women that reported taking omega-3s was significantly longer by five days. A significantly greater proportion of these women were older (almost two years on average), were more likely to have college-level education, were married, and were less likely to have smoked during the first trimester of their pregnancy. These women were also less likely to have taken anti-depressant medication (49% of omega-3 users compared to 61% among women not taking omega-3), the difference approaching statistical significance (P=0.06). There were no differences in birth weight or presence of preeclampsia between the women reporting taking omega-3s and those who did not. After correcting for a number of potential confounding variables (the use of anti-depressants and smoking during pregnancy, education, marital status, race, and maternal weight), there was no significant association between omega-3 use and gestational length. This study was performed in women at high risk of obstetrical complications during pregnancy. The study has a number of recognized limitations. The study was a secondary analysis, not designed to study the impact of omega-3 on obstetrical outcomes, but rather made use of a pregnancy registry to assess atypical antipsychotics. Omega-3 intake was not significantly related to increased gestational length after correcting for confounders. The women taking omega-3 were also characterized by several other aspects that may contribute to the observed outcome, such as lower anti-depressant medication and less smoking during pregnancy. Self-reported use of omega-3 was not measured objectively via measurement of omega-3 status and no differentiation was made between the types and quantities of omega-3 fatty acids that the women ingested via their diet and supplementation.