Posted by pufa | December 17, 2015
Cardiovascular Health
This article at a glance   Arterial calcification is a process that involves the accumulation of calcium phosphate crystals within the walls of the arteries. Ectopic calcification can occur in different extra-skeletal tissues and frequently associates with aging. Within the cardiovascular system, calcification leads to a reduction in vascular function because stiffened arteries become poor capacity and conduit vessels that cannot adapt to flow pulsatility and organ blood flow demands. Arterial calcification is classified into two general types: calcification of the medial smooth muscle layer (Mönckeberg’s sclerosis), and calcification of the intima of an artery. The second type has received significant research attention because the process of intimal calcification can also occur in the development of atherosclerosis, and hence is a relevant process given the high prevalence of this metabolic vascular pathology. A clear differentiation of both forms of calcification in humans is frequently impossible as it requires histopathology. In some arterial sites both forms are believed to occur, such as in the abdominal aorta, whereas in coronary arteries biomineralization of the intima predominates. Calcification can already occur early during atherosclerotic plaque development, and accelerates during further progressive lesion development, but not all atherosclerotic plaques calcify.

Interestingly, research in the last few years has generated a shift in the understanding of the vascular calcification process from a passive mineralization with deposition of calcium phosphate crystals within tissues to a dysregulated but active formation of true bone-like structures. This new insight views calcification within the arterial vasculature as a result of the improper activation of cells and hormones that normally regulate skeletal bone formation. This comprises the differentiation of vascular smooth muscle cells to acquire a mineralizing chondrocyte-like function. These osteoblast-like cells produce calcium-containing vesicles and a matrix of bone collagen and noncollagenous proteins that can then mineralize if the balance of pro-mineralizing factors outweighs inhibitory factors. Also, monocyte-derived cells with osteoclast-like activity are present in atherosclerotic calcified structures. In contrast to medial calcification, intimal biomineralization and deregulated bone biology has been shown to be closely associated with chronic inflammation, which is also important to the atherosclerotic process. Previous interpretations that calcification of atherosclerotic plaques confers a stabilizing effect on atherosclerotic plaques that become less susceptible to rupturing and subsequent thrombus formation have in recent years become increasingly challenged by new views. This evolving topic of research demonstrates that calcification may also be involved in promoting further plaque remodelling, and is intimately involved in destabilization of the fibrous cap that covers advanced atherosclerotic plaques through the seeding of microcalcified structures from matrix vesicles. Mineralization of the arterial vasculature is also considered an intermediate step in the progression to either weakening of the arterial wall (potentially leading to aneurism) or to vascular stenosis with more extensive calcification and arterial obstruction. Calcification of arterial vessels other than coronary or cerebral vessels was suggested to have predictive relevance for CVD death 30 years ago. Calcification of the abdominal aorta is associated with a marked increased risk of cardiovascular mortality, coronary heart disease and stroke, and constitutes a risk factor for CVD independent of other risk factors. Aortic calcification is positively associated with age, with older people having more severe calcification of the abdominal aorta. Other factors associated to calcification of the aorta are hypertension, smoking, the presence of circulating markers of inflammation (CRP) and bone metabolism (osteoprotegerin, osteopontin), and disturbed lipoprotein and lipid metabolism. Aortic calcification is a common feature in patients with diabetes, chronic kidney disease/renal failure, and osteoporosis.

Given the involvement of inflammation in the misdirected biomineralization process of the intima, and the etiological role of vascular inflammation in the atherosclerotic process, it may be possible to modify or redirect the calcification process and associated arterial complications. Results from animal studies have suggested that vascular calcification can be reduced by increased omega-3 LCPUFA intake. The potential relationship between omega-3 status or omega-3 PUFA dietary intake and aortic calcification in humans has never been assessed. A recent report on the results of a large and long-lasting prospective cohort study has now investigated if dietary alpha-linolenic acid (ALA), EPA plus DHA, or total omega-3 PUFA were associated with the development of abdominal aortic calcification. The study focused on arterial calcification in older people, where the calcification load is highest. The study results were reported by Shang and colleagues from the Faculty of Medicine, University of Melbourne, Australia, and several other institutes in Melbourne and Delhi, India. The study examined 312 selected study participants from the >41000 adults that enrolled at baseline between 1990 and 1994, at age 45-64 years old, for whom readable lateral thoraco-lumbar radiographs were available at follow-up and whose dietary intake characteristics had been determined at study onset. Dietary intake was again assessed at follow-up when the selected study subjects were on average 18 ± 1 years older. Dietary intake was measured using food-frequency questionnaires designed specifically for the Melbourne Collaborative Cohort Study, the prospective cohort study from which the 312 selected participants were selected. Of note, only subjects with a calcium intake greater than 1300 mg/d or below 500 mg/d were recruited. Information on dietary habits including use of milk, sugar, supplements, and type of oils and other fats was collected. The intake of omega-3 PUFA (total, ALA, EPA, DHA) was calculated using an Australian food and compositional database. 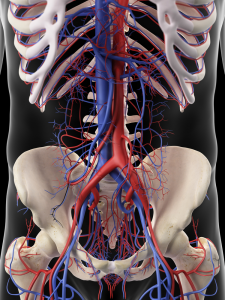