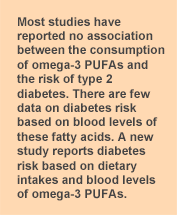 Whether the consumption of fish or long-chain omega-3 PUFAs (n-3 LC-PUFAs) found mainly in fish and shellfish are associated with the risk of developing type 2 diabetes is uncertain. In spite of many studies having searched for a relationship, the evidence for any risk reduction is meager. A review of 16 prospective studies on fish or seafood consumption or n-3 LC-PUFA intakes and incident type 2 diabetes concluded that there were neither harms nor benefits in terms of diabetes risk, but that alpha-linolenic acid may be associated with a modestly lower risk. Another meta-analysis of 11 randomized trials of n-3 LC-PUFAs and insulin sensitivity found no association between n-3 LC-PUFA intervention and insulin sensitivity. Other studies have agreed and reported differences in outcomes between geographical regions. A major problem with the meta-analyses of these data is the heterogeneity among the studies. Obtaining precise estimates of n-3 LC-PUFA consumption from dietary intake data, especially when fish consumption is low, is also fraught with wide variability. A few studies have used biomarkers of n-3 LC-PUFA status instead of dietary consumption, but results to date have not shown any association between n-3 LC-PUFAs and risk of type 2 diabetes. However, higher levels of linoleic acids were inversely associated with risk in the biomarker study. Reasons for the lack of association between higher intakes of fish or n-3 LC-PUFAs are unclear, although some have suggested that methylmercury found in varying amounts in fish might be a contributing factor. This contaminant has also been associated with a higher risk of cardiovascular disease in Finnish men. Thus, it seemed reasonable to examine the risk of type 2 diabetes in the men who had participated in previous studies on heart disease risk factors. There were 2,212 participants from Eastern Finland who were between 42 to 60 years of age at enrollment and free of impaired fasting glucose and type 2 diabetes at baseline. The average duration of follow-up was 19 years. Food intakes, glucose tolerance tests, fasting blood sample collections and medical assessments were conducted at 4, 11 and 20 years after enrollment. 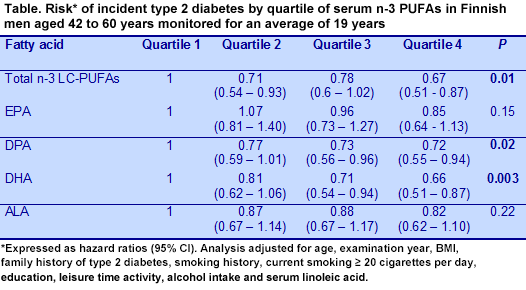 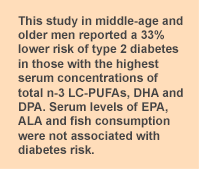 In secondary analyses, the investigators analyzed the associations between incident type 2 diabetes and quartiles of hair mercury content, the consumption of fish, EPA + DHA and alpha-linolenic acid and none was associated with the risk of type 2 diabetes. The lack of an association with dietary EPA + DHA and fish consumption suggests that these estimates are not sufficiently precise compared with serum fatty acid concentrations, which were significantly associated with risk. The authors raised this point in their discussion of these findings. A notable feature of this study is the availability of both dietary intake data and biomarker measurements for n-3 LC-PUFAs. The findings comparing these two assessments argue in favor of the biomarker assessment because it has substantially less measurement error associated with it. Lacking from the study, however, are data for women. The Kuopio Ischemic Heart Disease study has provided a wealth of evidence on the factors in men associated with heart disease and closely related conditions. These observations challenge the data from many previous results. Virtanen JK, Mursu J, Voutilainen S, Uusitupa M, Tuomainen TP. Serum omega-3 polyunsaturated Fatty acids and risk of incident type 2 diabetes in men: the Kuopio Ischemic Heart Disease Risk Factor Study. Diabetes Care 2014;37:189-196. [PubMed] Worth Noting Mahendran Y, Ågren J, Uusitupa M, Cederberg H, Vangipurapu J, Stančáková A, Schwab U, Kuusisto J, Laakso M. Association of erythrocyte membrane fatty acids with changes in glycemia and risk of type 2 diabetes. Am J Clin Nutr 2014;99:79-85. [PubMed] Open Access Sari Niinistö, Hanna-Mari Takkinen, Liisa Uusitalo, Jenna Rautanen, Jaakko Nevalainen, Michael G. Kenward, Mirka Lumia, Olli Simell, Riitta Veijola, Jorma Ilonen, Mikael Knip, Suvi M. Virtanen. Maternal dietary fatty acid intake during pregnancy and the risk of preclinical and clinical type 1 diabetes in the offspring. Br J Nutr 2014;111;895-903. [PubMed]