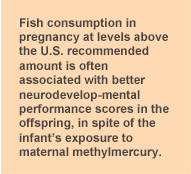 The importance of long-chain PUFAs, especially arachidonic and docosahexaenoic acids, in fetal and infant development is now well recognized, yet the consumption of fish and seafoods, the primary food source of the omega-3 long-chain PUFAs (n-3 LC-PUFAs), is clouded by concerns about the developmental effects of contaminants. All fish contain some mercury in the form of methylmercury, a known neurotoxin. Yet fish consumption in pregnancy at levels above the U.S. recommended amount is most often associated with better performance scores on tests of cognition and behavior in the offspring, even as long as 17 years after birth. These findings have been observed in many countries, including the U.S. where fish consumption is generally low. The presence of methylmercury and other contaminants can be confounding factors, but failure to consider both beneficial and harmful substances in fish leads to misleading data interpretations. The Seychelles Child Development Nutrition Study is a longitudinal, prospective cohort study monitoring the development of the offspring of mothers with high fish consumption. The most recent findings from this study reported either improved performance or no association with prenatal methylmercury exposure in 26 of the 27 outcomes measured. The study has repeatedly observed no consistent pattern of adverse associations between prenatal methylmercury exposure and developmental outcomes. There have been fewer reports on the relationships between prenatal LCPUFAs or methylmercury exposures and language development. A study of high-dose DHA supplementation of mothers in the last half of pregnancy reported that scores for language development in the offspring at 18 months of age did not differ between the DHA-supplemented and placebo groups. A different study of maternal supplementation with n-3 LC-PUFAs in pregnancy reported that the supplemented offspring at 2.5 years of age did not differ from the controls in their scores on the Peabody Picture Vocabulary Test. Others have examined the effects of postnatal n-3 LC-PUFA supplementation on language. What appeared to be a transient adverse effect on early vocabulary development in 14-month-old infants fed DHA-supplemented formula without arachidonic acid was not observed in the infants at 39 months of age. Healthy term infants fed 250 mg DHA and 60 mg EPA from birth to 6 months of age did not differ from controls in any language evaluations at 12 or 18 months of age, but had higher scores on later developing and total gestures. Preterm infants supplemented with higher or lower levels of DHA did not differ from control infants in their overall or subscale scores for language development when assessed at 26 months corrected age.

In the Faroe Islands study, which has consistently reported neurodevelopmental deficits associated with high prenatal methylmercury exposures, 7-year-old children showed deficits in language, attention and memory associated with higher maternal hair mercury concentrations. In contrast, a previous report from the Seychelles Islands described slightly improved language scores in 5.5-year-old children associated with increasing exposure to maternal methylmercury. In that study, however, data on fatty acid exposure were unavailable. In this report from the Seychelles Islands, the investigators examined the Preschool Language Scale scores in the 5-year-old offspring of 300 women recruited from prenatal clinics in 2001. The investigators collected data on both methylmercury and PUFA exposures. Blood samples were obtained from the women at 28 weeks’ gestation and delivery for measurement of lipids and fatty acids in serum. Methylmercury was analyzed in a maternal hair sample taken at delivery. When the children were 5 years of age, the investigators administered 10 developmental tests including finger tapping to assess dexterity and speed and the Preschool Language Scale, Revised Edition, which yields a total language score, verbal ability and auditory comprehension scores. Additional tests were the Woodcock-Johnson Scholastic Achievement Test, measuring letter-word recognition and applied problems; Child Behavior Checklist; and the Kaufman Brief Intelligence Test for IQ in the mothers and children. Several analytical models were devised to evaluate the associations between the test scores and individual PUFAs and various fatty acid combinations. Outcomes were also analyzed for associations with prenatal methylmercury exposure. The primary focus was on DHA and arachidonic acid, but other models included total n-3 LC-PUFAs and ARA; DHA, ARA + linoleic acid; DHA + EPA + alpha-linolenic acid and total n-6 PUFAs; ARA:DHA ratio; and n-6:n-3 ratio. All models were analyzed with and without correcting for methylmercury exposure and adjusted for preselected covariates such as birth weight, age at testing and 6 other factors. 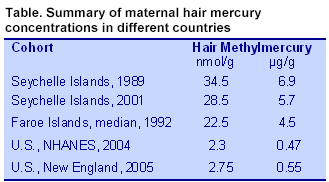 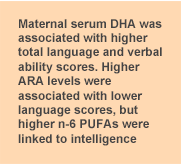