Posted by pufa | December 17, 2013
Cardiovascular Health
Ironically, the studies described in this article closely follow a recent, highly publicized study, which reported that supplementation with less than 1 g/day of long-chain omega-3 PUFAs (n-3 LC-PUFAs) did not reduce cardiovascular mortality and morbidity in statin-treated high-risk heart patients. The Risk and Prevention Study prompted some physicians to dismiss the use of n-3 LC-PUFAs in their cardiovascular patients and the news media had a field day questioning, if not bashing, fish oils. Those bandwagons might have been missing a few wheels.

The studies in this report were not designed with the Risk and Prevention Study in mind, neither do they focus on mortality or morbidity. But like the Risk study, they include patients with persistent hypertriglyceridemia, multiple risk factors for cardiovascular disease (e.g., diabetes, hypertension and obesity) and statin treatment to improve dyslipidemia. The articles focus on the efficacy of n-3 LC-PUFAs in reducing plasma triglycerides, which were significantly reduced in the Risk and Prevention study. These PUFAs have potent, dose-dependent, triglyceride-lowering effects, which may be under-appreciated. Elevated triglyceride levels are associated with significantly higher risks of cardiovascular and total mortality and increased risk of pancreatitis. A recent meta-analysis of 61 prospective cohort studies involving 726,030 participants reported that the relative risk of cardiovascular death was significantly higher for those with borderline high and high triglyceride levels compared with participants whose triglycerides were <2 mmol/L (149 mg/dL). According to the National Cholesterol Education Program, high fasting triglyceride levels range from ≥2.7 mmol/L (200 mg/dL) to ≤6.6 mmol/L (500 mg/dL) and anything above 6.6 mmol/L (500 mg/dL) is considered “very high.” Patients with persistent high triglyceride levels after lipid-modifying therapy are more likely to have diabetes, hypertension, increased body mass index and smoke. Such patients are not rare—approximately 59 million adults (30%) in the U.S. have triglyceride levels ≥2.7 mmol/L (200 mg/dL). Treatment of hypertriglyceridemia relies on drugs such as statins, fibrates and niacin and changes in lifestyle habits. In spite of the recommended medical treatments for dyslipidemia, many patients do not achieve optimum levels and are even less likely to reach target lipid levels if they have cardiovascular disease. What recourse do such patients have? Two recent studies suggest that additional triglyceride reductions are possible in patients treated with statins. Researchers examined the effects of two doses of different preparations of n-3 LC-PUFAs or highly purified EPA on triglyceride or non-HDL-cholesterol levels, which largely reflect the change in very-low-density lipoprotein (VLDL) and low-density lipoprotein (LDL) particles. These PUFAs are among the most effective agents for reducing plasma triglyceride levels and are without the undesirable side effects that may accompany other medications. The first study recruited 229 statin-treated patients from 9 countries on 4 continents who had fasting triglyceride levels ≥6.6 mmol/L (500 mg/dL) and ≤26.6 mmol/L (2,000 mg/dL) and did not have a history of pancreatitis, bariatric surgery, uncontrolled hypertension, HIV or cancer. Patients participated in a 4- to 6-week run-in period to stabilize diet, lifestyle habits, statin medication without ezetimibe and wash out other lipid-modifying medications, including n-3 fish oils, a source of n-3 PUFAs. After an additional 2- to 3-week qualifying session, participants were randomized to consume either 2 or 4 g per day of a proprietary formula of EPA ethyl ester of ≥96% purity or a control of light liquid paraffin for 12 weeks. Participants continued statin therapy with or without ezetimibe. The primary outcome of the study was the fatty acid profiles in plasma and red blood cells and the percent change in plasma triglyceride levels from baseline. The investigators had previously reported that with 4 or 2 g/day of this EPA preparation, triglyceride levels fell by 33% and 20%, respectively, from the corresponding median baselines of 9.0 and 8.7 mmol/L (680 and 657 mg/dL). Triglyceride reduction in patients whose mean baseline was > 10.0 mmol/L (750 mg/dL) was 45% with 4 g/day and 33% with 2 g/day. 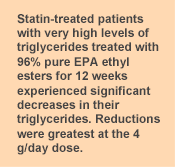 After 12 weeks, 224 participants were included in the final analysis. On average, participants were 53 years of age with a median baseline triglyceride level of 9.0 mmol/L (680 mg/dL). Median plasma triglyceride concentrations fell significantly from baseline values by approximately 27% in the 4-g/day group and about 7% in the 2-g/day group. Changes in triglyceride levels were inversely related to the mean changes in plasma and red blood cell EPA concentrations. Mean concentrations of EPA and docosapentaenoic acid (22:5 n-3) increased significantly in plasma and red blood cells after 12 weeks’ EPA supplementation, with changes more marked in plasma than red blood cells and greater with the 4 g/day dose. As expected, DHA concentrations did not change significantly. Both plasma and red blood cell arachidonic acid concentrations decreased significantly, in red blood cells by -16% and -8% in the 4- and 2-g/day groups respectively. These findings clearly showed the effectiveness of high-dose, highly purified EPA ethyl esters in significantly reducing triglyceride levels in patients with very high triglyceride levels, although final levels remained high. In the second study, Kevin Maki and colleagues in the U.S. and Australia, compared the effectiveness of 2 or 4 g/day of another proprietary n-3 LC-PUFA formula in statin-treated hypertriglyceridemic patients having fasting triglycerides ≥2.7 mmol/L (200 mg/dL) to <6.6 mmol/L (500 mg/dL). The study enrolled 647 men and women, 61 years of age on average, from 96 sites in the U.S. Participants were randomized to consume 2 or 4 g per day of n-3 LC-PUFAs as free fatty acids for 6 weeks. Those consuming 2 g per day also received 2 g per day of olive oil. A third group consumed 4 g per day of olive oil as a control. All participants continued taking the same statin dose used at enrolment. The primary endpoint was the percent change from baseline in non-HDL-cholesterol. Secondary endpoints were percent changes in triglycerides and HDL- cholesterol. A total of 623 participants completed the study. 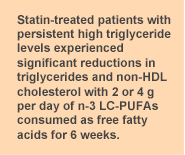 Both groups of participants consuming n-3 LC-PUFAs experienced significant reductions in non-HDL cholesterol, triglycerides and VLDL-cholesterol levels compared with the olive oil control group, with reductions in those consuming 4 g per day substantially greater than in the other groups (Table). LDL-cholesterol increased significantly only in participants taking 2 g per day n-3 LC-PUFAs plus 2 g olive oil, but not in those consuming the higher dose of n-3 LC-PUFAs. There were no group differences in HDL-cholesterol levels. Triglyceride reductions tended to be greater in patients taking high-potency statins, e.g., triglycerides decreased -18 and -27%, respectively, in the 2 compared with the 4 g/day group for the low and high statin potency groups, respectively, but these changes were not statistically significant. 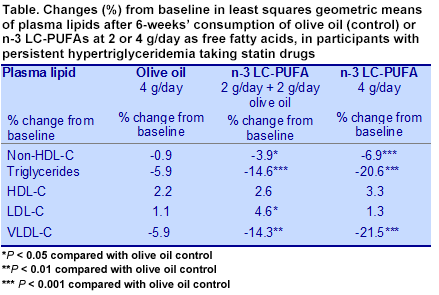 The authors suggested that the free fatty acid formulation evaluated in this study has greater digestive bioavailability compared to n-3 LC-PUFAs as ethyl esters; however, the preparation may not yield greater fatty acid availability at the tissue level. In the first study, 96% pure EPA ethyl esters consumed for 12 weeks at 4 g/day showed a similar decrease in triglycerides of 27% as the free fatty acid n-3 LC-PUFA preparation in patients taking the higher potency statin. However, there is wide variability among patients in the magnitude of their response to different doses of EPA or n-3 LC-PUFAs, suggesting that it is difficult to 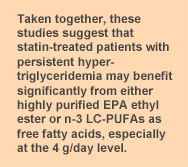