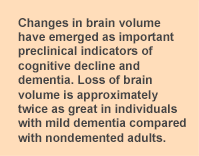 If you want to peer into the brain, magnetic resonance imaging (MRI) is the instrument of choice. MRI is used for identifying and assessing brain changes in healthy aging, normal cognitive behavior, predicting Alzheimer’s disease, studying memory and intellectual development, understanding diverse other brain functions and much more. MRI studies have shown that structural changes in different brain regions occur throughout life, but the patterns differ with aging. Efforts to distinguish what happens in normal, healthy aging compared with pathological changes suggest considerable overlap between the two conditions. For example, brain atrophy occurs in healthy aging, as observed in volume reductions in the entire cerebral cortex, especially in the temporal and prefrontal cortices, and cortical thinning. But some atrophy occurs in areas vulnerable to Alzheimer’s disease, while others happen in less susceptible regions. Atrophy accelerates with advancing age. Changes in brain volume have emerged as important indicators of cognitive decline and dementia prior to the detection of clinical symptoms. Brain volume decreases with aging and diminution of whole brain volume has been detected at the age of 30 years. The rate of decreasing brain volume is approximately twice as great in individuals with mild dementia as in nondemented older adults. Loss of fornix white matter volume, but not hippocampal volume, was reported to predict impaired cognition. Many others have reported loss in hippocampal volume associated with declining cognition. In the offspring of the original Framingham Heart Study participants, those in the lowest quintile of hippocampal volume had a 4-fold greater risk of Alzheimer’s disease. Brain age scores derived from MRI imaging and brain atrophy have been used to predict the conversion of mild cognitive impairment to Alzheimer’s disease. Cortical thinning, especially during early loss in cognition, along with reduced hippocampal volume were associated with early Alzheimer’s disease. Further, cognition declines more quickly in cognitively healthy older individuals with smaller hippocampal volumes. Nutrition may also affect the risk of cognitive decline, Alzheimer’s disease and brain volumes. Nutrient patterns high in B vitamins and long-chain omega-3 PUFAs (n-3 LC-PUFAs) were associated with higher cognitive function and brain volume in a study of 87-year-old women. Low intakes of vitamin D or blood levels of its derivative 25-hydroxyvitamin D were associated with poorer performance on cognitive function tests and a higher risk of Alzheimer’s disease. Higher levels of vitamin D, DHA and physical activity were associated with cortical sparing in healthy adults 23 to 87 years of age. Impaired glycemia has also been linked to increase progression of mild cognitive impairment. However, n-3 LC-PUFAs are the most extensively studied nutrients associated with impaired cognition and risk of Alzheimer’s disease. Focus on these fatty acids derives in part from DHA being the most abundant PUFA in the brain. More than 20 years ago, Soderberg and colleagues reported that the brains of Alzheimer’s disease patients had significantly lower levels of arachidonic and docosahexaenoic acids. Since then, the low consumption of fish and n-3 LC-PUFAs has been associated with a significantly higher risk of Alzheimer’s disease, while those with the highest concentrations of DHA in their plasma phospholipids were reported to have half the risk of developing all-cause dementia. 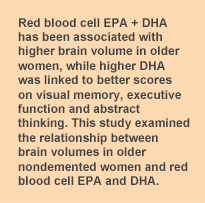 Higher intakes of n-3 LC-PUFAs have been associated with greater gray matter volume in the right hippocampus and right amygdala. Red blood cell EPA and DHA concentrations were associated with white matter hyperintensity volumes and total brain volume in older women in the Framingham heart study who were free of dementia at the time of study. Participants with the lowest levels of red blood cell DHA also had lower scores for visual memory, executive function and abstract thinking compared with those in the higher DHA quartiles. Others reported that higher plasma EPA, but not DHA, was associated with lower gray matter atrophy in the right hippocampal/parahippocampal area and right amygdala in cognitively healthy older adults. However, there are discrepancies between plasma and red blood cell fatty acids and those in the brains of individuals with mildly impaired cognition and Alzheimer’s disease. It has also been suggested that DHA homeostasis changes in older adults in ways that might affect susceptibility to Alzheimer’s disease. To further explore and clarify the relationship between red blood cell n-3 LC-PUFAs and volumes in the whole brain and some specific regions, James Pottala and colleagues at the University of South Dakota examined brain volumes in a subset of participants in the Women’s Health Initiative Memory Study. Participants from 14 U.S. research centers were free of dementia and averaged 78 years of age. The investigators assessed the volumes of the whole brain and the 4 lobes and the limbic, basal ganglia, corpus callosum and hippocampus regions, as well as in gray and white matter. Blood samples were taken at enrolment and MRI brain scans performed a median of 8 years thereafter. Exclusions from the final data set included degradation of blood samples, stroke or transient ischemic attacks since screening, poor quality scans and missing data. Thus, 1,111 participants remained from the initial sample of 1,380 women. 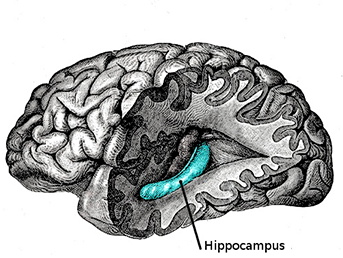 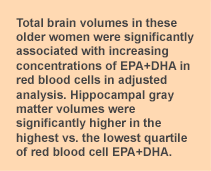 When the investigators examined the brain volumes in 13 anatomical regions, including both white and gray matter, the estimated volume of gray matter in the hippocampus was significantly greater in those in the highest compared with the lowest quartiles of the omega-3 index (EPA + DHA). The difference was 159 mm3 (Q1 vs. Q4, 95% CI, 0.01 – 0.31, P = 0.03). White matter in the corpus callosum was 66 mm3 greater for each SD increase in the omega-3 index, but the difference between Q1 and Q4 was not significant. Finding no relationship between red blood cell EPA, DHA or the omega-3 index in ischemic tissue contrasts with results in the Framingham study where lower DHA levels were associated with greater white matter hyperintensity volumes as a percentage of the intracranial volume. In the Cardiovascular Health Study, 75-year-old women who consumed tuna or other fish ≥3 times per week were less likely to incur subclinical infarcts (ischemic lesions ≤3 mm diameter) or other white matter abnormalities compared with women who ate these fish < once a month. This observational study builds on a growing body of evidence suggesting that higher red blood cell concentrations of n-3 LC-PUFAs, which are associated with higher intakes of these PUFAs, indicate less rapid loss of brain volume and in turn, a slower loss of cognitive function in aging. That the volume of the hippocampus appears to be specially protected suggests that a link with less impaired cognitive function is likely. Considering the many functions of DHA in brain structure and activity, the neuroprotective effects of DHA in preserving cognitive function during aging appear increasingly compelling. Pottala JV, Yaffe K, Robinson JG, Espeland MA, Wallace R, Harris WS. Higher RBC EPA + DHA corresponds with larger total brain and hippocampal volumes: WHIMS-MRI Study. Neurology 2014;82:435-442. [PubMed] Worth Noting Grayson DS, Kroenke CD, Neuringer M, Fair DA. Dietary omega-3 fatty acids modulate large-scale systems organization in the rhesus macaque brain. J Neurosci 2014;34:2065-2074. [PubMed] Zhang M, Wang S, Mao L, Leak RK, Shi Y, Zhang W, Hu X, Sun B, Cao G, Gao Y, Xu Y, Chen J, Zhang F. Omega-3 fatty acids protect the brain against ischemic injury by activating Nrf2 and upregulating heme oxygenase 1. J Neurosci 2014;34:1903-1915. [PubMed]