Posted by pufa | September 30, 2016
Cardiovascular Health
This article at a glance   When the supplemental dietary intake of omega-3 long-chain polyunsaturated fatty acids (LCPUFA) is discussed, a recommendation for the intake of both eicosapentaenoic acid (EPA) and docosahexaenoic acid (DHA) in combination is frequently considered the most prudent. In foods containing omega-3 LCPUFA, mostly of marine origin, both EPA and DHA are present. In many tissues both fatty acids are often present in considerable levels. EPA and DHA are furthermore interrelated metabolically; EPA can be further converted to DHA, although this is generally believed to occur to a very limited extent in humans, and DHA may regulate the levels of EPA by limiting the conversion of EPA to docosapentaenoic acid (DPA ω-3), and/or stimulating the retroconversion of DPA ω-3 back to EPA. On the other hand, EPA and DHA may have distinct functional effects, for example in their ability to modulate triglyceride synthesis and lipoprotein levels in the circulation. The following questions are often raised: “Why does the body employ both EPA and DHA for structural and signaling functions, do they have clearly distinct functions, is one more important than the other, and if so, in which cell types and when?”

A number of intervention studies with purified EPA and DHA has previously provided evidence that both fatty acids impart selective activity on different cardiovascular functions, and which may have different effects on atherosclerosis disease development. Some of the individual hemodynamic and anti-atherogenic effects that have been reported are: i) both EPA and DHA supplementation reduce triglyceride levels, but they have different effects on lipoprotein subclasses, with DHA having more marked effects on increasing HDL2 cholesterol, and increasing LDL particle size, while EPA can lower HDL3 cholesterol (in mildly dyslipidemic individuals, and in type 2 diabetic individuals). ii) DHA has a stronger blood pressure-lowering effect than EPA, iii) DHA improves forearm microcirculatory vascular reactivity, iv) DHA can lower heart rate, v) EPA can lower platelet activation and increase platelet counts, and vi) EPA has a stronger tendency to increase fasting glucose in individuals with mild dyslipidemia. In type 2 diabetic individuals, EPA can increase hepatic glucose output, which may contribute to an impairment of glycemic control. Recently published research shows that questions about the individual roles of EPA and DHA remain of interest to clinical researchers studying heart disease. The first study was carried out by Iwamatsu and colleagues at the Department of Cardiovascular Medicine at Dokkyo Medical University School in Togichi, Japan. The researchers addressed the hypothesis that in patients with advanced stages of atherosclerotic coronary disease, EPA and DHA might play a role in decreasing the risk for acute myocardial infarction. In this setting, EPA and DHA are thought to counteract the pro-coagulation and pro-inflammatory role of arachidonic acid (AA) in plaque destabilization, plaque rupture and atherothrombosis. It is not clear, however, if EPA or DHA individually are involved in reducing major coronary events in advanced atherosclerotic disease, or if both fatty acids play a role. In order to gain further insight into the relative involvement of EPA and DHA, a study was carried out to identify which circulating biomarkers of inflammation and blood lipids are associated most prominently with acute coronary syndrome, i.e. the incidence of myocardial infarction and unstable angina, in elderly Japanese patients. 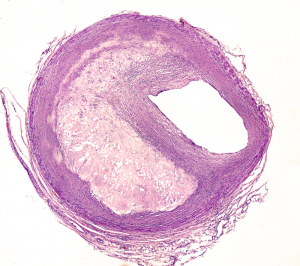 The study focused on a group of 369 individuals (average age 66 years) with suspected or confirmed coronary artery disease and who did not take omega-3 supplements. After diagnostic coronary angiography, patients were classified as having acute coronary syndrome (n=24; patients that had had a ST-segment elevation myocardial infarction (STEMI), a non-STEMI, or having unstable angina), coronary spastic angina, or diagnosed with chest pain syndrome. To distinguish the latter two conditions, patients underwent an acetylcholine provocation test to determine whether the coronary vascular bed responded with a vasoconstrictor response (spastic angina), or was capable of responding with an endothelium-dependent vasodilator response (and subsequently classified as having chest pain syndrome in the absence of further diagnostic information). Next, the concentrations of several clinical diagnostic indicators were measured in venous blood samples obtained prior to the angiographic evaluation. These also comprised serum fatty acid levels (free and esterified combined), including EPA, DHA and AA, from which the ratios of EPA/AA and DHA/AA were calculated. A majority of patients were reported to have hypertension (74%), diabetes (55%) and dyslipidemia (67%), conditions that were controlled by statin treatment (82%) to lower LDL-cholesterol, and by angiotensin-converting enzyme inhibitors/angiotensin receptor blockers (67%) to achieve a lower blood pressure. The EPA/AA ratio (0.35) was significantly lower in patients with acute coronary syndrome than in patients with non-acute or more stable forms of coronary artery disease (stable angina pectoris, old myocardial infarction, chest pain syndrome, coronary spastic angina). A lower DHA/AA ratio was found for the acute coronary syndrome patients (0.78) only when compared to patients with stable angina (0.95). Patients with acute coronary syndrome furthermore had reduced HDL-cholesterol levels compared to the other patient groups combined. Among the various measured parameters, only the EPA/AA ratio was significantly correlated with acute coronary syndrome. The DHA/AA ratio did not discriminate acute coronary syndrome from other heart disease entities.

The results of the study suggest that in elderly Japanese, the serum EPA to AA level ratio may be predictive of the acute manifestations of coronary atherosclerotic disease in comparison to more stable forms of coronary disease and chest pain. In contrast, at this stage of heart disease development in this population, no relationship between acute coronary syndrome and the DHA/AA ratio was found. A limitation of the study is that although individuals who took omega-3 supplements were excluded from the study, no information was provided about fish consumption of the participants. It was not stated whether the patients were fasted prior to blood sampling. A further limitation is the use of ratios of EPA/AA and DHA/AA, neither of which provides information about whether it is the EPA or DHA, or in fact AA, that are altered. The second study was performed by Allaire and colleagues at the Institute of Nutrition and Functional Foods at the University Hospital Center of Québec Research Center, at the Department of Preventive and Social medicine, Laval University and at the Québec Heart and Lung Institute, in Canada. In a double-blind, randomized and placebo-controlled study with a cross-over format, a group of adult men and women (n=154, age 18-70 years) with abdominal obesity and sub-clinical inflammation were randomly assigned to one of three 10-week dietary interventions; i) 2.7 g/day EPA, ii) 2.7 g/day DHA or iii) corn oil (control). Obesity was defined by the International Diabetes Federation, and sub-clinical inflammation by a plasma C-reactive protein (CRP) concentration between 1 and 10 mg/l. The target study group corresponds to a sample of the population with a significantly enhanced risk of developing atherosclerotic lesions over the course of their adult life, with a significantly increased risk of stroke and acute coronary infarction. The subjects enrolled in this study were otherwise healthy. The study design allowed to obtain information on the possible effects of either supplemental EPA or DHA, in contrast to many previous studies addressing the effects of mixtures of EPA and DHA in various ratios (often in the form of fish oil) on systemic markers of inflammation and cardiometabolic risk. The objective was to compare the effect of EPA, DHA or corn oil on circulating markers of inflammation as primary outcomes. The majority of previous studies that had addressed the effects of PUFA on cardiometabolic health documented changes in markers of inflammation as secondary outcomes. Furthermore, this study was relatively large, increasing the statistical power to detect potential changes that previous studies had not convincingly been able to document. In this study a decrease of 10% in CRP levels was considered of clinical significance.

A total of 154 participants was assigned randomly to one of three treatment phases, EPA, DHA, or corn oil, given daily for ten weeks, each with a nine-week washout period between treatments (no supplements taken). Compliance to supplementation was >96%, as determined by calculating the supplements that were returned to study coordinators at each study visit. Measurement of plasma phospholipid fatty acid composition was also used to monitor compliance, in a randomly selected subsample of participants. Twenty percent of participants dropped out during the study. The results of 123 participants who completed the intervention with DHA, and 121 participants receiving EPA, were compared to placebo. The analysis of the results provided remarkable insight into the differences between DHA versus EPA supplementation on the studied parameters. Supplementation with EPA led to a reduction in triglycerides, a decrease in IL-6, and a very small increase in LDL cholesterol (compared to control). In contrast, the supplemental DHA intake favored changes in nearly all measured parameters compared to control: a decrease in CRP, IL-6, IL-18 and TNF-α, and an increase in plasma adiponectin. DHA increased total plasma cholesterol level (~3% increase), cholesterol associated with LDL and HDL, and decreased triglycerides. The levels of the LDL-associated apolipoprotein B remained unchanged by supplemental DHA and EPA intake, suggesting that the observed changes in LDL-associated cholesterol were related to lipoprotein size, and not to the number of circulating lipoprotein particles. When the post-treatment effects of DHA (changes compared to control) were compared head-to-head with those after EPA intake, a significantly stronger influence of DHA was found on IL-18 (decrease), adiponectin (increase), cholesterol (increase in total cholesterol, LDL cholesterol, and HDL cholesterol), and on triglyceride levels (decrease). No evidence of an effect of sex on the studied inflammation markers was found. In men, but not in women, supplemental DHA intake promoted a significantly larger increase in LDL cholesterol level than did EPA intake. 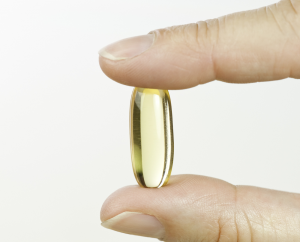 This study suggests that during adult life the effect of dietary intake of DHA on systemic markers of inflammation may be more marked than that of an equal dose of EPA, as well as a more marked effect on blood lipids (cholesterol and triglycerides). The authors indicate that new studies are needed to evaluate how these omega-3 LCPUFA-selective activities, in particular those of DHA, may modulate cardiovascular disease development. Following current thinking that atherogenesis is to a significant extent the result of a poorly controlled and chronic inflammation of the vasculature, a sustained level of omega-3 LCPUFA intake may contribute to counteract pro-inflammatory signals associated with the development of coronary disease. However, not much information is currently available on whether both EPA and DHA are needed to modulate chronic inflammation underlying vascular disease, or if DHA may be more important than EPA to reduce atherogenesis, as suggested by the study of Allaire. Importantly, the levels of two important mediators that were measured, IL-18 and adiponectin, displayed changes with DHA supplementation that corresponded to a shift to an anti-inflammatory profile. IL-18 is a pro-inflammatory cytokine that, among other activities, promotes myofibroblast proliferation, a hallmark of atherosclerotic lesion development. IL-18 is produced by the NLRP3 inflammasome, which is activated by diverse inflammatory stimuli. Adiponectin is an anti-inflammatory and atheroprotective adipokine that is produced by adipose tissue, for which dysregulated secretion into the circulation is often observed in obesity-associated diseases. Interestingly, as suggested by the study of Iwamatsu and colleagues, once advanced coronary heart disease has developed and presents itself as an acute coronary syndrome, EPA may be more important than DHA to limit coronary plaque destabilization, erosion and rupture, thrombosis and/or the ensuing ischemia/reperfusion-mediated myocardial tissue damage. At least one mechanism whereby EPA acts to reduce coronary plaque instability is by its incorporation into plaque tissue and exerting a local anti-inflammatory effect, down-regulating the metalloproteases that weaken the plaque structure. The suggestion that EPA is selectively involved in these ultimate steps in acute coronary syndrome is for the moment based on an association, and its role will need be confirmed with a randomized and controlled study in patients with acute coronary syndrome. 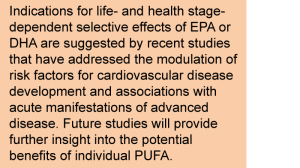