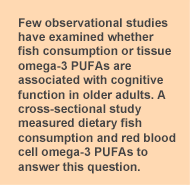 More frequent consumption of fish, especially fatty fish, and higher blood levels of long-chain omega-3 PUFAs (n-3 LC-PUFAs) have been associated with a lower risk of developing dementia and cognitive decline in several prospective cohort studies of older adults. As is often the case, not all studies agree. Fewer investigators have asked the basic question, does fish or n-3 LC-PUFA consumption affect normal cognitive performance in older individuals? Studies in Norway and the U.K. reported a direct association between higher fish consumption and cognitive performance in adults 70 to 74 and 70 to 79 years of age, respectively. However, a randomized trial in the same individuals in the U.K. who were supplemented with 700 mg per day of EPA + DHA or a placebo for 2 years reported no significant decline in cognitive performance in either group. A study in the Netherlands of 807 individuals aged 50 to 70 years reported no association between plasma n-3 PUFAs and cognitive performance on 5 domains. A study of middle-age adults reported that n-3 LC-PUFA intakes were inversely related to the risk of impaired cognitive function. There are few cross-sectional studies that have examined this question, especially using biomarkers, in cognitively healthy older individuals. Vanessa Danthiir and colleagues at the University of Adelaide, Australia, wondered whether long-term fish consumption or more recent n-3 LC-PUFA intakes were associated with cognitive performance in older adults with normal cognitive function. They also considered the influence of the APOE-ε4 allele, which is associated with a higher risk of Alzheimer’s disease and the spectrum of dementia. The researchers recruited participants 65 to 90 years of age from metropolitan Adelaide and excluded those who were taking any n-3 PUFA supplements, had experienced head injury, brain trauma, stroke or transient ischemic attacks, coronary artery bypass surgery, degenerative neurological disease, had a history of alcohol or drug abuse, were taking drugs known to interfere with cognition, had various other medical or mental conditions or scored below 22/27 on a telephone-administered version of the Mini Mental State Examination (MMSE). This score was equivalent to a score of <24/30 on the standard MMSE test. 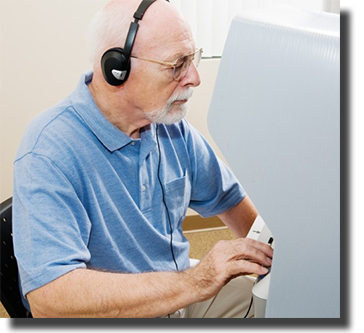 To assess historical fish consumption, the investigators used the Lifetime Diet Questionnaire which asked how frequently participants consumed several species of fatty fish and other fish during childhood, early adulthood, adulthood and middle-age, given the choices of daily, 2 to 3 times/week, 2 to 3 times/month, rarely or never. Current fish consumption was also obtained using a food frequency questionnaire. The investigators measured n-3 LC-PUFAs in red blood cell membranes using gas chromatography. Cognitive function was evaluated using a test battery of 2 or more tests for the following 10 functions: perceptual speed, simple/choice reaction time, speed of memory scanning, reasoning speed, inhibition, psychomotor speed, reasoning, working memory, short-term memory and retrieval fluency. A total of 390 participants were enrolled and 388 provided data for all variables. Historical fish consumption data came from 352 participants obtained 3 months after the baseline assessments. Data for all variables were available for 339 of these participants. At baseline, the participants reported eating fish an average of twice a week, with 60% of intake attributable to white fish. Red blood cell membrane concentrations of EPA, DHA and total n-3 LC-PUFAs, but not DPA, were associated with weekly consumption of all fish and fatty fish, as expected. When the findings on the cognitive performance tests were analyzed in terms of their association with current fish consumption, using the whole sample (388 participants) and a multivariate model, total fish consumption was significantly associated with slower cognitive speed for inhibition, simple/choice reaction time, reasoning speed and memory scanning (Table). More frequent consumption of fatty fish was significantly associated with poorer inhibitory processes and eating white fish more often was associated with slower simple/choice reaction time. Sex or APOE-ε4 status interactions did not occur in any analytical model. Controlling for historical fish consumption did not appreciably alter these findings.

Analysis of the potential effect of historical or habitual fish consumption at different stages of life—childhood through middle age—revealed modest, but significant inverse associations between total fish intake in childhood and perceptual speed and simple/choice reaction times in both the entire sample and just those for whom historical data were available. Cognitive scores were unrelated to fish consumption at all other life stages. 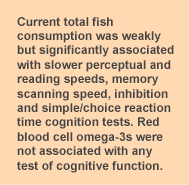 The relationships between the cognitive scores and the total and individual n-3 LC-PUFAs in the red blood cell membranes of all the participants showed no significant associations with any fatty acid in any of the statistical models. The researchers did find a significant interaction between red blood cell membrane EPA concentration and sex for reasoning and perceptual speeds. In males, increasing EPA was associated with faster reasoning and perceptual speeds, but the opposite was true for females. In these participants, EPA constituted less than 20% of the DHA present and about 10% of the total n-3 LC-PUFAs in the red blood cell membranes. These findings do not support the hypothesis that greater fish consumption or higher n-3 LC-PUFA status, as reflected in red blood cell n-3 LC-PUFA concentrations, are associated with better cognitive performance in cognitively normal older adults. Lack of association between fish consumption and cognitive performance has been previously reported, as has the absence of effect on mental well-being of two doses of n-3 LC-PUFA supplementation for 26 weeks in older Dutch adults. A negative association between higher fish consumption and memory or language measures was reported in the highest quartile of fish intake in elderly men in the Netherlands. In a prospective study of aging Canadians, higher plasma concentrations of EPA and DHA were reported in cognitively impaired and demented individuals, respectively, compared with controls. Biomarkers of n-3 LC-PUFA status are generally considered more accurate estimates of fish or n-3 LC-PUFA intake than estimates of dietary intake, which are subject to greater measurement error. In this study, which assessed both dietary and red blood cell n-3 LC-PUFAs, the red blood cell data were not associated with any evaluation of cognitive function. Whether this discrepancy casts doubt on the validity of the dietary intake data as a reflection of n-3 LC-PUFA status cannot be answered. That the associations between current and childhood dietary fish intakes and various cognitive tests were relatively weak (β-coefficients for the regression analyses associated with statistically significant results were generally around -0.1) suggests that these observations might not be of clinical significance. 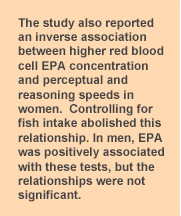