Facilitating Transport of DHA into the Brain

Posted by pufa | August 28, 2014
Brain & Central Nervous System
The brain is rich in docosahexaenoic acid (DHA). This fatty acid is a structural element for brain tissue, plays a number of important roles in neural development and plasticity, and protects the brain from inflammatory insult. The brain is relatively separated from the rest of the body by the presence of a blood-brain barrier, which restricts the uncontrolled access of substances, and possibly infectious material, present in blood, and thus remains relatively isolated from immune reactions occurring in the rest of the body. Oxygen and those nutrients that the brain needs for its function cross the blood-brain barrier through specialized transport mechanisms. Some of these may require energy (active transport by specialized protein carriers), or involve modified diffusion (facilitated diffusion), or involve small vesicles that move across the endothelial cells that line the small blood vessels in the brain (vesicular transcytosis). But how does this privileged organ obtain the DHA it needs? DHA is strongly retained by tissues and also accumulates in specific tissues with high demands for DHA according to a concept termed biomagnification. Biomagnification of DHA implies an active form of accretion by tissues that need substantial levels of DHA - higher than could be delivered by mere diffusion. For example, the placenta employs active transport mechanisms to deliver this fatty acid to the growing fetus. 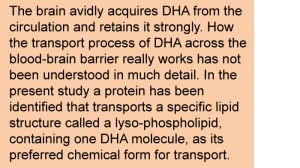 How the brain might be acquiring DHA in an active fashion to satisfy the requirements for DHA is still incompletely understood. Previous research has indicated that plasma unesterified DHA may contribute to the delivery of DHA to the brain, with DHA rapidly esterified into brain lipids, predominantly within phospholipids. Also, a specific chemical form of DHA circulating in blood had been recognized that supports delivery to brain tissue. In this lipid species, DHA is part of a lysophospholipid, which is a phospholipid with one fatty acid instead of the two molecules of fatty acids found in most cell membrane phospholipids (Figure 1). Lysophospholipid-DHA species are found in human plasma bound to albumin, with the DHA distributed about equally in the first and second carbon position of the glycerol backbone. Lysophosphatidyl-choline-DHA had previously been shown to deliver DHA more effectively to the brain than unesterified DHA in the rat, but the specific mechanism whereby this DHA-containing lipid would permit enhanced delivery of DHA to brain tissue has remained undiscovered. 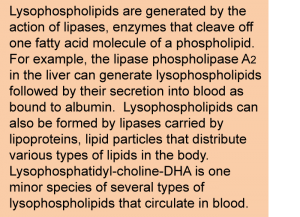 A recent study by Nguyen and colleagues from the Duke-NUS Graduate Medical School in Singapore, describes the identification of a protein called Mfsd2a as an endogenous transporter of DHA into the brain. First, the Mfsd2a protein was shown to be expressed in the endothelial cells that contribute to forming the blood-brain barrier. Knocking-out of the gene coding for Mfsd2a in mice leads to a smaller brain size, and also an increase in anxiety, for example the willingness of the animals to venture out into an illuminated area. Mice also displayed marked deficits in learning and memory. A lipidomic analysis of brain tissue by which all phospholipid and lysophospholipid species were measured and quantitated revealed that brains from Mfsd2a-deficient mice displayed lower levels of those phospholipids that normally contain DHA. The total level of DHA in brain was decreased by approximately 60%. Along with the defect in incorporating normal levels of DHA into brain tissue, mice that had no Mfsd2a protein had a significantly lower number of neurons in the cerebellar and hippocampal regions of the brain. 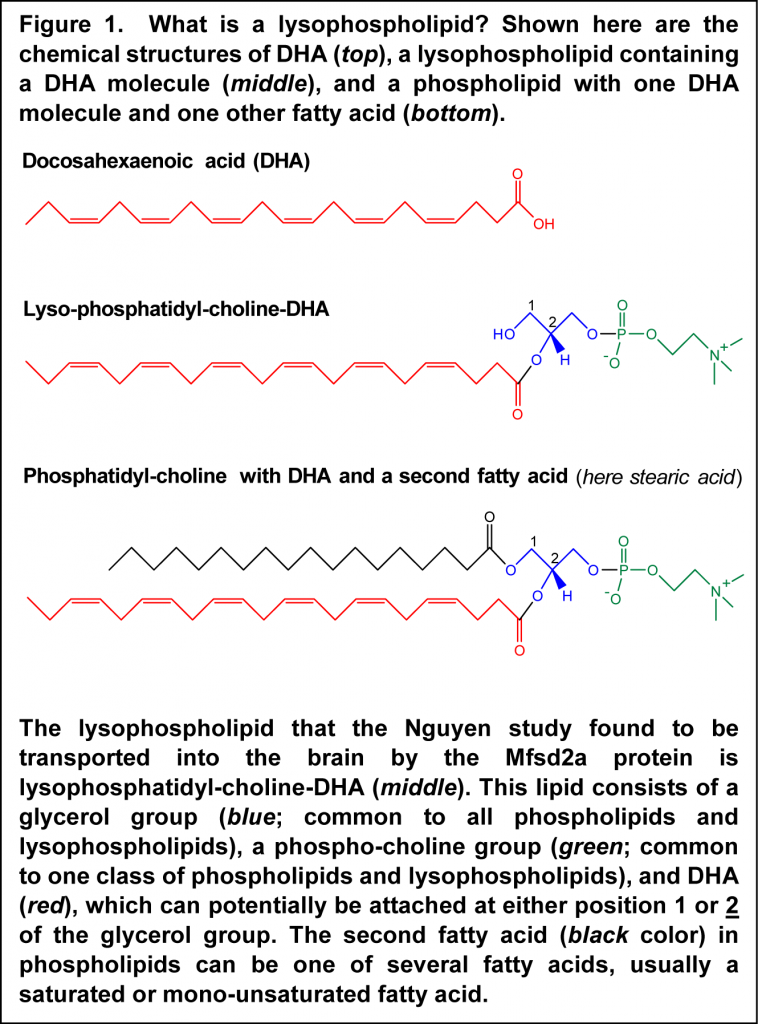 When the Mfsd2a protein was expressed in a cell type that normally does not contain the protein, it rendered the cells capable of incorporating DHA. Using this experimental cell model for DHA uptake studies, the researchers showed that DHA as part of lysophosphatidyl-choline was effectively incorporated into cellular lipids. However, Mfsd2a did not facilitate the transport of free unesterified DHA. Further delineation of the structural requirements required for transport by Mfsd2a established that the lysophospholipid optimally needs the presence of a phosphocholine headgroup and one long chain fatty acid molecule, which can be DHA. A closer look at the concentration range in which lysophosphatidylcholine (LPC) containing DHA (LPC-DHA) was transported into cells revealed that no saturation was observed up to high concentrations, suggesting that the transport rate will increase in correspondence with the concentration of LPC-DHA present in blood and passing along the blood-brain barrier. The efficiency of transport was higher when DHA was the fatty acid contained within the LPC molecule, compared to other fatty acids such as oleic acid or palmitic acid. This specific recognition and transport of DHA was shown to be sensitive to the presence of sodium ions, a characteristic often observed in proteins that facilitate the transport of specific molecules across cellular membranes. The Mfsd2a transporter recognized the LPC-DHA molecule in different forms that may circulate in blood; whether bound to albumin, present within a micellar structure or solubilized as single molecules, the protein facilitated transport into cells. The researchers next showed that when injected directly into the circulation, the uptake of LPC with radiolabelled DHA (LPC-14C-DHA) was reduced by ~90% in mice that did not have Mfsd2a. This indicates that this lipid species is a functional substrate for DHA transport from the circulation to the brain (in mice). 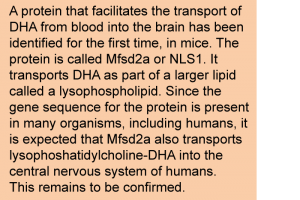 The study on Mfsd2a has been carried out in mice, so it remains to be established that the Mfsd2a transporter is a functional DHA transporter also in humans. The Mfsd2a protein is conserved across various organisms, including fish and mammals, so there is a good chance that Mfsd2a is of significant importance in contributing to the transport of DHA into the human central nervous system. Naturally, this remains to be confirmed. The Mfsd2a transporter has also been found to be important in the formation of the blood-brain barrier, indicating that DHA is also needed for establishment of an intact yet highly selective barrier that the brain needs to function well. The researchers have proposed that the name Mfsd2a is changed to sodium-dependent lysophosphatidyl-choline symporter 1 (NLS1). The demonstration that a structural requirement for DHA transport to the brain is that the fatty acid is part of a specific lysophospholipid suggests that strategies that are focused on selectively increasing DHA delivery to the brain, for example to support the prevention and treatment of neurological disease in which insufficiency of DHA has been implicated, could consider means of increasing this form of circulating DHA. The identification of Mfsd2a (NLS1) as the first facilitative transporter of DHA-containing phospholipids has opened a new door to advance our understanding of how the body distributes essential long chain omega-3 PUFAs in relationship to the demands that specific tissues have for DHA under different conditions of health and availability.   Nguyen LN, Ma D, Shui G, Wong P, Cazenave-Gassiot A, Zhang X, Wenk MR, Goh EL, Silver DL. Mfsd2a is a transporter for the essential omega-3 fatty acid docosahexaenoic acid. Nature 2014 509 (7501):503-506. [PubMed] (on file)   Worth Noting Bazan NG, Molina MF, Gordon WC. Docosahexaenoic acid signalolipidomics in nutrition: significance in aging, neuroinflammation, macular degeneration, Alzheimer's, and other neurodegenerative diseases. Annu. Rev. Nutr. 2011;21(31):321-331. [PubMed] Ben-Zvi A, Lacoste B, Kur E, Andreone BJ, Mayshar Y, Yan H, Gu C. Mfsd2a is critical for the formation and function of the blood-brain barrier. Nature 2014; 509 (7501):507-511. [PubMed] Berger JH, Charron MJ, Silver DL. Major facilitator superfamily domain-containing protein 2a (MFSD2A) has roles in body growth, motor function, and lipid metabolism. PLoS One 2012; 7(11):e50629. [PubMed] (open access) Brenna JT, Carlson SE. Docosahexaenoic acid and human brain development: Evidence that a dietary supply is needed for optimal development. J. Hum. Evol. 2014; Apr 26. [PubMed] Dutta-Roy AK. Transport mechanisms for long-chain polyunsaturated fatty acids in the human placenta. Am. J. Clin. Nutr. 2000;71(1 Suppl.):315S-322S. [PubMed] Luxwolda MF, Kuipers RS, Sango WS, Kwesigabo G, Dijck-Brouwer DA, Muskiet FA. A maternal erythrocyte DHA content of approximately 6 g% is the DHA status at which intrauterine DHA biomagnifications turns into bioattenuation and postnatal infant DHA equilibrium is reached. Eur. J. Nutr. 2012; 51(6):665-675. [PubMed] Ben-Zvi A, Lacoste B, Kur E, Andreone BJ, Mayshar Y, Yan H,Gu C. Mfsd2a is critical for the formation and function of the blood-brain barrier. Nature 2014;509(7501):507-511. [PubMed] Croset M, Brossard N, Polette A, Lagarde M. Characterization of plasma unsaturated lysophosphatidylcholines in human and rat. Biochem. J. 2000;345(1):61-67. [PubMed] (Open Access) Lagarde M, Bernoud N, Brossard N, Lemaitre-Delaunay D, Thiès F, Croset M, Lecerf J. Lysophosphatidylcholine as a preferred carrier form of docosahexaenoic acid to the brain. J. Mol. Neurosci. 2001;16(2-3):201-204. [PubMed] Rapoport SI, Chang MC, Spector AA. Delivery and turnover of plasma-derived essential PUFAs in mammalian brain. J. Lipid Res. 2001;42(5):678-685. [PubMed] (Open Access) Su HM. Mechanisms of n-3 fatty acid-mediated development and maintenance of learning memory performance. J. Nutr. Biochem. 2010;21(5):364-373. [PubMed] Thies F, Pillon C, Moliere P, Lagarde M, Lecerf J. Preferential incorporation of sn-2 lysoPC DHA over unesterified DHA in the young rat brain. Am. J. Physiol. 1994;267(5):R1273-1279. [PubMed]