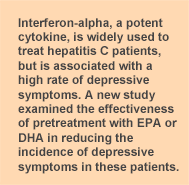 Interferons are a class of cytokines with important immunoregulatory properties, including antiviral and anticarcinogenic effects. They are especially important in the body’s innate immune response to viral infections and are widely used in the primary and adjunct treatment of hepatitis B and C viruses, cancer, such as malignant melanoma and certain leukemias, and in multiple sclerosis. However, their use is associated with several side effects, including neuropsychiatric and depressive symptoms, autoimmunity and slower motor speed. A systematic review of interferon-induced depression in patients with chronic hepatitis C reported that 1 in 4 patients developed a major depressive episode within 24 weeks of treatment. Neuropsychiatric side effects frequently cause patients to discontinue treatment. Antidepressant drug therapy carries its own set of adverse effects, which complicate the treatment of hepatitis C patients. As a result, clinicians have turned to alternative approaches to prevent or reduce depressive symptoms in interferon-alpha-treated patients. Enter long-chain omega-3 PUFAs (n-3 LC-PUFAs). Low dietary intakes and blood levels of n-3 LC-PUFAs have been associated with a higher risk of developing depressive symptoms in observational studies, but their use in the treatment of various depressive disorders has a mixed record. Some studies have reported improved scores on depression rating scales with DHA supplementation as an adjunct to therapeutic counseling. In clinically diagnosed patients with major depressive disorder, treatment with n-3 LC-PUFAs had significant antidepressive effects. It has been suggested that n-3 LC-PUFAs might enhance psychiatric treatments because of their ability to augment medical therapies and the low occurrence of side effects associated with them. Kuan-Pin Su and colleagues at the China Medical University, Taiwan, conducted a randomized, double-blind controlled trial to examine the potential preventive effects of n-3 LC-PUFAs on the development of depressive symptoms in hepatitis C patients being treated with interferon-alpha. Previous work by these investigators had reported significantly lower levels of DHA, but not EPA in red blood cell membranes between depressed and nondepressed patients undergoing interferon-alpha treatment (3.2 ± 0.09 vs. 3.4 ± 0.34%, respectively). With those observations in mind, they designed their study to provide short-term EPA, DHA or placebo supplementation prior to the onset of interferon-alpha treatment in patients with hepatitis C. 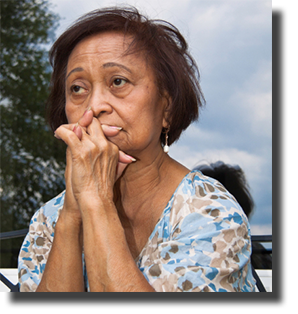 Participants were recruited by hepatologists from the Liver Center of China Medical University Hospital, Taiwan, who determined the eligibility of patients for combination therapy with weekly peginterferon α-2b and daily ribavirin, an antiviral medication. Participants with a previous major depressive episode, a lifetime history of psychotic disorders or alcohol or drug dependence within a year prior to the study, or who had any unstable chronic medical condition were ineligible. Of the 162 patients who were randomized and treated for 2 weeks, 152 completed the 24-week combined drug therapy and were included in the analysis. Participants were 51 years of age, on average, and 48% were male. At randomization, participants were given capsules containing 2.5 g/day of EPA or 1.75 g/day of DHA or 800 mg of high oleic acid oil as a control to consume daily for 2 weeks. After the fatty acid treatment, interferon-alpha treatment began and patients were evaluated at weeks 2, 4, 6, 8, 12, 16, 20 and 24 for the occurrence of any major depressive episode using the Mini-International Neuropsychiatric Interview. The investigators analyzed red blood cell membrane fatty acids at randomization, at the end of n-3 LC-PUFA treatment and at week 24. The primary outcome was the incidence of a major depressive episode at any time during the 24-week post-fatty acid treatment period. The severity of depressive and neurovegetative symptoms (functional impairments such as sleep disorder, loss of interest, hopelessness, inability to concentrate) was assessed using the Hamilton Depression and Neurotoxicity Rating Scales, given at enrollment, the beginning of combination drug treatment and the same times as the clinical patient evaluations. EPA and DHA measurements in the red blood cells after the 2-week intervention showed significant increases in EPA and DHA in the respective treatment groups compared with the values at enrollment. There were no changes in the control group. After 24 weeks, the incidence of a major depressive episode was significantly lower in the patients who consumed the EPA supplement compared with the DHA group and the control (Table). Among all participants, 22% developed an interferon-alpha-induced depressive episode at some point during the 24-week treatment. Those who developed a depressive episode had lower EPA levels at enrollment compared with participants who did not have such an episode (2.0% ± 0.6 vs. 2.5% ± 0.9, P = 0.03).

Pretreatment with either EPA or DHA resulted in a significant delay in the onset of a major depressive episode compared with the control (12 vs. 5 wk). Results from the secondary measures of depressive symptom severity showed increased scores over time for the Hamilton Depression Scale evaluations that peaked at 20 weeks. There were no significant differences among the EPA, DHA and control groups, although those in the EPA group had significantly lower scores at weeks 4 and 8 compared with the DHA and control groups. The Neurotoxicity Scale scores increased markedly over the first 8 weeks and diminished thereafter, remaining significantly higher at 24 weeks than fatty acid or drug treatment baseline values. 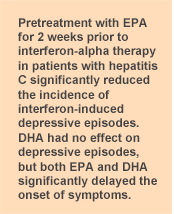 The key finding of this trial was the significant reduction in the incidence of a major depressive episode in hepatitis C patients who were pretreated with EPA for 2 weeks prior to drug therapy with interferon-alpha and ribavirin. Both EPA and DHA led to a significant delay in the onset of symptoms, but only EPA was associated with a lower incidence of depressive episodes. Others have also reported that EPA is more effective than DHA in the treatment of depressive symptoms. A meta-analysis of 15 controlled trials of EPA or EPA + DHA in the treatment of depressive symptoms concluded that supplements containing 60% or more of EPA in treatments using EPA + DHA were more effective than those having a lower proportion of EPA. Randomized controlled trials of n-3 LC-PUFAs in diverse settings seldom yield as clear-cut responses as reported in this study. With confirmation by other investigators, EPA might be on its way to reducing the depressive episodes that occur in a considerable proportion of hepatitis C patients facing challenging drug therapy. Su KP, Lai HC, Yang HT, Su WP, Peng CY, Chang JP, Chang HC, Pariante CM. Omega-3 fatty acids in the prevention of interferon-alpha-induced depression: results from a randomized controlled trial. Biol Psychiatry 2014; Jan. 24. doi: 10.1016/j.biopsych.2014.01.008. [PubMed]