Posted by pufa | April 29, 2015
Immune Function
This article at a glance   Auto-immune diseases place a significant burden on society since they are chronic, affect a substantial percentage of the population (approximately 8%), and are rising in prevalence. Crohn’s disease, lupus, ulcerative colitis, multiple sclerosis, rheumatoid arthritis, psoriasis and scleroderma are some of the most common and known autoimmune diseases. For many autoimmune disorders women are affected proportionally more frequently than men. A collection of over one hundred different autoimmune disorders are now recognized. These are often, but not always, characterized by humoral antibody-mediated reactions towards some endogenous tissue component, and vary widely in etiologies and clinical manifestations. Precisely why tolerance to self-antigens breaks down in various autoimmune diseases is the subject of much current research.

Vasculitis refers to inflammation of the vasculature, and is composed of an array of manifestations that can be caused by infections and by autoimmune reactions. A classification of the various types of vasculitis that is suitable for clinical diagnosis has proven difficult to achieve given the different types and overlapping manifestations, and is still in development. In several forms of autoimmune vasculitis, antibodies are present that are known to react with specific proteins located intracellularly within neutrophils. The antineutrophil-cytoplasmic-autoantibodies (ANCA)-auto-antibodies stimulate various arms of the immune system to amplify an inflammatory response that leads to extravascular granulomatous inflammation. ANCA-associated vasculitides (AAV) are relatively rare autoimmune disorders with an estimated incidence of 10 to 20 cases per million per year, affecting mostly elderly people. Treatment of AAV is based on the use of glucocorticoids, methotrexate, azathioprine, cyclophosphamide, and plasma exchanges, which allow the disease to present itself as a relapsing-remitting condition instead of a progressive and fatal inflammatory disorder. A major need for further improvements in the treatment of AAV, and auto-immune disease in general, exists given the marked side effects of currently available pharmacological approaches to control AAV. A recent anecdotal description of two cases has proposed the hypothesis that adding eicosapentaenoic acid (EPA) as an adjunct to drug treatment might contribute to control autoimmune disease. The case report by Hirahashi and colleagues from the Department of Nephrology and Endocrinology, University of Tokyo, and several other academic and private laboratories in Japan, reported on two patients. In the first clinical case, a 73-year old man diagnosed with microscopic polyangiitis, a type of autoimmune vasculitis affecting the capillaries, was treated daily with 1.8 g highly purified EPA and a low-dose aspirin in addition to methylprednisolone. The patient remained in remission for five years, during which his methylprednisolone dose was gradually lowered, and no other immunosuppressants were needed. During this period autoantibody titers remained low and he developed no deterioration typically associated with AAV, such as accelerated atherosclerosis or mineral bone disease resulting from chronic kidney disease. In the second clinical case, a 79-year old woman with necrotizing vasculitis of the small vessels of the kidney, high titers of autoantibodies, and elevated C-reactive protein, was placed on methylprednisolone therapy to induce remission and treated with 1.8 g/day highly purified EPA and low-dose aspirin. Methylprednisolone was gradually decreased and the patient maintained remission of AAV for more than five years without recurrence of adverse events. In both cases, after several weeks of induction of remission, the autoantibody titers and CRP levels in blood had decreased to a low level, and were shown to remain low for at least one year. 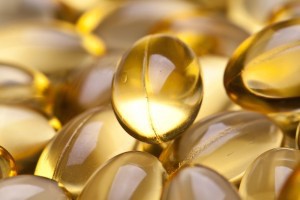 The study next explored potential mechanisms by which EPA might affect remission using a mouse model for AAV. The SCG/Kj mice employed for this research spontaneously develop small-vessel vasculitis, produce autoantibodies against myeloperoxidase (a neutrophil protein) and develop glomerulonephritis that ultimately leads to renal failure after 2-3 months. Feeding the mice a diet containing 5% EPA led to a significantly increased life-span compared to mice eating a normal rodent diet or one supplemented with 5% corn oil. Measurement of tissue levels of PUFA showed that EPA levels were significantly increased in kidney, lung, spleen, and in plasma, whereas arachidonic acid (AA) levels had decreased. There was no change in DHA content. An exhaustive analysis of polyunsaturated fatty acid-derived lipid mediators in these tissues revealed the formation of the anti-inflammatory substances 18-HEPE, resolvin E2 and 17,18-EpETE, all formed from EPA, as well as marked decreases in several AA-derived eicosanoids that have been associated with inflammation. Appearance of blood in urine was nearly abolished in EPA-treated mice, and blood urea nitrogen levels and auto-antibody titers significantly decreased. No measurable effect on proteinuria or serum creatinine levels was found. The beneficial effects of EPA on the kidneys were confirmed by histological analysis showing reduced glomerulonephritis, and less endothelial cell damage in the glomeruli and peritubular capillaries. Analysis of lymph nodes of EPA-treated mice revealed lower numbers of mature T-cells and double negative (CD4-/CD8-) CD220+ T cells in draining lymph nodes, as well as an increased number of regulatory T cells that may play a role in counteracting the autoimmune response.