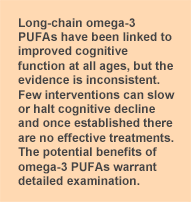 Positive links between DHA, long-chain omega-3 PUFA (n-3 LC-PUFA) status or intake and LC-PUFA supplementation and cognitive function have been reported in infants, children, adults and the elderly, but the literature is inconsistent and effects have usually been small. Several, but not all, studies have reported a reduced risk of mild cognitive impairment with higher intakes or blood levels of n-3 LC-PUFAs, sometimes, but not always, a forerunner of dementia. Few interventions can slow or halt the decline of cognitive function with aging, and none has been shown to improve moderate or severe cognitive impairment. Ideally, interventions should be preventive, implemented before clinical or physical signs of cognitive decline appear. With limited available strategies, those with potential benefits warrant detailed examination before they can be definitively excluded. This category includes n-3 LC-PUFAs. A review of n-3 LC-PUFA supplementation studies in animals suggested that many studies have been too short and that long-term studies were more likely to show a benefit from increased n-3 LC-PUFA consumption. One 24-week study in cognitively normal healthy adults 55 years of age or more reported that moderate DHA supplementation (900 mg/day) was associated with improved learning and memory function. However, an 18-month study among participants with mild to moderate Alzheimer’s disease who consumed 2 g of DHA per day reported no change in the rate of cognitive decline. With such uncertain data, investigators at the Charité-Universitätsmedizin Berlin, Germany, conducted a randomized controlled trial of n-3 LC-PUFA supplementation in cognitively normal healthy adults with a mean age of 64 years.

Participants recruited from the general public in Berlin were eligible if they did not have type 2 diabetes, neurological disorders, psychiatric medication, a Mini-Mental State Examination score <26 points, body mass index outside the range of 25 to 30 kg/m2 and several other less desirable lifestyle characteristics. Participants underwent medical examination, neuropsychological testing, structural magnetic resonance imaging of the brain, and assessments of vascular markers, clinical and lipid measurements in blood, including brain-derived neurotrophic factor and three inflammatory markers, and anthropometry at baseline and after 26 weeks. Eighty participants were randomized to consume either 2.2 g/day of EPA + DHA from fish oil or a sunflower oil placebo for 26 weeks. Sixty-five participants completed the study. Tests for cognitive function included verbal fluency; trail making test for visual attention and task switching; Stroop Color-Word test, which assesses reaction time for a task; auditory verbal learning; forward and backward digit spans and a 15-word immediate and delayed recall test. The investigators compiled and averaged composite scores from these tests to obtain primary outcome measures of executive function and memory performance. Other outcomes were sensorimotor speed and attention. Each participant underwent a 3-dimensional scanning protocol using magnetic resonance imaging. Images were used to derive voxel-wise analysis of changes in the microstructure of regional white matter and gray matter volume (Figure). The researchers calculated the omega-3 index from the concentrations of EPA and DHA in red blood cell membranes. 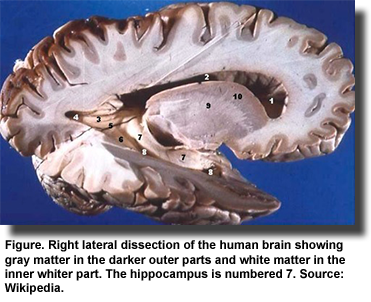 After 26 weeks, the investigators observed a significant interaction between the two groups and time on the performance of executive function. With n-3 LC-PUFA supplementation, executive functions were enhanced by 26%, but did not change in the placebo group. Memory and sensorimotor tests did not differ between the groups, but both were affected by a significant effect of retesting. There were no group effects for attention. Some cardiovascular parameters improved with n-3 LC-PUFA supplementation, including significant reductions in triglycerides, the pro-inflammatory mediators TNF-α and interleukin-6, while the level of brain-derived neurotrophic factor increased in both groups. The investigators also noted similar significant changes in the inflammatory mediators and brain-derived neurotrophic factor in the placebo group. Analysis of voxel-wise changes in cortical white matter integrity at 26 weeks showed that n-3 LC-PUFA supplementation was associated with significant changes indicative of superior white matter integrity within selective white matter tracts in the left and right hemispheres. Similarly, the n-3 LC-PUFA supplemented group had significant increases in regional gray matter volumes compared with the placebo group in the left hippocampus, precuneus and other locations. Placebo participants exhibited a significant loss of total gray matter volume over the study, whereas supplemented individuals did not. Others have reported an association between higher consumption of EPA and DHA and global gray matter volume in 75-year-old individuals. An association between reduced gray matter and lower scores for executive function was also described previously. 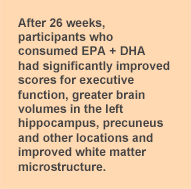 The investigators also reported several significant associations in the n-3 LC-PUFA-supplemented group with improved executive functions, including higher omega-3 index, increased brain-derived neurotrophic factor and lower fasting insulin levels. They did not observe any significant improvements with n-3 LC-PUFA supplementation on memory scores, although others have reported memory improvements with n-3 LC-PUFAs or DHA supplementation. Interpretations of these associations, however, require caution. These findings provide additional evidence that healthy older adults who consume moderately high levels of EPA + DHA experience better maintenance of brain structure and improved executive function. Although only one of the several assessments of cognitive function, executive function, was significantly improved with supplementation, it may be that the changes in white matter microstructure and gray matter volume are more important for the prevention of cognitive decline.

Several studies have reported associations between n-3 LC-PUFAs and changes in brain structure or volume, including lower red blood cell n-3 LC-PUFAs and accelerated aging and smaller brain volumes; higher n-3 LC-PUFA intakes and greater gray matter volumes in the anterior cingulate cortex, right amygdala and right hippocampus; higher plasma EPA, but not DHA, and less gray matter atrophy in the right amygdala; and reduced gray matter DHA content in a healthy aged brain. It has also been reported that individuals with amnestic (mild or total memory loss) mild cognitive impairment have significantly smaller hippocampi, a characteristic of Alzheimer’s disease pathology. In this study, changes in 3 aspects of the brain neuroimaging voxel data were considered reflective of higher myelination, increased fiber packing density and reduced axonal damage, suggestive of improved brain microstructure in regions associated with executive function. This interpretation is consistent with a report that injection into brain of either DHA or EPA increased the expression of specific myelin proteins in vivo in rats. The observation that higher hippocampal brain-derived neurotrophic factor levels occurred with n-3 LC-PUFA supplementation is consistent with a similar finding that n-3 LC-PUFAs restored this neurotrophic factor in animals with traumatic brain injury. The link between higher brain-derived neurotrophic factor levels and hippocampal volume, however, is also affected by certain gene variants, which suggests caution in the interpretation of this relationship. Even though regional brain volumes, especially of the hippocampus, usually decrease significantly with time, consumption of n-3 LC-PUFAs appears to protect brain volumes. Lest one think these relationships might be straightforward, executive function and prefrontal cortex volume appear to be inter-related through aerobic fitness. It appears there may be many ways to keep our brains in shape.   Witte AV, Kerti L, Hermannstädter HM, Fiebach JB, Schreiber SJ, Schuchardt JP, Hahn A, Flöel A. Long-chain omega-3 fatty acids improve brain function and structure in older adults. Cereb Cortex 2013; June 24. [PubMed]