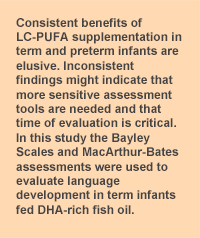 Although the need for sufficient long-chain PUFAs to meet the postnatal developmental needs of pre- and term infants is well recognized, trials aimed at demonstrating the neurodevelopmental benefits of providing infants with abundant LC-PUFAs are inconclusive. For example, preterm infants fed 1% DHA from day 2 to 4 of life until term corrected age did not have increased Bayley Mental Development Index scores at 18 months corrected age, but in subgroup analysis, girls’ scores were higher. A recent meta-analysis of 12 trials using LC-PUFA-supplemented infant formula found no significant effect on early infant cognition at about 1 year of age in term or preterm infants. Although effects on growth appear minimal, some studies have reported better psychomotor development at 30 months of age and improved attention span at 5 years in children whose mothers consumed a modest supplement of DHA and breastfed their children. Several randomized controlled trials have reported significant benefits in visual acuity among infants fed formula containing at least 0.36% DHA and 0.72% ARA for 12 months and some have reported improved cognitive outcomes with LC-PUFA supplementation. Maternal supplementation with LC-PUFAs during pregnancy has also been associated with improved global neurodevelopment performance in the offspring. Some have argued that supplementation has been too low, developmental assessments insufficiently sensitive or inappropriate for the age of measurement or interventions have been too short. It has also been more difficult to demonstrate benefits in healthy term infants who usually have sufficient LC-PUFAs from placental transfer compared with preterm infants who face shortfalls in these nutrients. With these considerations in mind, Suzanne Meldrum and colleagues at the University of Western Australia conducted a randomized controlled trial of high-dose DHA-enriched fish oil supplementation for 6 months in 420 healthy term infants. The investigators evaluated infant plasma and erythrocyte fatty acids at birth and 6 months of age, language development at 12 and 18 months and neurodevelopment at 18 months. Breast milk samples were collected and analyzed for fatty acids at 3 and 6 months after delivery. Pregnant women with a history of allergy were recruited for the study, with exclusions for fish oil supplementation of 1 g/day or more, eating more than 3 fish meals/week, pre-existing medical conditions or high-risk pregnancy or preterm delivery. Infants were randomized to receive 250 to 280 mg DHA/day from high-dose DHA ethyl ester-enriched fish oil supplements or the equivalent amount of olive oil placebo from birth until 6 months of age. The enriched fish oil supplement contained 280 mg DHA and 110 mg EPA and was intended to be a high dose. Capsules were given in the morning either in the formula or directly into the infant’s mouth by squirting out the capsule contents. The MacArthur-Bates Communicative Development Inventories were used to assess the infants’ words and gestures at 12 and 18 months of age. Infants were also assessed at 18 months using the Bayley Scales of Infant and Toddler Development-III, which has subscales for language development, and the Achenbach Child Behavior Checklist for mental health and behavioral development. 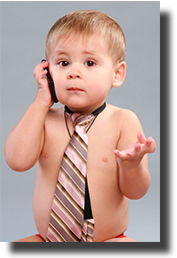 Of the 420 participants randomized at baseline, 287 infants completed the study, with dropouts more frequent in the fish oil group, due to the smell of the oil. Adherence was included in the analysis as a confounding variable. At 6 months, erythrocyte and plasma phospholipid DHA concentrations were higher in infants consuming the fish oil, while ARA showed no change in plasma phospholipid and was and was significantly lower in erythrocytes . EPA levels were significantly higher only in the erythrocytes. There were no significant differences between the treatment groups for the standard or composite scores on the Bayley test at 18 months. Scores for the Child Behavior Checklist categories were analyzed as two groups, either above or below a T-score of 50 because scores were skewed. Higher scores for fish-oil-supplemented children were observed only for anxious or depressed behavior (47.6 vs 33.4, P = 0.02). This unexpected observation eludes explanation. In spite of having fewer completed assessments at 12 and 18 months, children in the fish oil group had significantly better gesture communication compared with the placebo toddlers, as assessed by the MacArthur-Bates Communicative Development Inventories. Whether the scores were expressed as raw scores or percentile rank, total and later gestures were consistently better at 12 and 18 months in the fish oil group (Table). Scores for phrases and words understood and spoken were nearly always higher in the fish oil children, although these scores were not significantly different from the placebo group, in part because of the wide variation in scores. Interestingly, the language subscales on the Bayley Scales of Infant and Toddler Development, 3rd edition, did not differ significantly between the two groups. However, the MacArthur-Bates Communication evaluation revealed no between-group difference in words and phrases spoken or understood, yet detected significant differences favoring the fish oil infants in later and total gestures. These differences may suggest that the latter assessment is better suited to evaluate language development. 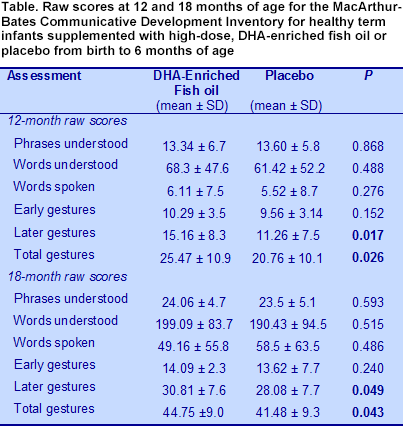 Previous reports of the associations between n-3 LC-PUFA supplementation and language development have been mixed, with recommendations that tools more sensitive than global developmental scores be used. For example, a recent study of DHA supplementation of pregnant women reported that 18-month-old girls from the supplemented mothers had lower mean language scores and a higher risk of delayed language development compared with boys. This study used the recent third edition of the Bayley Scales to assess language development. In another study, preterm infants fed 3 times the standard amount of DHA after birth showed no change in language development in early childhood. Others reported lower parent-assessed vocabulary scores at 14 months of age in children consuming a DHA-supplemented formula without ARA compared with those receiving unsupplemented formula or those who were breastfed, but the differences were not detectable at 39 months of age, using age-appropriate tests. Higher scores for later and total gestures in the DHA