Posted by pufa | December 18, 2014
Prenatal & Infant Health
Since omega-3 fatty acids are known to have anti-inflammatory activity, and allergic disease is typified by the active release of inflammatory mediators, several studies have investigated whether omega-3 fatty acid intake can lower the incidence of allergies. Within this line of thought, clinical researchers have investigated the possibility that the omega-3 status of the mother during pregnancy affects the incidence of allergic reactions in her offspring. This refers to eczema, asthma, and rhinitis, with symptoms including bronchial hyper-responsiveness (wheezing and difficulty breathing), coughing, irritated skin and rash, and nasal discharge. Atopy is the collective description of a heritable portion of allergies, and is linked to the spontaneous increased production of one type of antibodies called immunoglobulins type E (IgE), which bind to allergens and trigger mast cell-mediated inflammatory responses. Heritability is important, but does not follow a simple model; it is likely that multiple genetic traits contribute to increased total IgE as well as allergen-specific antibodies. Increased IgE predisposes to allergic reactions, with illness from the respiratory symptoms of atopy being particularly disabling for the infants and a burden for the families. Studies which have investigated the effect of an increased intake of EPA/DHA or fish oils containing long chain omega-3s, or the importance of omega-3 status of the expecting mother, on the incidence of allergic disorders in the offspring have produced equivocal results.

A research group led by Dr. Isabelle Romieu from the National Institute of Public Health (INSP) in Cuernavaca, Mexico, in collaboration with the World Health Organization and the International Agency for Research in Cancer in Lyon, France, has now reported the results of a double-blind, randomized, placebo-controlled trial in pregnant women who received a modest daily dose of DHA during the second pregnancy trimester and whose children were monitored for respiratory symptoms. This study is part of an ongoing collaborative effort between the INSP in Cuernavaca, and Emory University in Atlanta, USA, and is called the Prenatal DHA (n-3) Fatty Acid Supplements on Infant Growth and Development (POSGRAO) Study. The women were aged 18 to 35 years and received supplemental DHA between 18 and 22 weeks of gestation. In total 1094 eligible pregnant women were recruited from the Mexican Social Security Institute hospital system. As specific eligibility criteria the women were asked to breastfeed for three months after birth and indicate their intent to remain in their area of current residence for two years after delivery. Women with high-risk pregnancies, lipid absorption disorders, or who regularly consumed fish oil or DHA supplements or certain medications, were not eligible for the trial. 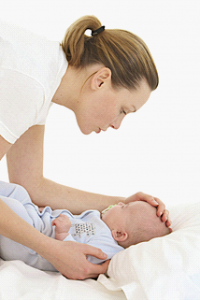 The women were randomly assigned to one of two groups. Women in the first group received 400 mg of DHA (in two capsules) daily during weeks 18 to 22 of gestation, whereas those in the second group received a placebo composed of a blend of corn oil and soybean oil. There were no notable differences in baseline characteristics of the mothers in the treatment groups. Over half of all the women were overweight (59%) and 32.6% of mothers were atopic. Median intake of dietary omega-3 fatty acids prior to entry into the trial was low at 55 mg/day. The changes in fatty acid status of plasma and breast milk in the DHA-supplemented and control groups have previously been reported; small and statistically significant increases in plasma DHA and total omega-3 level were achieved by the 5-week DHA-supplementation, as well as increased levels of DHA and alpha-linolenic acid in breast milk at one month post-partum. Furthermore, there were no significant differences in baseline dietary intake and intake of individual fatty acids between the two groups. It is important to note that basal DHA level in plasma (1.3% of all fatty acids) was relatively low, even after supplementation (1.7%). The DHA level in breast milk, even after supplementation, also remained relatively low (0.22% of all fatty acids). After delivery, the children were monitored every month up to 12 months and again at 18 months of age. Information on the presence or absence of respiratory signs and symptoms, as well as the number and duration of episodes, was determined using a clinical questionnaire. The following variables were scored: i) coughing, ii) wheezing, iii) difficulty breathing, iv) wheezing and difficulty breathing, v) coughing with wheezing and/or difficult breathing, vi) coughing with phlegm, vii) phlegm, nasal discharge, and/or stuffy nose, viii) fever with phlegm and nasal discharge or nasal congestion, ix) coughing with fever, and x) wheezing with fever. Maternal atopy was determined by measurement of IgE levels in plasma. A cut-off level of > 70 IU/ml was considered indicative of atopic mothers. Additional variables were recorded such as demographics, household characteristics, parents’ education, and environmental exposure to allergens, as well as food consumption and dietary intakes of fatty acids.

The authors point out that it was not possible to distinguish between respiratory symptoms of viral infections and allergic reactions. The same authors previously published that pre-natal supplementation with 400 mg DHA reduced symptoms of colds, such as cough, phlegm, and wheezing in one month old newborns, less time ill in three month olds, and a shorter duration of fever, nasal secretions, difficulty breathing, and rash in six month olds. More precise measurements need to be made if this discrimination of allergies from viral colds in babies is required; for example a combination of the family history of atopy, cord blood IgE, and skin assessment may be a suitable way to identify babies at high risk of allergy. To be able to attribute the observed beneficial effects of DHA to the modulation of allergic respiratory symptoms, this discrimination appears important since previous research has not been able to demonstrate a role for LC omega-3s in the allergic manifestations or lower respiratory tract infections in breast-fed infants. A further methodological limitation was that the questionnaire that was used for scoring symptoms had not been fully validated for Mexican mothers. Using cord blood samples from the same study, the supplementation of pregnant mothers with DHA was shown to change the methylation of specific DNA-sequences in monocytes collected at the time of delivery. That such epigenetic modifications could occur upon changes in the mother-to-fetus supply of an essential fatty acid has long been suspected. Undoubtedly new research will continue to focus on delineating the precise requirements that the developing fetus has for omega-3 fatty acids in relation to specific modulation of regulatory DNA sequences and the development of the immune system. Since atopy is heritable, it is conceivable that epigenetic modulation activated by specific nutrients may contribute to the modulation of atopy, and if understood can be used to lower symptoms associated with allergies. Such studies may ultimately contribute to our understanding why the offspring of non-atopic mothers did not receive a more marked benefit from supplemental DHA with respect to respiratory symptoms. Practical and cost-effective interventions that can reduce the incidence of respiratory symptoms in large groups of newborns are of course of significant relevance to public health. Irrespective of the precise mechanism, the present study indicates that mothers with a history of atopy and low basal intake of omega-3 could consume a modest daily dose of 400 mg DHA in the second trimester of pregnancy to markedly reduce the frequency of respiratory symptoms in their children during the first 18 months of life. That appears to be the case in a region of Mexico, and it is hoped that the results hold for other parts of the world.   Escamilla-Nuñez MC, Barraza-Villarreal A, Hernández-Cadena L, Navarro-Olivos E, Sly PD, Romieu I. Omega-3 fatty acid supplementation during pregnancy and respiratory symptoms in children. Chest 2014;146(2):373-382. [PubMed]   Worth Noting Feijen M, Gerritsen J, Postma DS. Genetics of allergic disease. Br. Med. Bull. 2000;56(4):894-907. [PubMed] Imhoff-Kunsch B, Stein AD, Villalpando S, Martorell R, Ramakrishnan U. Docosahexaenoic acid supplementation from mid-pregnancy to parturition influenced breast milk fatty acid concentrations at 1 month postpartum in Mexican women. J. Nutr. 2011;141(2):321-326. [PubMed] Imhoff-Kunsch B, Stein AD, Martorell R, Parra-Cabrera S, Romieu I, Ramakrishnan U. Prenatal docosahexaenoic acid supplementation and infant morbidity: randomized controlled trial. Pediatrics 2011;128(3):e505-512. [PubMed] Lee HS, Barraza-Villarreal A, Biessy C, Duarte-Salles T, Sly PD, Ramakrishnan U, Rivera J, Herceg Z, Romieu I. Dietary supplementation with polyunsaturated fatty acid during pregnancy modulates DNA methylation at IGF2/H19 imprinted genes and growth of infants. Physiol. Genomics. [PubMed] Morales E, García-Esteban R, Guxens M, Guerra S, Mendez M, Moltó-Puigmartí C, Lopez-Sabater MC, Sunyer J. Effects of prolonged breastfeeding and colostrum fatty acids on allergic manifestations and infections in infancy. Clin. Exp. Allergy 2012;42(6):918-928. [PubMed] Odelram H, Björkstén B, Leander E, Kjellman NI. Predictors of atopy in newborn babies. Allergy 1995;50(7):585-592. [PubMed] Ramakrishnan U, Stein AD, Parra-Cabrera S, Wang M, Imhoff-Kunsch B, Juárez-Márquez S, Rivera J, Martorell R. Effects of docosahexaenoic acid supplementation during pregnancy on gestational age and size at birth: randomized, double-blind, placebo-controlled trial in Mexico. Food Nutr. Bull. 2010;31(2 Suppl):S108-116. [PubMed]