Posted by pufa | August 28, 2014
Cardiovascular Health, Clinical Conditions
Obesity is frequently accompanied by dyslipidemia, consisting of changes in triglyceride (TG) and cholesterol levels in blood outside the ranges considered normal. Many obese subjects have significantly elevated concentrations of cholesterol incorporated in the lipoprotein particle LDL (low-density lipoprotein). Another notable change is an elevated level of the lipoprotein VLDL (very-low density lipoprotein), which carries TG and cholesterol produced in the liver to other parts of the body where these lipids can be used for energy and tissue growth. Whereas countless studies have been dedicated to understanding the potential role of cholesterol in metabolic disorder and cardiovascular pathologies, and finding means to control its levels, less attention has been focused on the significance of elevated triglycerides. A reappreciation of a role of elevated TG levels in metabolic syndrome and cardiovascular disease may be emerging. Both the overproduction of VLDL-TG and insufficient clearance are considered to contribute to the development of hypertriglyceridemia in obesity. 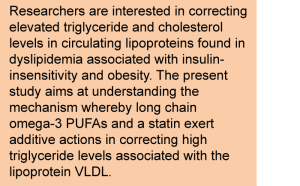 The long chain omega-3 PUFA EPA and DHA exert a measurable influence on lipid metabolism in humans, and a reduction in plasma TG level can be observed relatively rapidly (within a few weeks) when the dietary intake of EPA and DHA is augmented, particularly in people with elevated TG levels. In fact, the efficacy with which long chain omega-3 can lower triglycerides is so convincing that multiple pharmaceuticals containing concentrated EPA and DHA have been approved around the world. The effect is dose- and time-dependent (among other factors, such as purity and molecular form of the employed omega-3 PUFA) and average reductions in TG levels in the order of 30-40% in hypertriglyceridemia can be achieved. Fish oil has been shown to lower TG levels by lowering the assembly and secretion of TG-rich VLDL by the liver into the circulation. Given the changes in levels of both cholesterol and TG in obesity, researchers are interested in correcting these alterations by combining the cholesterol-lowering activities of statins with the TG-lowering action of increased long chain omega-3 intake. Atorvastatin, a widely prescribed statin, has been shown by itself to decrease the level of lipoproteins containing apoB100, corresponding to lipoproteins that carry cholesterol within the circulation (LDL, IDL and VLDL), by promoting their catabolism. The assessment of statin efficacy has led to the recognition that these compounds can also contribute to lowering plasma TG through an action on VLDL formation, alongside their primary function to reduce endogenous cholesterol biosynthesis. Potential benefits for the treatment of hypertriglyceridemia by combining statins with EPA/DHA have been identified in a large review of studies that had looked at the interactions of statins with various dietary supplements. 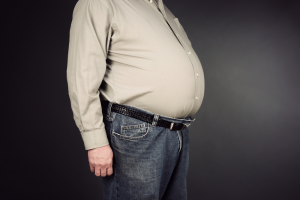 Given the knowledge that both statins and omega-3 PUFAs can lower plasma TG, studies have addressed whether the combination of both has additive effects on plasma TG lowering in the context of obesity. This potentiating action has recently been shown to not be the result of an increased removal of TG-rich lipoprotein particles containing apo C-III. Apo C-III lipoproteins comprise VLDL particles and TG-rich “remnants” (lipoprotein particles which have transferred most of their lipid content to peripheral tissues), which are cleared more slowly from the circulation and levels of which are elevated in obesity and hypertriglyceridemia. Left open to a different interpretation, what mechanism may be responsible for the potentially more efficacious TG-lowering effect when long chain omega-3 supplementation and statin use are combined? The present study by Ng and colleagues at the University of Western Australia, was undertaken to gain further insight into the kinetics of VLDL when atorvastatin treatment is combined with omega-3 supplementation. The research group is well positioned to execute this detailed analysis in humans, relying on many years of experience in studying the precise regulation of lipid metabolism through the labelling of specific lipoproteins, allowing the tracking of temporal changes in response to pharmacologic and dietary intervention. This study is a randomized, double-blind, placebo-controlled intervention trial in obese, normotensive and insulin-resistant middle-age men. After a 2-week run in period, the study subjects were randomly assigned to one of three 6-week treatments; i) atorvastatin (400 mg/d), ii) atorvastatin plus a high dose (4 g/d) EPA/DHA-ethyl ester (EE) concentrate (45% EPA-EE and 39% DHA-EE), and iii) atorvastatin placebo plus corn oil (4 g/d). The compliance for the statin and omega-3 oil was determined by counting of tablets and capsules, respectively. Also the change in plasma lathosterol (the immediate precursor for endogenous cholesterol biosynthesis) and EPA and DHA levels were measured to verify that subjects were following their indicated intervention. Prior to and after the 6 week intervention period, the subjects were admitted to a metabolic ward. After a 14 hour fast, blood samples were taken to measure plasma TG, cholesterol associated with HDL and LDL, total non-HDL cholesterol, apolipoprotein (apo) A-I, apoB-100, apoB-48, remnant-like particle (RLP)-cholesterol, non-esterified fatty acids, insulin, and glucose. Insulin resistance was calculated from fasting glucose and insulin concentrations using the homeostatic model assessment formula. Specifically, VLDL kinetics in blood were determined by measurement of the changes in B-100 concentration using a deuterium-labeled leucine tracer technique permitting the calculation of production and degradation rates of VLDL, IDL and LDL particles. The administration of deuterated glycerol allowed assessment of endogenous synthesis of TG and the determination of the time course of VLDL-associated triglyceride formation and utilization. Through combining a best-fitted model for the changes in VLDL lipoprotein particles, with the tracing of deuterated glycerol incorporated in the plasma VLDL-associated TG and free plasma glycerol, it was possible to measure transport rates of TG in the VLDL lipoprotein pool, consisting of the VLDL-TG production rate and fractional catabolic rate. The measured concentrations of VLDL particles (as VLDL-apoB-100) and VLDL-TG concentrations, as well the production and degradation rates of the VLDL particle and VLDL-TG were used to determine how atorvastatin and omega-3 supplementation decreased TG levels and affected VLDL kinetics. 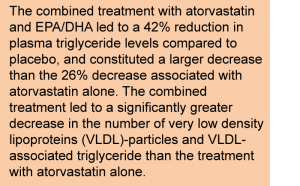 The combined treatment with atorvastatin and EPA/DHA led to a 42% reduction in plasma TGs (P<0.05) compared to placebo, and constituted a larger decrease than the 26% decrease associated with atorvastatin alone (P<0.05). Atorvastatin alone or in combination with omega-3 PUFAs decreased plasma total and non-HDL cholesterol, LDL-cholesterol, RLP-cholesterol, apoB-100, and apoB-48. There was a significant increase in HDL-cholesterol only in the case where atorvastatin and omega-3 PUFAs were given together. It is of importance to note that these observations were made in the context of a significant increase in plasma EPA and DHA concentrations in omega-3 supplemented subjects. Atorvastatin was effective in reducing endogenous cholesterol biosynthesis, as indicated by a reduction in plasma lathosterol concentrations of approximately 75%. With respect to VLDL, the combined treatment of omega-3 and atorvastatin led to a significantly greater decrease in VLDL-TGs than atorvastatin alone. This additional effect on TG levels was due to a decrease in the VLDL-TG production rate. The VLDL-TG fractional catabolic rate that was increased by atorvastatin was not further increased by the concomitant intake of omega-3. In other words, the more effective lowering of plasma TG by omega-3 PUFAs in the context of taking atorvastatin is likely to be mediated by decreasing the synthesis and secretion of VLDL into the circulation (by the liver). The investigators showed good correlations between the decrease in the concentration of VLDL-TG and in VLDL-apoB-100 after atorvastatin plus omega-3 treatment, as well as between the VLDL-TG production rate and VLDL-apoB100 production rate. This reinforces the finding that the TG-lowering action of atorvastatin plus omega-3 PUFAs is mostly related to an effect on the number of VLDL particles formed and secreted into the circulation. 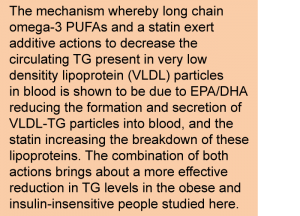