Is breastfeeding linked to the development of infant and childhood allergies? The Canadian Early Childhood Development study reported that infants who were breastfed for more than 3 months were significantly less likely to develop asthma during the preschool years. This study also observed that wheezing before the age of 2 was associated with a higher risk of preschool-age asthma. Reduced risk of asthma in U.S. children who had ever been breastfed was also noted in the NHANES survey, 1988-1994. A study in the Netherlands reported that children who had been breastfed for more than 16 weeks were significantly less likely to develop asthma by the age of 8 than children who were not breastfed. In contrast, a New Zealand study reported that children who were breastfed were more likely to have atopic disease or current asthma at ages 9 to 26 years. A cluster randomized trail in Belarus observed no protective effect of exclusive breastfeeding for 3 months on the risk of allergic symptoms at age 6. Still others reported that longer breastfeeding was associated with decreased airflow at age 16. Wright and colleagues reported that breastfeeding was associated with a higher risk of asthma and recurrent wheeze from the age of 6, but only in atopic children whose mothers were asthmatic. Once more, we face conflicting data. Human milk contains various substances that modify immune function, as has been reviewed. Examples include Toll-like receptors, maternal antibodies, cytokines and innate antimicrobial factors, such as lysozyme and immunoglobulins. Several immune markers in breast milk have been associated with higher or lower risk of asthmatic symptoms in infants. The PUFAs in milk also influence the development of the infant’s immune system and might account for some of the links between breastfeeding and the risk of allergic disease. Whether the PUFA profile or the immunological components in breast milk are associated with the risk of wheeze and asthma in children at high risk of allergic diseases has not been determined. Indirect evidence for the effect of fish consumption, a proxy for higher intakes of n-3 LC-PUFAs, suggest that PUFAs are involved. The protective effect of eating fatty fish on bronchial hyperresponsiveness was reported in a 1992 observational study in Australia. A subsequent study reported that children with recent wheeze who ate fresh oily fish had a significantly lower risk of childhood asthma. A case-control study reported that the offspring of mothers with a history of asthma who consumed fatty fish at least monthly during pregnancy were significantly less likely to develop asthma by the age of 5 compared with mothers who did not eat oily fish. In another study, the offspring of mothers who consumed fish oil during pregnancy were significantly less likely to be diagnosed with allergic asthma at 16 years of age compared with children whose mothers consumed the olive oil placebo. On the other hand, childhood diets high in linoleic acid were associated with an increased risk of asthma at 6 to 15 years of age. Little is known about the relationship between breast milk PUFAs and the risk of asthma in children. 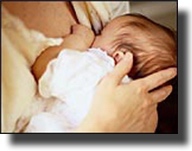 This question was addressed in a U.S. study on the relationship between breast milk fatty acids and the risk of atopic disease and asthma in the offspring at 6 and 12 months of age. Pregnant women (n = 115) from two cities in South Carolina, U.S., were recruited into the study. Eligible participants were at least 18 years of age, free from chronic illness, willing to provide breast milk 2 weeks after delivery and planning to stay in the area for at least the next 9 months. Selection did not include a history of allergy symptoms or disease. Sixty-eight percent of the sample was Caucasian. Baseline demographic and medical history data were collected prior to delivery and at 2 weeks, 6 and 12 months after delivery. History of allergic symptoms was obtained by telephone interview using structured questions. Post-delivery interviews ascertained breastfeeding duration, medical and respiratory infections in the offspring and doctor’s diagnosis of respiratory disease or middle ear infection. Skin prick tests evaluated sensitization to 6 allergens in a sample of children (46/78). Breast milk fatty acids were measured in 78 of the 115 women approximately 2 weeks after delivery, with 33 providing colostrum samples after 2 days. The investigators reported symptoms of asthma in 71 infants at 6 months of age and 51 at 12 months. Combined asthma symptoms were observed in 15% (11/71) and 20% (10/51) of children at each age, respectively. 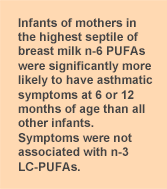 Positive skin prick tests were determined in 16 of the 46 children (35%) who were evaluated. Breast milk fatty acid concentrations from 78 women were expressed on the basis of wet weight (nmol/mg) and total fat. Fatty acids in colostrum and 2-week breast milk were highly correlated. Total n-6 and n-3 PUFAs were not associated with risk of asthma symptoms. With n-3 PUFA concentrations controlled, the highest septile of n-6 PUFAs compared with the first six septiles combined and total n-6 PUFAs were each associated with a 3-fold increase in the relative risk of asthmatic symptoms at 6 or 12 months of age (Table). The statistical model was adjusted for the child’s sex; maternal age, race and smoking status; vaginal or urinary infection; maternal history of asthma and 4 other confounders. For individual fatty acids, only arachidonic acid was associated with an increased risk of asthmatic symptoms in the children. 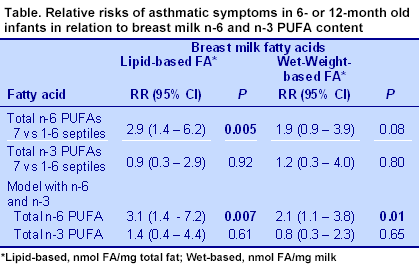 With regard to the skin prick tests, higher total and individual breast milk n-3 LC-PUFAs were significantly associated with a reduced risk of a positive test in 12-month-old infants in confounder-adjusted analysis. Higher breast milk total n-6 PUFAs were not associated with allergen sensitization, with the exception of a lower risk when fatty acids were measured on a wet basis. The key observation in this study was the association between high levels of n-6 PUFAs in breast milk and the risk of asthmatic symptoms in infants at 6 or 12 months of age. In spite of the relatively small number of participants and the fact that they were not selected on the basis of risk of allergic disease or family history of asthma, the investigators observed a significantly higher risk of asthmatic symptoms in the infants of mothers with the highest levels of n-6 PUFAs in their breast milk.