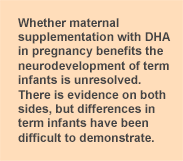 One of the most important reasons to assure the adequate intake of long-chain omega-3 PUFAs (n-3 LC-PUFAs) during pregnancy and early infancy is the importance of these fatty acids, especially DHA, in the structural and functional development of the brain. Although DHA is found in cell membranes throughout the brain, it is especially concentrated in the hippocampus, basal ganglia and frontal lobes, which are involved in cognition and executive functions. Animals and humans fed diets deficient in n-3 PUFAs during fetal and early postnatal life experience significantly reduced content of DHA in their cerebral cortex and retina compared with those fed adequate n-3 PUFAs. Suboptimal dietary and brain DHA contents have been linked to poorer performance on visual attention, cognitive and behavioral tests, although data are inconsistent, especially in term infants. Data from DHA-deficient animals have described various behavioral and cognitive deficits linked to lower DHA levels in the frontal cortex. In addition, n-3 PUFA-deficient animals display deficits in neuronal and behavioral plasticity that carry over into adulthood. One of the challenges in evaluating cognitive and behavioral performance in humans is the selection of assessment measures. Tools that reflect global cognitive function may be insufficiently sensitive for capturing specific brain and executive functions in young children. For this reason, measurement of attention is one aspect that has gained acceptance as a reflection of frontal lobe and hippocampus function and has been linked to maternal DHA status. A recent report describes the effects of maternal n-3 LC-PUFA supplementation in pregnancy and the performance of executive functions in the 2-year-old offspring. Participants in this analysis were part of a larger randomized controlled trial, DHA for Maternal and Infant Outcomes. The investigators recruited 185 participants when the offspring turned 2 years of age, selecting from those who had not been born preterm, with low birthweight or neurologic or visual pathologies. Pregnant women were originally recruited into the study before 21 weeks’ gestation and had consumed 800 mg of DHA with 100 mg of EPA per day or a blended oil placebo from enrollment until delivery. A total of 158 children completed the assessments. They were 27 months of age, on average, at the time of testing. 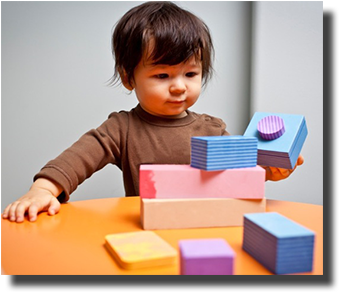 The primary outcomes were the children’s looking times on measures of attention and the accuracy of locating a hidden figure on the working memory and inhibitory control assessment. Attention was evaluated using 3 tasks: single-object sustained attention, multiple object attention to one item and a distractibility task involving sustained attention to one object in the presences of a distracting stimulus. Each child’s responses were video recorded. To assess working memory and inhibitory control, the investigators used a lentil-box version of the A-not-B task described by Spencer et al. and explained fully in the study publication. The results of all the attention tests showed no differences between the offspring of treatment and control mothers. The investigators noted that the latency for distraction increased across the distractibility trials, suggesting a learning effect. This observation did not differ between the groups. In the working memory assessment, the accuracy of finding the toy did not differ between the two groups. The investigators noted that control children were more accurate in searching for the hidden toy during training trials than treatment children, but this difference did not appear during test conditions.