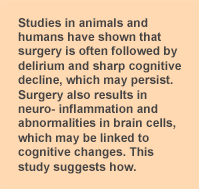 Animal and human studies have demonstrated that, in the metabolic syndrome or elderly patients with an acute illness, those who undergo surgery often experience a surgery-induced sharp decline in cognition. Similar impairments have been observed in patients with severe infection, chemotherapy, trauma and heart failure, with cognitive improvements more likely with cardiac treatment. Cognitive decline is also associated with postoperative delirium and may lead to prolonged impairment. Post-surgical cognitive dysfunction is also associated with an increased risk of mortality. The effect of anesthesia alone on cognition may be difficult to separate from surgical effects, but is known to modulate neuronal development and function and may contribute to detrimental behavioral outcomes. Particular anesthetic agents may affect memory processes in different regions of the brain.  For example, isoflurane with buprenorphine resulted in impaired neocortex-dependent memory, but not hippocampus-dependent memory in the mouse. Surgery is also accompanied by systemic inflammation, which triggers impaired memory and the production of TNF-alpha and IL-1beta-mediated inflammatory effects in the hippocampus of mice. Enhancing the resolution of these immune responses by stimulating nicotinic acetylcholine receptors prevented post-operative cognitive decline in mice with a surgical fracture. These findings suggest that the impaired cognition observed in human patients after surgery might result from neuroinflammation. Another inflammation-resolving molecule being intensively investigated is resolvin D1, a derivative of DHA. Resolvin D1 and its more stable isomer 17R-RvD1 (AT-RvD1) are potent anti-inflammatory substances. The investigators in this study aimed to learn whether pretreatment with AT-RvD1 immediately prior to surgery would counteract the deleterious effects of neuroinflammation on postoperative cognitive decline. 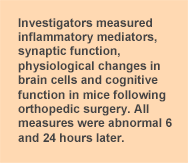 Using an established model of tibia fracture in mice, Niccolò Terrando and colleagues at the Karolinska Institutet, Stockholm, Sweden, compared animals injected with AT-RvD1 before skin incision with animals injected 24 hours after surgery and control mice given only analgesia and a bolus dose of 0.14% alcohol in saline, equivalent in volume to the treatment. They assessed immune responses 6 and 24 hours after surgery by measuring the cytokine IL-6 and lipoxin A4 (a derivative of arachidonic acid involved in the resolution of inflammation) in plasma and the production of superoxide and TNF-alpha by lipopolysaccharide-treated macrophages in vitro. Freeze-mounted brains were fixed in embedding medium and coronal hippocampal sections taken for staining, confocal microscopy and measurement of the area of the astrocytes. The researchers also conducted behavioral studies 3 days after surgery using fear-conditioned animals and measurements of how long movement ceased (freeze behavior) when the animals were presented with the aversive stimulus. This method is called trace fear conditioning. At 6 hours after surgery, plasma IL-6 concentrations were significantly elevated in the mice not treated until 24 hours after surgery, but were significantly reduced by approximately 50% in those treated with AT-RvD1. After 24 hours, IL-6 levels in the treated mice were similar to the controls, but remained significantly elevated in the untreated animals. At 24 hours, lipoxin A4 levels were significantly higher in the delayed-treatment mice than in controls or the treated mice. Treatment of macrophages with lipopolysaccharide stimulated the production of superoxide after 6 hours at a level approximately 75% greater than in the controls. Incubation of the cells with AT-RvD1 and lipopolysaccharide reduced superoxide levels to control levels. AT-RvD1 treatment alone did not affect superoxide production. Similarly, AT-RvD1 attenuated the production of TNF-alpha by macrophages following stimulation with lipopolysaccharide. Histological analysis of the hippocampal sections showed that surgery resulted in atrophied astroglial cells, which had shorter processes and reduced cell area. Treatment with AT-RvD1 restored the typical cell shape and prevented the loss of cell area. The investigators also examined glutamate-responsive synaptic transmission and plasticity, and long-term potentiation in the hippocampal slices. These experiments will not be described in detail beyond reporting the main findings. AT-RvD1 treatment prevented the abnormalities in hippocampal synaptic transmission and plasticity observed after surgery. Long-term potentiation was significantly reduced 24 and 72 hours after surgery, but treatment with AT-RvD1 completely reversed this deficit. 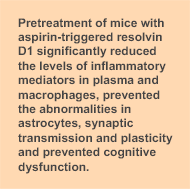 The effect of surgery and AT-RvD1 treatment on memory and cognitive decline was reflected in how the fear-conditioned animals responded to the aversive stimulus 3 days after surgery. Approximately 70% of the control animals responded to the stimulus with typical freezing behavior, whereas only a little more than 40% of those given the delayed treatment responded. Animals treated with AT-RvD1 with or without surgery exhibited freezing behavior no different from the control animals. Thus, AT-RvD1 treatment prevented the cognitive abnormality seen with surgery alone. This study has shown that surgery-induced neuroinflammation affects neuronal function, reduces synaptic transmission, plasticity and long-term potentiation and induces cognitive dysfunction. Preoperative treatment with AT-RvD1, which has potent anti-inflammatory properties, prevented the disordered synaptic transmission and cognitive dysfunction associated with surgery. The investigators demonstrated that the effects of surgery targeted hippocampal astrocytes, resulting in their atrophy and distorted morphology. These cells regulate neurotransmitter levels at the synapse, mediate cholinergic synaptic plasticity, directly affect synaptic function and prevent neuronal cell death. Although microglia can produce 17R-hydroxydocosahexaenoic acid, the authors speculate that aspirin may jump-start the resolution of inflammation by generating AT-RvD1 and thereby have therapeutic implications. Resolvins, including RvD1, have also been reported to reduce inflammatory pain through central and peripheral mechanisms. Resolvins may hold promise for reducing cognitive decline quite apart from that linked to surgery.   Terrando N, Gómez-Galán M, Yang T, Carlström M, Gustavsson D, Harding RE, Lindskog M, Eriksson LI. Aspirin-triggered resolvin D1 prevents surgery-induced cognitive decline. FASEB J 2013; May 24. [PubMed] [Epub ahead of print]