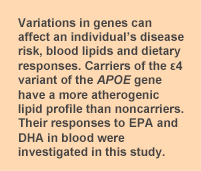 Changes in blood lipids in response to the consumption of long-chain n-3 PUFAs (n-3 LC-PUFAs) have been well studied in healthy and high-risk cardiovascular patients. Responses include significant reductions in triglycerides, especially in those with elevated levels, and increased high-density lipoprotein cholesterol (HDL-C) concentrations. Effects on low-density lipoprotein cholesterol (LDL-C) levels have been inconsistent, with small increases reported most frequently. EPA and DHA may affect blood lipids differently, with DHA more strongly associated with lower triglycerides and higher HDL-C and LDL-C levels compared with EPA. However, in studies with purified EPA and DHA, both fatty acids reduced triglycerides similarly, while DHA increased HDL(2)-C significantly, increased LDL-C by 8% and increased its particle size. EPA did not affect LDL particle size. The overall effect of n-3 LC-PUFAs is generally considered to favor a lower cardiovascular disease risk. Besides the effects on blood lipids, higher intakes of n-3 LC-PUFAs and fish are associated with anti-thrombotic, anti-inflammatory and anti-arrhythmic effects plus improved vascular function and other benefits. One factor that affects an individual’s response to n-3 LC-PUFAs is the ε4 variant of the APOE gene. Best known for its association with an increased risk of Alzheimer’s disease, carriers of the ε4 allele have shorter lives, a higher risk of cardiovascular diseases and for coronary events in men, higher levels of LDL-C and total cholesterol and lower levels of HDL-C. Intriguingly, they also experience a delayed onset of cancers compared with individuals lacking the gene. Evidence suggests that carriers of the gene have a more robust LDL-C-lowering response to reduced saturated fat intake than non-carriers. The effects of fish oil in carriers of the APOE ε4 gene variant have been reported, with carriers exhibiting significant reductions in triglycerides, but increases in total cholesterol and LDL-C and reductions in HDL-C. At baseline, carriers of the ε4 allele differed from non-carriers in significantly lower HDL-C concentrations, but not in triglycerides, total or LDL-C levels. These observations in a small sample of patients with an atherogenic phenotype have now been extended in a larger sample of 2,340 community participants in the Multi-Ethnic Study of Atherosclerosis (MESA). The study examined the lipid, fatty acid and lipoprotein profiles in the plasma phospholipids of participants carrying the APOE gene, of whom approximately 22% carried one ε4 allele and 1.7% had two. Americans of African, Chinese, European and Hispanic heritage, aged 45 to 84 years, were recruited from 6 U.S. communities. Participants were excluded if they had cardiovascular disease, took lipid-lowering drugs or had the APOE ε2/ε4 genotype. Participants differed by APOE genotype in their total, LDL-C and HDL-C concentrations, but not in their triglycerides. Those with at least one ε4 allele had significantly higher total and LDL-C levels and significantly lower HDL-C levels than those with the ε2 allele, while those with the ε3 allele had values intermediate between these groups (Table). The ε4 group also had significantly higher mean concentrations of small LDL particles compared with the ε2 group (621.8 ± 1.6 nmol/L vs 450.3 ± 20.0 nmol/L). These differences are consistent with a more atherogenic lipid profile in the ε4 group and a less atherogenic profile in the ε2 group compared with carriers of both ε3 alleles. Mean levels of EPA and DHA did not differ among the APOE genotypes. 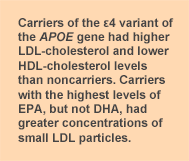 The study confirms that the APOE genotype modifies the association between EPA and plasma lipoprotein concentrations and particle size. The APOE genotype had no effect on plasma triglycerides. This report supports previous findings of a more atherogenic lipid profile in carriers of the ε4 allele. These individuals are more likely to have higher total and LDL-C levels and lower HDL-C concentrations. In addition, ε4-carriers with higher levels of EPA, but not DHA, have greater concentrations of small LDL particles, which are considered more atherogenic. In contrast, carriers of the ε2 allele have a less atherogenic lipid profile with lower LDL-C levels. Carriers of the ε2 allele respond more favorably to higher EPA levels, with higher concentrations of HDL-C and large HDL particles. Plasma DHA was unrelated to most lipoprotein and particle assessments. However, plasma DHA was directly, but not significantly, associated with the concentration of small LDL particles in ε4 carriers, although the association was different from the inverse association observed in the ε2 group. These observations suggest that APOE genotype modifies the association between EPA and plasma HDL-C and LDL-C concentrations and particle size. However, APOE was not related to phospholipid EPA and DHA. Background levels of n-3 LC-PUFAs may not affect the lipid profile of ε4 carriers, although supplementation studies suggest that these individuals do respond to moderate or high intakes of EPA and DHA. Responses may be dose-dependent. In a small study, carriers of the ε4 allele who consumed a DHA-rich oil (3.7 g DHA/day) for 4 weeks exhibited a 10% increase in LDL-C and total-C, but had no significant lipoprotein changes with an EPA-rich oil. Others reported a significant decrease in LDL-C in individuals with an atherogenic profile who consumed 6 g/day of EPA + DHA for 6 weeks and an increase in total cholesterol in ε4 carriers. A trend for greater responsiveness to EPA + DHA among men and in APOE ε4 carriers was noted in another study of fish oil supplementation. This observational report expands the data on the effect of APOE genotype on plasma lipids and lipoproteins and their particle sizes in the general population. It is also a reminder of the differences in lipid interactions with EPA and DHA in various APOE genotypes.   Liang S, Steffen LM, Steffen BT, Guan W, Weir NL, Rich SS, Manichaikul A, Vargas JD, Tsai MY. APOE genotype modifies the association between plasma omega-3 fatty acids and plasma lipids in the Multi-Ethnic Study of Atherosclerosis (MESA). Atherosclerosis 2013;228:181-187. [PubMed]