In end-stage renal disease, over 90% of kidney function has been lost. Hemodialysis has long been a solution to prolong the life of end-stage renal disease patients. Depressive symptoms and distress are very common in chronic hemodialysis patients with end-stage renal disease, with an estimated prevalence rate of 20 to 70%. Longitudinal studies have shown that the level of depression in hemodialysis patients is variable over time, and is affected by a multitude of personal, interpersonal and nutritional factors. Episodes of depression can negatively influence nutritional status and immune function, and can affect compliance of dialysis treatments. Potentially, the pathologies underlying renal failure, including kidney damage due to diabetes, hypertension, and some disorders affecting the glomeruli, may also be further aggravated. The somatic aspects of depression resemble uremia, an increase in circulating urea that is no longer cleared optimally by the damaged kidneys and by necessity is removed via dialysis. Systemic markers of inflammation are measurable in hemodialysis patients, and increased levels of circulating pro-inflammatory cytokines and acute phase proteins have been shown in depressed hemodialysis patients. Although depression, inflammation, and declining health may contribute to a significantly increased mortality observed in patients with end-stage renal disease on hemodialysis treatment, the precise causal relationships are difficult to establish. What is clear is that an opportunity and need to treat depression in end-stage renal disease patents has been identified to potentially offer a better quality of life and potentially therapeutic benefits to a demanding problem with high social and medical costs. Long chain omega-3 fatty acids EPA and DHA play central roles in the regulation of inflammation with research continuing to identify mechanisms. Increasing their intake from dietary sources or through supplementation supports anti-inflammatory actions under conditions involving acute inflammatory insult, and reduced risk of adverse clinical outcomes in a range of chronic inflammatory disorders, including hemodialysis patients. Several observational studies have shown that depressive symptoms are associated with low dietary intake of omega-3 PUFAs and low tissue levels. Supplementation with omega-3 PUFA, and EPA in particular, has shown considerable success in alleviating depression. The potential benefits for EPA/DHA in treating depressive symptoms in hemodialysis patients, and the association with lowering inflammation, have not been assessed.

An accurate assessment of depression is critically important in order to measure and establish the relationships between external factors, deteriorating health and depression. A clinical psychiatric evaluation of depression is not the same as a self-assessment of depression; the somatic and cognitive aspects of depression are tested in different ways, and although clinical depression may overlap with the recognition of depressive symptoms, a clinical diagnosis is made using different methodologies. Symptoms of depression are also not to be confused with distress, which is common in hemodialysis patients. The Beck Depression Inventory (BDI) is a test for depressive symptoms that employs self-rated scales for symptom frequency and severity. The BDI is therefore useful for the assessment of depressive symptoms, and can be validated and aligned with the clinical assessment of major depressive disorder. Structured clinical interviews are used in clinical research to validate major depressive disorder, such as SCID and MINI tests. The use of the BDI is therefore limited to assessing depressive symptoms. This study by Gharekhani and colleagues (Tabriz Medical University, Iran) addresses for the first time the question of whether supplementation with EPA and DHA has anti-depressive effects in chronic hemodialysis patients. In addition, the study measures potential changes in circulating cytokines and C-reactive protein in order to determine if changes in systemic markers of inflammation might be associated with omega-3 supplementation and depression. 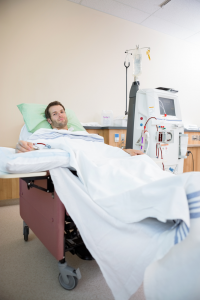 Adult patients on maintenance hemodialysis were recruited from two teaching hospitals. Stringent exclusion criteria were applied in order to obtain patients (n=54) who had a BDI score higher than 16 (depressed), and among other criteria, were not in a terminal stage, did not suffer from other psychiatric disorders or inflammatory or infectious disease, and had not taken omega-3 supplements in the last 3 months. Patients were randomly assigned to either an omega-3 supplementation or placebo group. The omega-3 supplementation consisted of a daily dose of 1080 mg EPA and 720 mg DHA in the form of 6 capsules. Placebo consisted of the same volume of paraffin oil in the same capsule format. The intervention trial was single blinded and lasted for 4 months. Compliance was assessed by capsule counts. Dietary habits were controlled to remain stable during the study, but blood omega-3 fatty acid measurements were not carried out in this study. At the start and end of the study serum samples were prepared and stored for analyses of C-reactive protein, interleukin-6 (IL-6), tumor necrosis factor-alpha (TNF-α), and IL-10, as well as ferritin and parathyroid hormone. Depression was measured with a BDI questionnaire, which had been validated for use in the Iranian population. A BDI score of ≥ 16 was used to estimate the lower limit of diagnosis of depression (the test outcome can range from 0 to 63). The two groups did not significantly differ from each other at the start of the trial with respect to age (~57 yrs), gender, dialysis history, the pathologies underlying the development of renal failure, or medication use. Patients in the omega-3 supplementation group had a slightly better dialysis adequacy (a measure of the quality of dialysis related to urea removal efficiency, length of dialysis session and ultrafiltration volume) than patients from the placebo group, but the difference was not statistically significant (P value .057). Mean and median BDI scores were the same between the placebo and omega-3 groups. Baseline parathyroid hormone was elevated in all subjects, pointing at secondary hyperparathyroidism as a consequence of permanent kidney damage, and ferritin levels were elevated, with a wide range of values over 200 pg/ml. After 4 months of supplementation, there was no change in BDI score in the placebo group (from 21 (4.7) to 20.3 (7.6); mean (SD)). In the omega-3 supplemented patients there was a highly significant decrease in BDI score (from 23.5 (7.5) to 13.4 (5.7); mean (SD), P value 0.001), which effectively classifies the patients that had received EPA/DHA as no longer having depressive symptoms.

In the placebo group the parathyroid hormone increased, possibly reflecting progressive hyperparathyroidism associated with renal dysfunction and hypocalcemia. Also ferritin levels increased in the placebo group, likely associated with inflammation and liver damage. In the omega-3 supplemented group these two parameters did not significantly increase from baseline, although baseline levels of ferritin were higher in the omega-3 group. Omega-3 supplementation induced a minor decrease in serum IL-6, but small differences in baseline levels between both groups are notable as well. Given the small yet apparent differences in some biochemical parameters between both groups, the evaluation of statistically signifcant differences between the omega-3 and control groups at the end of the intervention could be reinterpreted if the authors would correct for the observed baseline values of measured variables in each group. In subsequent regression analyses that aimed at determining the strength of association between different variables, the authors found a significant correlation between the BDI score and the supplementation with omega-3, but no other variables correlated with depressive symptoms. The use of omega-3 PUFAs did not correlate significantly with the levels of circulating cytokines. The level of C-reactive protein was possibly negatively associated with omega-3 use, but on the border of statistical significance. Omega-3 did, however, strongly associate negatively with ferritin level, suggesting that inflammatory tissue damage to the liver may be lower in the omega-3 supplemented patients. The study by Gharekhani offers a noticeable result that may be of practical use for the treatment of depressive symptoms in adults on maintenance hemodialysis with end-stage renal disease. The study has a few weaknesses recognized by the authors themselves, first, that dietary intake and omega-3 status has not been measured, and second, the study has a relatively small sample size. The outcome is in line with other studies that have indicated that supplementation with long chain omega-3 PUFAs can be of benefit in the treatment of symptoms of depression and potentially as adjunct to anti-depressive medication. A relationship between omega-3 supplementation and effects on systemic measures of inflammation could not be established. Other studies have reached similar and mixed conclusions collectively pointing out that it is difficult to establish a relationship between omega-3 dosing regimens and inflammatory cytokines. The effect on ferritin may suggest that supplementation with EPA/DHA has a tissue protective effect in hemodialysis patients. 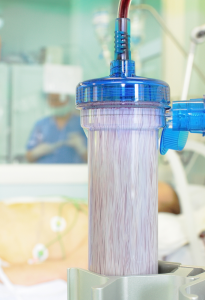 Hemodialysis introduces a distinctive variable and challenge to an omega-3 supplementation study where distribution of the absorbed EPA and DHA occurs via the circulation in the form of more complex lipids such as phospholipids and triglycerides, as well as free fatty acids and lysophospholipid bound to serum proteins such as albumin. Hemodialysis is performed several times a week, but it is not known if this procedure affects circulating omega-3 levels, potentially through removal of lysophospholipid and free fatty acids in equilibrium with serum protein binding sites. The results of this study suggest that daily supplementation with fish oil overcomes the potentially negative effects of hemodialysis on omega-3 status. A study that specifically addresses the effects of hemodialysis on omega-3 status and clearance is required. The near significant difference in baseline hemodialysis adequacy noted in this study reminds us that a study with a higher number of patients may also address the question if small changes in dialysis adequacy would skew the response to a better anti-depressant effect of EPA/DHA in these patients. This intervention used paraffin oil as the placebo. Although there was no further information provided with regard to the grade of this food-grade white mineral oil, there were no measurable adverse effects reported. Ultra-refined paraffin oil is used in Iran and other countries as an oral laxative for treatment of constipation in children, at much higher doses than used in the present study, and appears safe to use.