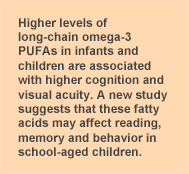 The intake of long-chain omega-3 PUFAs (n-3 LC-PUFAs) in most developed countries with low consumption of fish and seafood is well below the amounts recommended for adults and women of childbearing age. For example, in the U.S., adult intakes of n-3 LC-PUFAs are approximately 100 mg/day, with women of childbearing age consuming approximately 50 mg of DHA per day. International recommended intakes for pregnant and lactating women are at least 200 mg of DHA per day. In addition to the low consumption of n-3 LC-PUFAs, very high intakes of linoleic acid found in western diets may exacerbate the low tissue levels of n-3 LC-PUFAs observed in individuals consuming such diets. In an animal model, high dietary linoleic acid compromised the accretion of DHA in brain. Considering that DHA is essential for the structure and function of the developing brain, diets sufficient in DHA are critically important for pregnant and lactating women and their infants. Low n-3 LC-PUFA exposures in the presence of high n-6 PUFAs have been associated with developmental, cognitive and behavioral disorders and the risk of suboptimal visual acuity development in infants and children. On the other hand, supplementation with n-3 LC-PUFAs in children with attention or behavior disorders has been associated with modest improvements, though results are inconsistent and most trials were small. Children born with higher concentrations of LC-PUFAs and DHA at birth had fewer total difficulties and less hyperactivity or inattention at 10 years of age. Other studies have reported improvements in reading, spelling, learning or memory in children exposed to higher levels of n-3 LC-PUFAs in early life. A review of observational and intervention studies reported that supplementation with n-3 LC-PUFAs or DHA in particular was associated with higher scores for cognitive and visual function in children. In this report, investigators in the U.K. examined the cognitive and behavioral effects of n-3 LC-PUFA supplementation in healthy school-aged children who were underperforming. 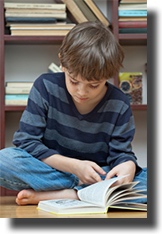 The participants were healthy 7- to 9-year-old children selected from 74 mainstream Oxfordshire primary schools who were below the 33rd centile on an age-standardized word reading test. This performance equates to reading at about 18 months behind chronological age. The study provided 600 mg of DHA per day for 16 weeks and assessed changes in reading, working memory and behavior. Of 1,372 children invited to participate, 362 were assigned randomly to consume 3 capsules per day containing either DHA or a placebo of soybean and corn oil. At the end, 359 children completed the trial. The primary outcomes assessed at baseline and at 16-weeks were reading, assessed by the Word Reading Achievement sub-test of the British Ability Scales II; working memory, assessed using the recall of digits forward and backward, which are also sub-tests of the British Ability Scales II; and behavior, which was assessed by teachers and parents using the Conners’ Rating Scales. These scales measure symptoms, especially as they relate to behavior or attention. After 16 weeks, differences in the reading scores were significantly higher for the DHA-group compared with the placebo group in children whose baseline reading scores were at the 20th or 10th centile or below, as shown in the Figure. Scores did not change significantly in the whole sample. The investigators reported a significant interaction between subgroup and treatment group, which was considered in the subgroup analysis. 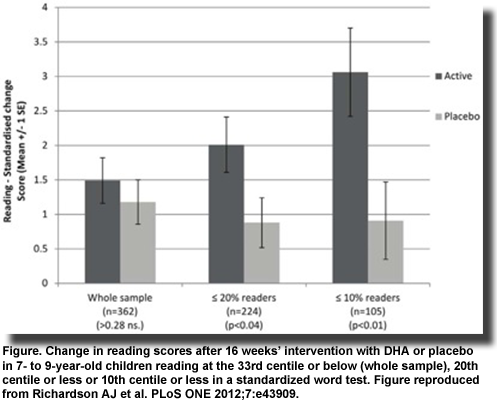 After the intervention, changes in working memory scores for backward or forward recall of digits were not significantly different between the DHA and placebo groups in the total sample or in those with baseline reading scores below the 20th centile. Changes in behavior outcomes were different for parent-rated compared with teacher-rated assessments. Parent-rated scores were more likely to reflect improved behaviors in the DHA versus the placebo group for 6 of the 7 global scales of behaviors, such as ADHD index, restless-impulsive and emotional liability. Similarly, parents scored improvements in 2 of the 7 sub-scale assessments. In contrast, teachers’ scores indicated no significant differences in behaviors between the two treatment groups or in the groups with lower reading scores. Putting the most significant effect of DHA supplementation into perspective, the investigators noted that the improved reading scores in the children performing initially at or below the 20th centile was equivalent to a gain of 0.8 months in reading age. With scores typically improving by 4 months over the 16-week study, the additional gain of 0.8 months is equivalent to an additional 20% increase in reading age. Similarly, in the lowest reading group at or below the 10th centile, the equivalent gain was 1.9 months or about 50% higher than expected. These investigators have previously reported improved reading scores in children with developmental coordination disorder who were supplemented with n-3 and n-6 PUFAs. Others did not observe improved reading scores with n-3 LC-PUFA supplementation in children 8 to 10 years of age. In 12-year-old children with attention deficit hyperactivity disorder, higher red blood cell DHA content was associated with improved reading scores, particularly in a small subgroup with learning difficulties. However, there was no overall effect of treatment on reading between the n-3 LC-PUFA-treated and placebo groups. 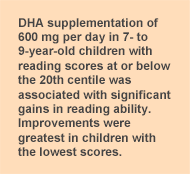 There were no significant differences in working memory assessments in the two groups. Actual scores for the digits forward recall were higher in the DHA group, but changes in the scores over the study were not significantly different. Differences in behavior assessments between parents and teachers have been reported in other studies, including those involving n-3 LC-PUFAs. Settings, duration and individual attention vary in the two assessment conditions, which probably contribute to the different assessments. The authors suggest that this study may apply more broadly to the mainstream school population than trials involving participants from clinics or community volunteers. Children came from diverse socioeconomic backgrounds, but were predominantly Caucasian. Its primary finding that DHA supplementation with 600 mg per day might significantly improve reading ability and behavior in healthy 7- to 9-year-old school children reading at or below the 20th centile reinforces the importance of n-3 LC-PUFA consumption for cognition and development well past infancy and childhood.   Richardson AJ, Burton JR, Sewell RP, Spreckelsen TF, Montgomery P. Docosahexaenoic acid for reading, cognition and behavior in children aged 7-9 years: A randomized, controlled trial (The DOLAB Study). PLoS One 2012;7:e43909. [PubMed]